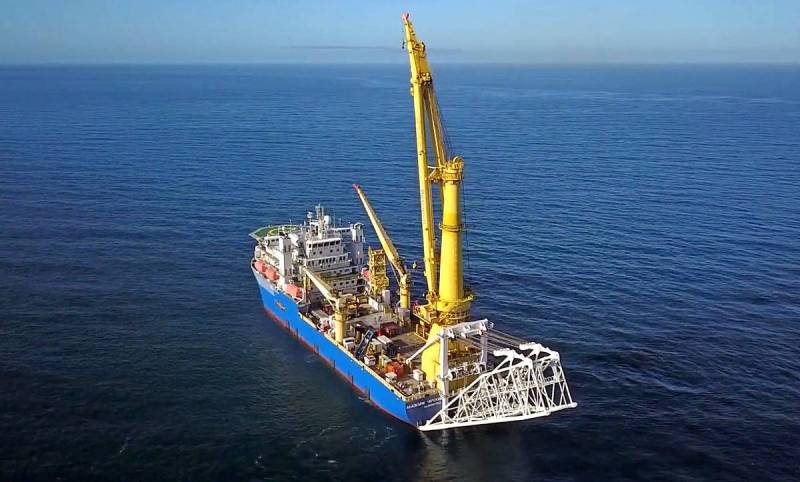 The Odyssey of Academician Chersky continues. The pipe-laying vessel once again changed its route, indicating the Egyptian Port Said in the Mediterranean Sea as a new target, despite the fact that they were waiting for it in the Baltic. It is understood that all this is a "cunning plan", the purpose of which is to deceive the US Treasury Department, without giving the "naive" Americans the opportunity to impose sanctions against our only ship capable of completing the Nord Stream-2.


Yes, this scenario seems to be the most likely, but still consider alternative ones.

This is by far the most realistic scenario, according to which the Academician Chersky will eventually reach the Baltic, undergo re-equipment and complete the remaining small section of the pipeline. In his favor says that in the English Channel the vessel is already waiting for the Akademik Pashin tanker, and the sea tugboat Nikolay Chiker has approached the coast of Portugal. Apparently, they should refuel the pipelayer and the accompanying watchman “Yaroslav the Wise”, who will then proceed through the Danish Straits to the Baltic, where they will be met by the ships of the Baltic Fleet. 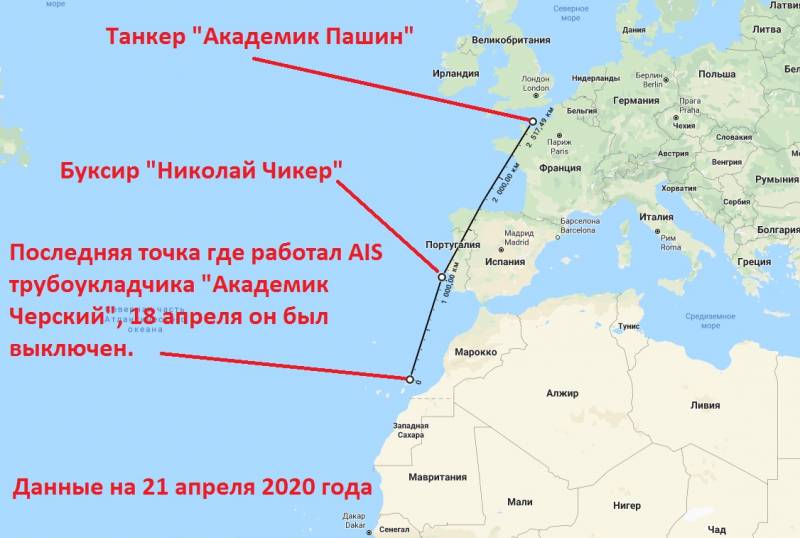 Such a slow pace can be explained by the fact that it is better to carry out construction in the summer, when the sea is calmer, and this year Nord Stream-2 is not especially needed by anyone. As soon as Akademik gets to work, he and the entire Gazprom Fleet participating in the completion will be subject to US sanctions.

A slightly less realistic option is that the Akademik Chersky will not complete the gas pipeline, but the Fortuna and Defender pipe-laying barges. The problem of the lack of a dynamic positioning system on them can be solved in two ways. The first is a rigid fixation by their system of anchors or a hitch with a vessel having a similar system. Analysts of The Jamestown Foundation, an organization that is now undesirable in Russia, wrote about this scenario.

The second is to make concessions from the Danish side with the help of Gazprom’s European partners, so that they give permission to lay the pipes to Fortune and Defender. The wanderings of Academician Chersky in this case are an informational background designed to divert attention and at the same time put pressure on Copenhagen.

The Eastern Mediterranean is currently the focus of new energy projects. Rosneft is very interested in the Zohr gas field in Egypt, and the Russian authorities are interested in the Syrian oil and gas shelf. Theoretically, the "Academician Chersky" could be useful there.

This is the most conspiracy theological theory. According to it, having completed the retrofitting in one of the Baltic ports of Russia, Akademik Chersky will turn around and head back to the Far East, and Nord Stream-2 itself will be put on a long pause. Today, such a scenario may seem wild, but everything is somewhat more complicated than it seems at first glance.

Russia, with its critical dependence on oil and gas revenues, has found itself in a real systemic crisis. Oil quotes of recent days cause a rash. Black gold prices have become negative, it is clear that this is temporary, but this indicates a global energy crisis. It is necessary to remove from the market 20, or even 30 million barrels per day, in order to bring the cost of the barrel to an acceptable level.

Earlier, Russia was forced to agree to reduce production by 2,5 million barrels, taking on the largest quotas, judging by the level of early March. But now the situation is such that these volumes will have to be doubled, which means de facto the cessation of Russian oil exports taking into account domestic consumption. We must either fight without fools with the United States and its allies, or somehow re-negotiate with them.

In this situation, pausing the completion of the Nord Stream-2 pipeline could be a bargaining chip for a United States agreement to reduce oil production to remove the required 20 million barrels from the market. Of course, the United States will not bind itself with any legally binding agreements, especially since cartel conspiracies are prohibited there at the legislative level. In the event that global growth begins economics American shale producers will simply increase production volumes, which will be difficult for countries limited by quotas under OPEC +.

If this assumption is true, then Nord Stream-2 will really turn into a real long-term construction, directly dependent on the fate of the oil agreements. Then they will start completing it only after normalizing the situation in the “black gold” market, when all players will be able to start increasing production. It is possible that we will soon hear a lot of expert assessments about why so far you can’t rush into Nord Stream 2. What for? After all, we “replayed” Ukraine by concluding a transit agreement for 5 years, and gas consumption is declining due to economic problems in Europe.
Ctrl Enter
Noticed oshЫbku Highlight text and press. Ctrl + Enter
We are
Peace enforcement operation. Russia inflicts a preemptive strike on Kiev
US Global Economy: An End That Sneaks Noticeably
Reporterin Yandex News
Read Reporterin Google News
Ad
The publication is looking for authors in the news and analytical departments. Requirements for applicants: literacy, responsibility, efficiency, inexhaustible creative energy, experience in copywriting or journalism, the ability to quickly analyze text and check facts, write concisely and interestingly on political and economic topics. The work is paid. Contact: [email protected]
50 comments
Information
Dear reader, to leave comments on the publication, you must to register.
I have an account? Sign in