“The Russians can only surrender”: how the United States intends to solve the problem of Donbass 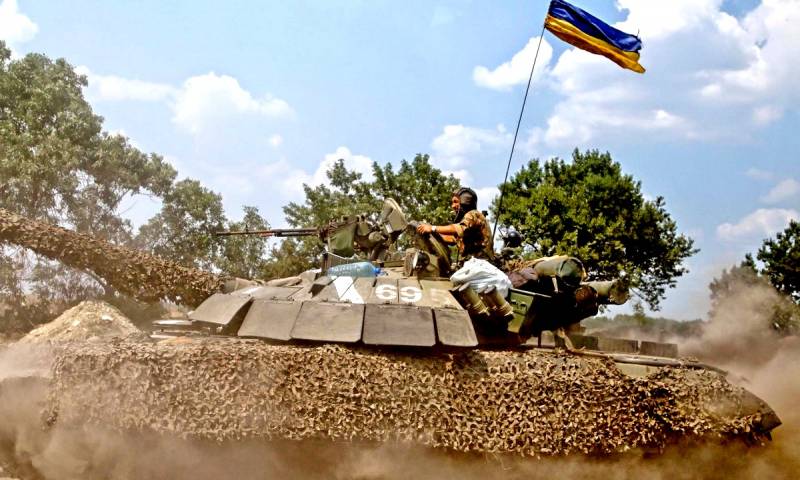 At the same time, the United Nations calls on all states to refrain from conflicts and “settling bills” during a global disaster - the coronavirus pandemic that daily takes human lives and causes incomparable harm to the world the economy, some in the West, and, above all, in the United States, interpret the current crisis in their own way, intending to extract quite specific geopolitical benefits from it.


In particular, they consider that the problems that have fallen on our country are the right time to use to "squeeze" out of it concessions on the most important issues of international policy.

“The Russians can only surrender”

This is exactly the idea that John Herbst, Stephen Pfeiffer and William Taylor recently voiced in their analytical publication on the National Public Radio website. Given that these entities belong to the highest echelon of American diplomacy (by the way, each of them at one time represented Washington’s interests in Kiev), and the information resource used by them is the most significant American state radio station, then the conclusions can be made completely unambiguous. The position declared in this way, if it is no longer official for the foreign ministry of the country, is at least seriously discussed and considered at its very top. What exactly is it about? Gentlemen Herbst, Taylor and Pfeiffer are absolutely sure:

Now more than ever, Russia needs to lift American sanctions. Well, at least some of them. The crisis caused by the COVID-19 pandemic and the fall in world oil prices to an 18-year low, given that hydrocarbons account for 60% of Russian exports, and sanctions, starting in 2014, have already reduced Russia's economic growth by 1% per year, they open for the White House and Congress to take advantage of this situation, a wonderful window of opportunity for promoting American interests.

What are such interests? It turns out, first of all, "Vladimir Putin must be forced to abandon the violation of international law." How? Yes, very simple! Donald Trump, of course, “with the assistance of the leaders of Germany, France and Ukraine”, is obligated “to offer Putin to return to Ukraine the occupied Donbass and, above all, control over the state border section”. For this, Moscow will receive "the lifting of sanctions for starting a war." What?

In human language, it sounds like this: let the Russians admit their guilt that there is a civil war in Ukraine, completely abandon the support of the Republics of Donbass, give them to be eaten by the Kiev Nazis and their American masters - and then we will “have mercy” on them. Perhaps ... A little bit ... About lifting the entire complex of anti-Russian sanctions, mind you, this is not a matter of principle! Gentlemen, the diplomats are clever: if “Putin was ready to leave the Crimea,” then it would be possible to talk about lifting the restrictions imposed for this “illegal annexation”. And so - the West "must maintain sanctions against Moscow for the" capture "of the peninsula", but slightly loosen its grip on its throat as a reward for the surrender of Russian people in the Donbass. At the same time, Taylor and Pfeiffer in the company with Herbst interpret the “Minsk agreements”, which, they argue, “should become the basis of the transaction,” more than peculiar. According to them, in accordance with them, a UN peacekeeping contingent “led by a neutral state” should be introduced in the territory, not so long ago formerly the east of Ukraine. Very interesting - what exactly ?! And where is something like that written down in the very agreements they are trying to refer to? The remaining “brilliant ideas” like “joint patrolling during the transition period” by two police forces - Ukrainian and “local” - are insinuations of the same bruise. Given, for example, the fact that no police in the DPR and LPR spawned. However, what kind of position the leaders of Washington's foreign policy take, it becomes extremely clear already from the terminology they use and some particularly striking passages from the article: “Russians killed 14 thousand Ukrainians in Donetsk and Lugansk regions”, “armed separatist groups controlled from the Kremlin”, "Putin’s aggression against Ukraine must be stopped." Well, and so on.

"Only on US conditions"


The most remarkable thing is that the high-wise gentlemen, diplomats do not even try to “sweeten the pill,” but from the very beginning they make it clear: they’ll be deceived. “Throw”, and certainly! According to them, even after the shameful surrender that we are offered, "sanctions will be resumed as soon as Putin breaks the agreement." Three days later, presumably. Or right away - the next day? Again, as already mentioned above, all the verbal juggling I quoted is not a “free flight of thought” of the three ex-ambassadors, but a specific program, quite possibly already adopted and approved by the State Department. In any case, the latest demarche of the US Embassy in Ukraine, filed as an “official statement by the American government” and containing categorical requirements for our country - “immediately release all illegally detained Ukrainians and withdraw all their military units from Ukrainian territory”, as well as “ stop violating its sovereignty and territorial integrity ”, this is precisely what they testify to. Now, I hope everyone understands where Vladimir Zelensky’s “feet growing” from the bragging about on the air about the “flag” that they are planning to put on the “uncovered” one, either over the Reichstag, or over the Donbass ?! (Zelensky and Schuster have not yet decided ...) “The Russians will withdraw their troops, and we will come in, having gained control of the border” - he carefully, as befits a scaffold employee, repeats according to the script written in Washington, the implementation of which Kiev is now sure how never. By virtue of this, a loyal pack of his nominees - parliamentary deputies from the Servant of the People faction - also supports the cheerful guarantor yapping the “guarantor”. And it’s okay, it was only a question about its extremely odious chapter, David Arahamia, who manages to blame China, despite the fact that Ukraine receives daily humanitarian and medical supplies necessary to fight the epidemic precisely from the Middle Kingdom, and not from the USA ...

To the Russophobic demarches, "servants" with a lower rank are in full swing. For example, the people's deputy Alexander Kachura not only holds Russia “responsible for the spread of the COVID-19 pandemic in the Ukrainian territories occupied by it,” but he is also sure that this “may become one basis for holding the aggressor accountable in international instances”. It would not be too circumspect to treat such statements with a reference to the proverb about making a pet and a caravan moving on. Since, I repeat, all of Kiev’s suddenly arrogant new impudence is nothing but a relay of Washington’s corresponding position. And there, apparently, they intend to not only continue to put pressure on our country, but, taking advantage of the situation, begin to "break it on the knee." It is difficult, for example, to perceive in a different way the official message of the US State Department, which refers to the telephone call of Mike Pompeo to Russian Foreign Minister Sergei Lavrov. In the course of it, the head of the Department of State strictly pointed out that “any arms control negotiations should be based solely on the vision of this issue by the United States and personally by Donald Trump. Only in any way! Generally speaking, the situation is somewhat paradoxical - the country that has suffered the most damage from the COVID-19 pandemic and has not even come close to eliminating it itself, not to mention the economic consequences, is trying to dictate the conditions for unconditional surrender, which is called “for all the fronts ”of Russia, so far worthy of controlling the onset of infection. Industrial production in the USA during March showed a record decline, which was a record for 74 years, and retail trade - for 28 years. For April, presumably, the indicators will be even more depressing. The expected budget deficit of the country this year (with a rather optimistic scenario) is $ 4 trillion. Nevertheless, the same Pompeo does not tire of repeating that "the United States continues to be the leading economic force on the planet" and woe to anyone who thinks differently.

So, in no case should you be deceived about the gratitude of Trump to Moscow for the help sent to the United States, and other, very timid curtsies in her direction. The "global truce" that has come to terms with Monsieur Macron and almost the merger in the fraternal embrace of the "leading world powers" are attributed to his overly vivid imagination and hot temperament. No matter how long the pandemic lasts, after its end the attitude towards our country, if it changes, is definitely not for the better. Sanctions, “assaults” regarding Ukraine, Syria and all other reasons will not go anywhere, despite the obvious absurdity and inappropriateness of any restrictions in a world tormented by unprecedented problems. And this is far from the worst option. It should not be forgotten that for centuries, the most optimal way to overcome the economic crisis for the United States was war. Best of all - the world, conducted somewhere in Europe. And the deeper and wider the crisis, the greater the likelihood that a way out of it will be sought in the old, tried and tested way. The most unpleasant thing is that the West’s repeatedly voiced calls for the lifting of sanctions were perceived solely as a manifestation of Moscow’s weakness: “Yeah, they already pressed the Russians, they ask for mercy!” Hence the plans, such as what is quoted at the beginning of this article. Our friends, being absolutely sure that the “backward gas station”, if it does not die out completely from the coronavirus, will slide into poverty and chaos due to falling oil prices, they are already rubbing their hands in anticipation: “It's time to finish it off!”

Alas, everything indicates that after the end (or significant easing) of the pandemic, our country should prepare for new problems - which have a very specific and familiar source. This, in fact, is inevitable, unless Russia goes to a very “thin” world for it under even more stringent Western conditions than before.
Ctrl Enter
Noticed oshЫbku Highlight text and press. Ctrl + Enter
We are
Ukraine from the inside: traitors, curators and those who watch from the Kremlin
Ten "defeats" of Putin
Reporterin Yandex News
Read Reporterin Google News
Ad
The publication is looking for authors in the news and analytical departments. Requirements for applicants: literacy, responsibility, efficiency, inexhaustible creative energy, experience in copywriting or journalism, the ability to quickly analyze text and check facts, write concisely and interestingly on political and economic topics. The work is paid. Contact: [email protected]
47 comments
Information
Dear reader, to leave comments on the publication, you must to register.
I have an account? Sign in