Ukraine almost arranged a new nuclear disaster for its neighbors 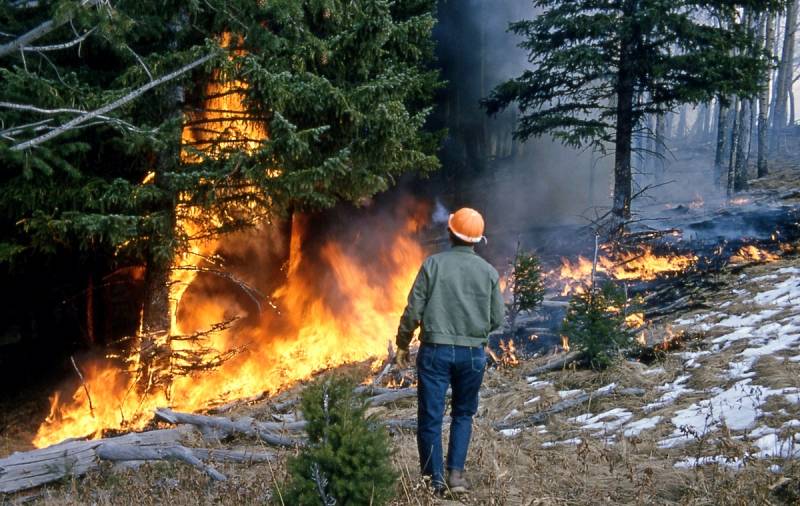 Against the backdrop of the global coronavirus pandemic, ongoing disasters in energy markets and the like, global and completely joyless News, somehow the messages were lost that the neighboring Ukraine almost struck an ecological catastrophe, the consequences of which would have clearly responded to the countries located next to it - and this is only in the best case.


With the worst case scenario, the word “Chernobyl” would have been forgotten pretty much against the background of current adversities. What exactly happened in the "nezalezhnoy" and why?

Discussions that a fire-hazardous period begins in the country caused by a snowless, “dry” and fairly warm winter were held in Ukraine in the month of February. They were also well aware of the danger at the official level - in any case, the press service of the Chernobyl Radiation-Ecological Biosphere Reserve issued a corresponding appeal to fellow citizens, urging them to be “careful, vigilant and responsible” when dealing with fire, which “could turn into a forest fire in minutes ”. As often happens, the call was either ignored or perceived by some particularly alternatively gifted individuals as a guide to action exactly the opposite. And the fire ignited! The first official reports that forests burn in the Chernobyl exclusion zone appeared on April 4. Considering that even then it was a fire that covered a territory of 20 hectares, two firefighting aircraft were transferred to extinguish it from the city of Nizhyn, we can assume that it started still earlier, but until some point, as usual, they hoped to the fact that "itself goes out." Not extinguished ... From that day began a colossal marathon - hellish labor and mortal risk for some of its participants and shameless cynical lies - for others. It should be noted that the representatives of the current “unbounded” government, simply adoring to cherish and curse everything “shovels”, immediately surpassed the Soviet and party functionaries of the Ukrainian SSR, in 1986 desperately trying to convince citizens that “nothing was wrong” in Chernobyl. Despite all the firefighters' attempts, the scale of the catastrophe was growing and already a couple of days later Kiev was covered in a caustic and stinking haze. This is not fiction, but what I personally saw with my own eyes and inhaled, alas, my own lungs. Authorities claimed that "everything is under control" ...

On April 6, there were already two centers of ignition. 13 - at least three ... Why these fires occurred, it is now unlikely to be able to establish for certain. Subsequently, a local resident was detained in the area of ​​the disaster in the village of Vladimirovo, located in the Kotovsky forestry area, admitting that he had fallen on dry grass like gunpowder and let last year's grass ... "for fun"! Another "genius", also from the locals, allegedly burned grass near the house, after which he threw still smoldering remains onto an overgrown pasture outside the village - this flared up. Both explanations are striking in their idiocy, but it is because of this that they look quite believable. However, a bit later on the Internet there appeared photos taken of about one of the fire places scattered homemade torches scattered in the forest. But this is a completely different conversation, and here it smells of deliberate arson. True, it is completely incomprehensible with what purpose and for what perfect. The chairman of the Association of Chernobyl Tour Operators (there is one, imagine), a member of the public council at the State Agency for Management of the Exclusion Zone, Yaroslav Emelyanenko subsequently called the incident a "terrorist attack", since all the radioactive rubbish accumulated in the area with smoke and products rising into the sky burning, now "spread to large cities", in fact, in general, is right. However, the talk here most likely is still not so much about evil intent as about the ruthless regularity that manifested itself this time in the form of a fiery catastrophe. The matter, by and large, is not in cretins, "having fun" or "cleaning up" in ways that could cause a natural disaster, but in the complete absence of even the slightest efforts to ensure that it does not happen or, at least, does not have huge scales.

Even people who do not have specific knowledge in forestry, but have at least an initial understanding of the principles of fire safety, know that in order to prevent forest fires, a number of very specific measures must be taken - plowing fire strips, cutting down and clearing forests of drylands , other things like that. In Ukraine, practically no one has been doing this a long time ago (the last six years - so sure). Foresters' salaries are scanty, technique (if there is one at all) crumbles on the go, fuel "close to" for it, so there is simply no one to open the protective strips on. However, in such a deplorable way, the situation is not only with forestries obliged to prevent fires, but also, in fact, with firefighters, who must extinguish them in case of occurrence. Their equipment fleet is limited and consists for the most part of hopelessly outdated models (the same aircraft had to be pulled from almost the whole country), there are not enough people, because there are no crowds of hunters on the meager salaries of the State Emergencies Ministry. About how cruel the "personnel shortage" in the ranks of rescuers, as well as about the "excellent" conditions of their service, is evidenced by the data on the transfer to the area of ​​fires in the exclusion zone of the National Guard forces, as well as bypassed the entire Internet pictures of firefighters themselves, sleeping directly on bare ground near their own cars. The lack of people makes them “plow” until they fall off their feet. One of the most interesting moments in all of this is the reaction of the parliament to the ground. The Verkhovna Rada in the "fireman", sorry for the pun, adopted the law ... No, not about raising the level of pay for firefighters or improving the funding of their departments! From now on, in accordance with Law No. 2339, a fine of up to 153 thousand hryvnias (more than 5 thousand dollars) can be fined for setting fire to grass or forest, or sent to jail for five years.

Will such draconian measures save Ukraine from new fires and other disasters? There are very big doubts about this. The same fines (and quite considerable) existed in the legislation before - really helped? Since the beginning of this year, about 800 forest fires have been recorded in the country. And it cannot be otherwise where both the law enforcement system and the state as a whole are in fact in a state of complete collapse. Here, by the way, about the state ... As already mentioned, its official representatives - from the capital's mayor to the president, have noted themselves over the past ten days with completely shameless lies. The very famous pearl of his eloquence, Vitali Klitschko repeatedly began to convince the townspeople that the radiation situation in the city “is within normal limits, completely without any deviations”. It can be said, even good for health. And this is despite the fact that the fire covered the infamous Red Forest - one of the most radioactive objects in the Chernobyl zone, which took over almost the main "portion" of deadly dust after the explosion of the reactor. However, according to meteorologists, the largest mass of smoke from the burnt Red Forest was attributed not to Kiev, but towards Belarus. Well, Alexander Grigoryevich can warmly thank his Ukrainian friends for such a “gift”. According to official figures, the villages Leliv, Kopachi, Polesskoye, Grezlya, Rudnya-Grezlyanskaya, Kovshilovka, Varovichi, Buda-Varovichi, Martynovichi, burned to the ground in the "resettlement" zone (where it is impossible for people without danger to life and health) Smaragdovy, Volkhov and Chistogalovka. And all this - “without exceeding the background radiation values”, as the Red Bulls from the press service of the State Emergencies Ministry convinced them, demanding that their fellow citizens “not disperse the bomb” ?! It is believed with great difficulty, or rather, it is not believed at all.

The most unpleasant thing in this whole story is that, contrary to all desperate measures, the fire almost came close to Pripyat itself and, accordingly, turned out to be in close proximity to the Chernobyl nuclear power plant, and to the radioactive waste storage facilities, the contents of which are more than enough for to forever poison half of Europe. If not all of it. Official representatives of authorities literally at all levels stubbornly denied such information, however, in the age of the Internet and mobile devices, the attempt to "hide in the bag" some kind of information "awl" is obviously hopeless. Photos that appeared first on social networks, and then in Ukrainian and other media outlets, photos of Pripyat smoked with smoke, as well as satellite images of the fire, did not leave stone unturned from lies. Moreover, Western publications have already joined in the coverage of the issue, whose publications declaring it to be “Kremlin propaganda” or “separatist assault” was somehow out of hand. I had to connect to one of the main “non-down” liars - Avakov’s deputy Anton Gerashchenko, who began to convince fellow citizens that “nothing will be done” to the nuclear waste storage facilities, even if they were “burned with napalm”. The fellow citizens, who know very well that if Gerashchenko swears in something and swears especially zealously, his words should be interpreted in the completely opposite sense, they realized that the matter was really bad and deeply depressed ...

The rain saved the situation. The most common rain that fell on April 14 on charred earth and a blazing forest. Even the President of Ukraine Vladimir Zelensky was forced to admit “weather assistance” in his speech, on the tenth day of an emergency of a catastrophic scale deigned to draw attention to it. According to him, “six centers of ignition” (six already!) Self-extinguished and there are no more threats to storage facilities and Chernobyl. As of the present moment - it’s possible ... However, how many and exactly which radioactive elements in ten fiery days went from the exclusion zone not only to the territory of Ukraine itself, but also to Belarus and Russia - this question remains open. As well as another, no less intriguing - what will explode, collapse, or catch fire in the "next winter" next time? On its territory, where in the past the very significant industrial, military, and scientific potential of the USSR was located, many objects are in ruin and utter negligence, on which emergency can deliver a “headache” to at least all neighboring states. Take, for example, the Pavlograd Chemical Plant, where the terrifying volumes of expired rocket fuel in need of disposal are concentrated. At that time, the Americans promised to help with this issue, and then they somehow changed their minds. What if the next fire breaks out there ?! Will we wait for the saving rain?
Ctrl Enter
Noticed oshЫbku Highlight text and press. Ctrl + Enter
We are
The monument to Marshal Konev is not demolished by Czech Russophobes, but by Russian propaganda
Where is Russia going?
Reporterin Yandex News
Read Reporterin Google News
Ad
The publication is looking for authors in the news and analytical departments. Requirements for applicants: literacy, responsibility, efficiency, inexhaustible creative energy, experience in copywriting or journalism, the ability to quickly analyze text and check facts, write concisely and interestingly on political and economic topics. The work is paid. Contact: [email protected]
3 comments
Information
Dear reader, to leave comments on the publication, you must to register.
I have an account? Sign in