Why oil Brest Peace is the best scenario for Russia 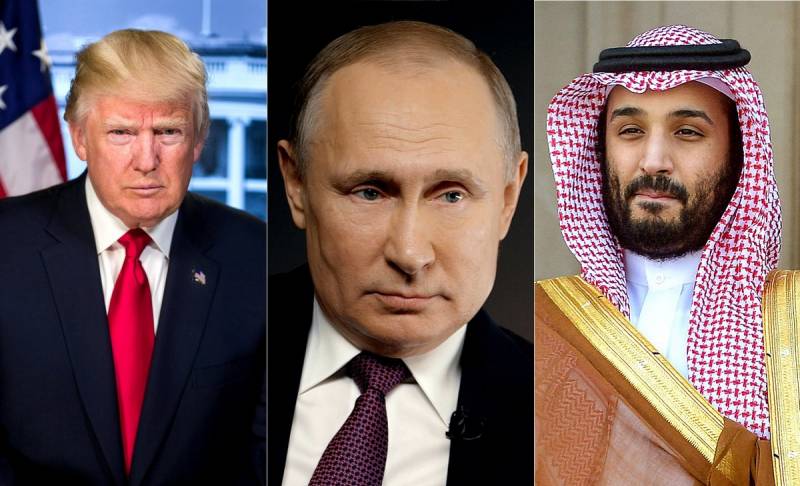 Today, after the announcement of an agreement on an unprecedented reduction in the production of “black gold” by all of its significant exporters, commentators of this event distinctly divided into three categories. The first can be attributed to those who sincerely rejoice that the countries that came together on the eve of a fierce confrontation managed to come to at least some kind of compromise and thereby at least halt the fall in world energy prices. The second is mainly representatives of the expert community, who believe that optimism is inappropriate here, or at least premature. The deal is good, but it is unlikely to be able to seriously affect something.


Well, and finally, the third group is those who see in everything that’s happening not a unique chance to stop the destructive processes in the global hydrocarbon market, which threatened to completely bring it down, and then the whole world, which is desperately balancing over the abyss today the economy, but exclusively “defeat”, “rout”, “shame” and so on. Moreover, they attribute all these extremely unflattering definitions and epithets to just one country. That is - Russia. Alas, there are plenty of supporters of this view of things in our Fatherland.

The funny thing is that the vice president of PJSC LUKOIL Leonid Fedun, who draws parallels between the new OPEC + deal and Brest Peace, either simply doesn’t understand the history too well, or expresses himself so floridly that his words are quoted with pleasure, reinterpreted in their own way, the obvious enemies of our country. But meanwhile, if the current agreement to reduce oil production in the long term leads to the same results as the document signed 102 years ago on the withdrawal of our country from the First World War, it would be very good! Why? I will try to justify my point of view.

"The obscene world" or the death of the country

In order to understand whether Mr. Fedun weighed the Russian negotiators who concluded the current deal on oil a delicious moral “slap in the face”, or made them a very flattering compliment, it is necessary, first of all, to recall what exactly the representatives of Soviet Russia put their autographs on Brest-Litovsk March 3, 1918. At the same time, I immediately propose to agree - schizophrenic versions like the one that thus “Lenin and the Bolsheviks worked out the money of the Kaiser General Staff received for the revolution and travel in the famous sealed carriage”, we will not consider. This is for psychiatrists and pseudo-historians. Let's talk about the real premises and results of the agreement. We’ll start from the first. Yes, the leader of the world proletariat personally called the "Brest Peace" nothing but "obscene." Nevertheless, the main thing in this case is not emotion and a clear answer to the question: “Could our country continue to fight against Germany, Austria-Hungary and Turkey in the prevailing at the beginning of 1918?” The answer is clear: no. No, again no and absolutely no. The army no longer existed as such. With allegations that the "Bolsheviks" spread it out, I am again addressing the medical specialists of the profile mentioned above. Once upon a time, it was documented that the Provisional Government handled this task (as well as starting the processes for the territorial collapse of the Empire). In fact, the German troops, well-armed, equipped and at that time maintaining iron discipline, stood on the threshold of Petrograd, which there was no one to physically defend. An alternative to the "obscene" world was the complete destruction of the country, the loss of statehood, the death of Russia. There were no other options other than in the sore brains of the political opponents of Lenin and the company.

Yes, humiliation was burning, shame immeasurable, territorial and material losses - colossal. But there is, in the end, a difference - to lose a lot or lose everything ?! I will not go into relishing all the terrifying disadvantages for our country of the "Brest Peace", I will allow myself to proceed immediately to somewhat more distant prospects. This "abomination" lasted only until November of the same 1918. After that, in the fire of their own revolutions, all three empires perished, that in Brest-Litovsk they enjoyed their “victory” - the German, the Austro-Hungarian, and the Ottoman to the heap. Half of the promised indemnities was not paid, but German comrades from the Ukrainian, Belarusian and Russian territories that were seized didn’t have time to properly squash the bread on our bread, lard and bulbs, quickly sank the Nakhter Vaterland and sign much more shameful and the horrific Versailles agreement. Well, perhaps the Poles were pissed off by picking up something from the "ownerless" to their grabbing hands, but they also did not have much time to rejoice - exactly until 1939, when we all returned it. The main thing is that the story with the Brest Peace did not end in 1918, but on May 9, 1945, on the ruins of the Reichstag. Finally, the point in the case of the “obscene” world, signed at the request of Lenin, who turned out to be much more perspicacious, was put by his faithful comrade-in-arms Stalin, who once and for all very specifically explained to Europe all about territorial and other claims to our Motherland. Why all this historical digression, you ask? And besides, the Brest Peace ultimately turned out to be in Russia's favor, thanks to which it saved itself from destruction and gained time to prepare for revenge. But the current conditions, alas, painfully resemble the very critical situation of a hundred years ago - what is there to hide. Well, with the story finished, let us now turn, in fact, to the economy.

"The obscene OPEC +" or the collapse of the economy?

The agreement now concluded to reduce OPEC + oil production by 9.7 million barrels per day will require our country to reduce the activity at its drilling facilities by 22.7%, pumping 2.5 million barrels less per day. Is it a shame? To the horror! Unprofitable? Not the right word ... However, to agree with Bloomberg, which, excuse me for the expression, itches without blushing that the agreement is “disastrous for Russia” and represents its “painful failure”, is also impossible. As well as not arguing with those who have already erected a whole myth that "Sechin is to blame for everything, who in March did not agree to an agreement of 0.5 million barrels per day." But how much can you try to put the cart in front of the horse and issue an investigation as a cause! Is it really not clear that the extension of the previous deal to reduce production (with its expansion) would have absolutely nothing saved and corrected! Prices would not have fallen ?! Collapsed, how cute! The main “killer” of oil demand, which has generated not only monstrous dumping, but also the physical overflow of black gold storage tanks around the world, is not the expansion of “revengeful Arab guys”, but the coronavirus epidemic. Already, serious people in oil-producing countries recognize that they will have to “tighten the tap” not by 10, but by all 15, or even 20 million barrels per day! But ... The worst thing - and this, too, may be completely insufficient. Alas, Bank of America analysts predict that the fall in demand for “black gold” may not be the expected 16-17%, but all 30-40%. Their counterparts at Goldman Sachs are somewhat more “optimistic” - they talk about a 19% decrease in consumption in April-May, but they nevertheless claim that no reduction in production will close this gap in the markets and will not stop the fall in prices.

Yes, Russia agreed in March to reduce by as much as you want - today this topic would have arisen again! The current agreement is not the end of the oil war. Not the finale of the economic tragedy called "the fall of" black gold ", but only his next act. Or intermission in it - as anyone likes. Set your own rules in the markets, fight for a place in them and dictate the price policies there will be those exporters who come to what a still close end to the global COVID-19 pandemic with the least “sagging” economies and the preserved potential of its own “oil industry”. Today, Russia's position on the fight against the virus is much better than that of the United States. What will happen in a month or six months? I do not know! And no one knows. However, one thing is clear - the challenge now is to survive. Both in a purely physical and economic sense. And what about the assurances from time to time that “the United States was the biggest winner” and that “it was not possible to squeeze shale oil” ... What would they object to, and at the same time very clever Bloomberg, who made Russia the only loser? Here, perhaps, only the American argument will fit - and not immediately in the “voices of the Kremlin” will be recorded again. Well, if you please, the US Energy Information Administration (EIA) estimates that US oil production this year could drop by 0,5 million barrels per day, and in 2021 by another 0,7 million barrels per day. But other calculations: according to the Kansas City Fed, if the price of WTI crude oil averages $ 30 per barrel, about 40% of the state’s oil and gas companies will be insolvent over the next 12 months. Standard Chartered at this cost of "black gold" predicts a decrease in oil production in the US by 4 million barrels per day by the end of 2021. Well, and finally, the main thing - according to estimates by the same EIA, the United States will return to becoming a net importer of oil and oil products in the third quarter of this year, and will remain in this status until at least 2021! Here it is - a long-term perspective ... I am not saying that this data is the ultimate truth, and that we must pray for it - but this, I emphasize, is the data of American industry experts and analysts. Maybe they know better?

Otherwise, you can even get to the level of "sources" like a certain Oleg Belokolos from the "unfathomable", enthusiastically broadcasting that "the Kremlin lost the oil war to the West." The head of the board of the "Maidan of Foreign Affairs", by the way. He begins his fantasies by re-singing all the same ideas about “Russia's destruction of its reputation and budget” and “US invincibility”, and it ends in general enchantingly. It turns out that the final kirdyk of the "gas station country" he hates will inevitably come, even if oil prices soar again! This is how, by 2050 (!) The year “more than 50% of the world automobile transport” will switch to electric traction, and “all industrialized countries” - to renewable energy sources, this will happen. And then Russia "will have no money left for military programs, propaganda and the" fifth column "in different countries." The next stage of the Napoleonic dreams of Mr. Belokolos is, obviously, a yellow-black flag over the Kremlin ... I will not comment on it due to sheer delirium - both the conclusions and, most importantly, the prerequisites for them. I can only say that the current OPEC + agreement can indeed become for Russia something like an economic “Brest Peace”. We’ll survive the insult. Losses will be compensated. The main thing is to withstand and wisely use the time gained as a result of his conclusion. To prevent the collapse of the ruble, the collapse of the economy, the collapse of the oil industry. Stay in the markets, defeat the pandemic. And then we'll see who lost.