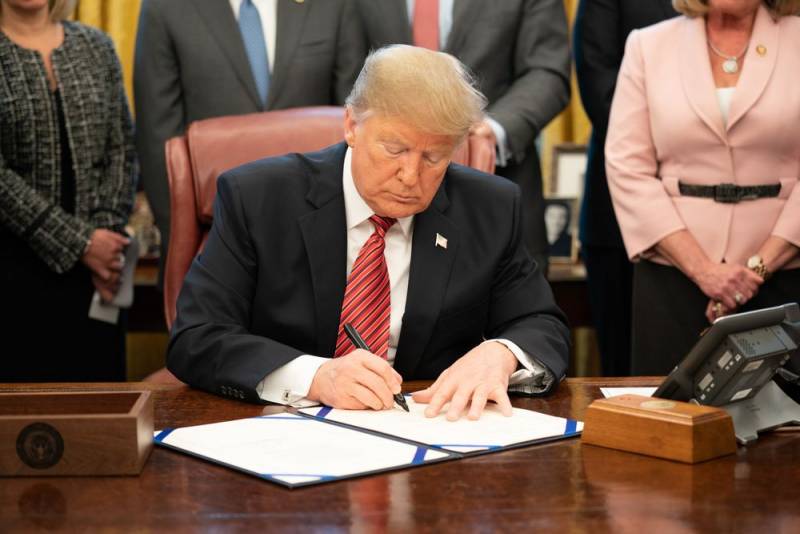 The White House reported that Washington will begin to impose sanctions on those countries that for one reason or another do not evacuate their citizens from the United States in the wake of the COVID-19 pandemic. The American newspaper The New York Times reports that US President Donald Trump has already signed a memorandum.

They will either take their people out or lose their visas
- led the publication of the word trump.

It should be noted that the document (Memorandum on Visa Sanctions) provides for the introduction of visa restrictions in relation to "irresponsible" countries. It has already been published on the official website of the White House.

The document says that restrictions can be applied to countries that refuse to pick up or unreasonably delay the removal of their citizens from the United States during this difficult epidemiological time. The U.S. Department of Homeland Security will now report violations to the Department of State. Based on this, a decision will be made on the introduction of visa restrictions within seven days.

It also provides for the lifting of sanctions against “reclaimed” countries. To do this, it is enough for the head of the US International Security Bureau to inform the head of the State Department that another state has resumed the reception of its citizens. The document will be valid until December 31, 2020, however, the possibility of its extension is also provided.

It should be added that on April 11, 2020, there were already 506 thousand infected COVID-19 in the United States. 18,8 thousand people died. 29 thousand people were cured.
Ctrl Enter
Noticed oshЫbku Highlight text and press. Ctrl + Enter
We are
US will impose new sanctions when Gazprom attempts to complete the Nord Stream-2
In Russia, cash from a VISA card can be withdrawn at the cash desk of a store
Reporterin Yandex News
Read Reporterin Google News
Ad
The publication is looking for authors in the news and analytical departments. Requirements for applicants: literacy, responsibility, efficiency, inexhaustible creative energy, experience in copywriting or journalism, the ability to quickly analyze text and check facts, write concisely and interestingly on political and economic topics. The work is paid. Contact: [email protected]
3 comments
Information
Dear reader, to leave comments on the publication, you must to register.
I have an account? Sign in