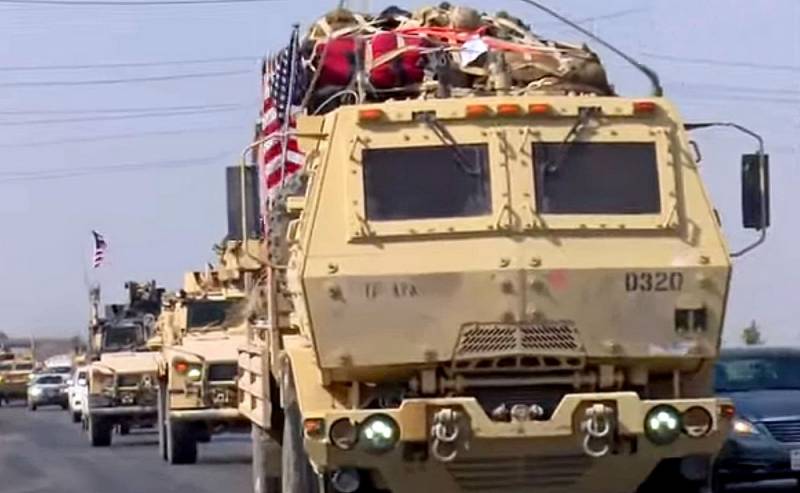 In Iraq, militants of the Shiite group Askhab al-Kaf claim that they attacked an American convoy in the province of Salah al-Din on April 9. They posted a video showing how a convoy of trucks was moving in the night. During the movement, one of the trucks explodes.


The video comes with militant cheers in Arabic. However, it is not clear from the shooting itself where the blow actually came from and what damage was caused to the US military convoy. No comments have yet been received from US military authorities.

The militant Shiite group Askhab al-Kaf, according to some reports, was formed a year ago.


US troops have been in Iraq since 2011 - since the end of the war, which began in 2003 with the goal of overthrowing the regime of Saddam Hussein. Despite the losses incurred by the occupying forces, Donald Trump has no plans to withdraw troops from Iraq.

The complexity of the situation is exacerbated by the growing contradictions between policies The United States and Iran in this region - the authorities of the latter also consider Iraq the sphere of its foreign policy and military influence. In Iraq itself, meanwhile, chaos reigns, corruption and unemployment. The relatively wealthy once country is in complete disrepair.
Ctrl Enter
Noticed oshЫbku Highlight text and press. Ctrl + Enter
We are
The State Department demanded that Baghdad find and punish those who attacked the base of Balad
The beginning has been made: Iraq is preparing for the withdrawal of American troops
Reporterin Yandex News
Read Reporterin Google News
Ad
The publication is looking for authors in the news and analytical departments. Requirements for applicants: literacy, responsibility, efficiency, inexhaustible creative energy, experience in copywriting or journalism, the ability to quickly analyze text and check facts, write concisely and interestingly on political and economic topics. The work is paid. Contact: [email protected]
3 comments
Information
Dear reader, to leave comments on the publication, you must to register.
I have an account? Sign in