Iran may be the main winner of the war in Syria 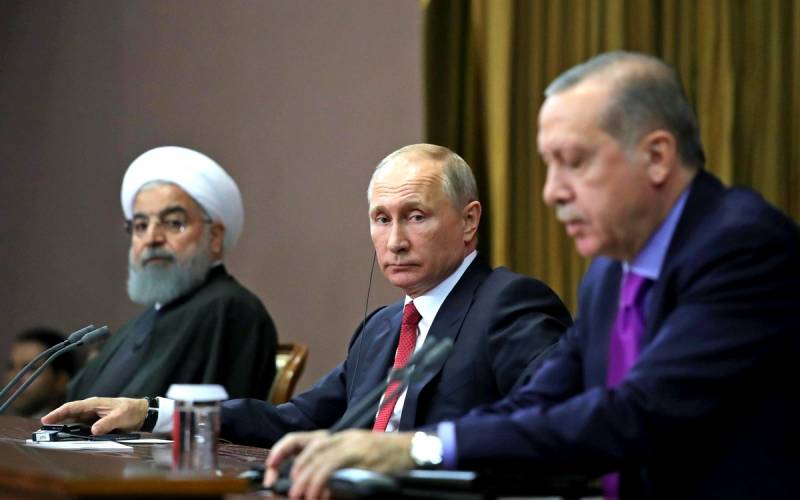 A month ago, Presidents Vladimir Putin and Recep Erdogan decided among themselves the future of Syria, re-dividing the northern province of the IAR of Idlib between Damascus and Ankara. At the same time, the third most important side of the Syrian conflict - Iran, which, we recall, came to the aid of Bashar Assad much earlier than the Kremlin, did not take part in the meeting.


Now, Tehran, apparently, intends to show who in the Middle East is the new owner, despite the sanctions and the coronavirus pandemic that swept the Islamic Republic.

As a matter of fact, the Iranian authorities have no particular choice precisely because of the aforementioned reasons. Things are bad, a retreat on all fronts will only aggravate the existing problems, therefore we must, on the contrary, advance.

For example, in Iraq, there seems to be a serious upheaval. The famed rocket attacks on US military bases in that country following the assassination of General Kassem Suleimani, the “Iraqi resistance group” behind Iran, have been called the “minor response.”

Seriously and rightly fearing retaliation from the Shiites, the United States abandoned its four bases in this country, transferring the contingent to real fortified areas in Erbil and Ain al-Assad. Now they are good targets, so the Pentagon covered them with all available MIM-104 Patriot anti-aircraft missile batteries. Apparently, these air defense systems will soon have a great opportunity to demonstrate their real combat capabilities.

The Iranians are strengthening their presence in neighboring Syria, but they are doing it more subtly and smartly. While a month ago, Russia and Turkey were balancing on the fine line separating them from the regional war over Idlib, the successor to the murdered Kassem Suleymani, Brigadier General Ismail Kaani, appeared in Aleppo and declared this important center a zone of influence of Iran. Idlib is important, but control over Aleppo and Deir ez-Zor is even more important, which is well understood by all parties to the conflict.

So how is Tehran gaining a foothold in Syria?

At first, Iran took note of the tricks that the US and Turkey have long used. In all significant Syrian cities, the Islamic Republic, as an ally of Damascus, opens spiritual and cultural centers where they familiarize the local population with Persian culture, religion and language. The American specialized publication Foreign Policy writes on this subject the following:

These centers are designed to integrate local youth into the Persian culture and Shiite religion. They teach Farsi, and well-performing students are awarded. In addition, trips from Deir ez-Zor to Iran are organized.

In the long run, such activities always give their results, forming certain views and public support.

SecondlyTehran is gradually taking control of the Syrian army. The process of transferring officers from the Iranian Islamic Revolutionary Guards Corps (IRGC) to the SAR Armed Forces is noted. If this process is accompanied by the acquisition of Syrian citizenship by the fighters, then there is a creeping expansion of Iran into the power structures of the ally.

While Moscow is fighting the “barmaley” and “butting” with Turkey over the demarcation line, the Persians came to Syria to stay. Ultimately, it is Iran that may turn out to be the main winner, and Russia will only get leased military bases in Tartus and Khmeimim.
Ctrl Enter
Noticed oshЫbku Highlight text and press. Ctrl + Enter
We are
The blow took place: options for further revenge of Iran by the Americans
Elimination of Iran's top officials: what lesson should Russia learn
Reporterin Yandex News
Read Reporterin Google News
Ad
The publication is looking for authors in the news and analytical departments. Requirements for applicants: literacy, responsibility, efficiency, inexhaustible creative energy, experience in copywriting or journalism, the ability to quickly analyze text and check facts, write concisely and interestingly on political and economic topics. The work is paid. Contact: [email protected]
8 comments
Information
Dear reader, to leave comments on the publication, you must to register.
I have an account? Sign in