“Not a single chance”: Americans compared the capabilities of the MiG-31 and F-22 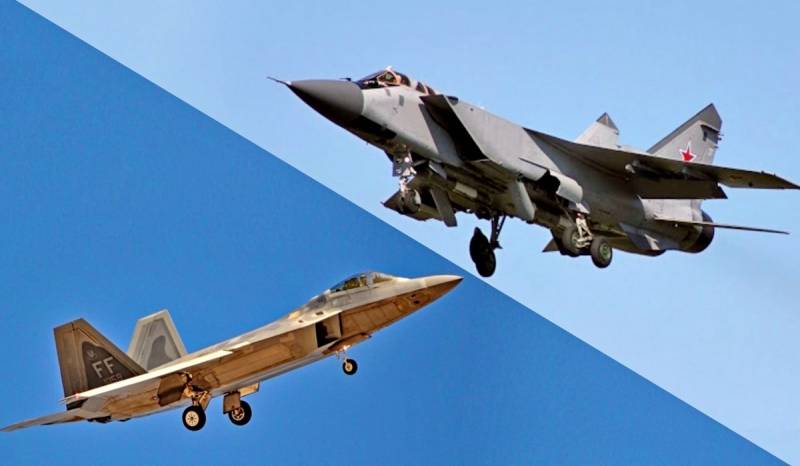 F-22 "Raptor", entered service with the US Air Force in 2005, today is considered the most modern western fighter to gain air superiority. The Reptor has been developed since the late 1970s to restore lost ground. Previously, it was supported by the F-15C Eagle fighter, but it was undermined by the Soviet Su-27 and MiG-31 fighters, writes the American Military Watch magazine. The latter is nicknamed in the West as "Fox Hound."


While the F-22 is the heaviest and most combat-capable western fighter, the MiG-31 in its latest versions of the BM and BSM is considered the most effective Russian jet aircraft for air combat.

With a weight of about 29 kg, the F-400 retains the title of the heaviest western fighter, and can accommodate one of the largest and most powerful radar AN / APG-22, whose weight is about 77 kg. However, even compared to the “Reptor”, the MiG-554 remains an extremely heavy and powerful combat aircraft. Weighing more than 31 kg, the Fox Hound can accommodate the 41-kilogram Zaslon radar, which provides a much greater detection and tracking range than its smaller counterpart on the F-000.

Comparing the combat capabilities of the MiG-31 and F-22 in the air, Deputy Chief Designer from 1971 to 1999 and Director of the Consulting Engineering Center at the Mikoyan Design Bureau Valentin Stepanov noted:

Today, Americans admit that if there is one aircraft that can be compared with the F-22, then this is the MiG-31. Firstly, it carries a more powerful radar. Secondly, it has a large payload, and its missiles have more advanced tactical and technical characteristics. In this case, the MiG-31 is significantly faster than the F-22. Its dynamic field of interception is wider. MiG-31 is actually the most versatile interceptor with the best capabilities in the world.

Although this comment ignores the objective advantages of the F-22, they give some idea of ​​the strengths of the MiG-31, writes Military Watch.

Stepanov’s statement was made long before the latest modifications of the MiG-31BSM and MiG-31BM were developed, although the capabilities of the Raptors have not changed much since then.

Comparing air-to-air missiles of both aircraft, the following can be said: The F-22 carries six AIM-120D AMRAAM missiles with a range of 180 km, as well as two short-range AIM-9X missiles in its internal weapons compartments. The payload is comparable to its predecessor, the F-15C, and doubles that of the F-35A.

Moreover, the Fox Hound is the fastest combat aircraft in the world, capable of operating at altitudes above 21 km and at speeds above Mach 2,8. This allows the interceptor to launch missiles with significantly greater kinetic energy than the F-22, which provides a longer range for its missiles.

Even if we take into account the indisputable advantage of the F-22, namely its “invisibility”, then for the MiG-31 this will not be a problem. Its huge radar will find a "needle in a haystack," and will not leave a single chance to the American fighter, concludes Military Watch.
Ctrl Enter
Noticed oshЫbku Highlight text and press. Ctrl + Enter
We are
In the United States appreciated the Russian special automatic machine ADS
Flying will be worse: TOP 5 airliners of the future
Reporterin Yandex News
Read Reporterin Google News
Ad
We are open to cooperation with authors in the news and analytical departments. A prerequisite is the ability to quickly analyze the text and check the facts, to write concisely and interestingly on political and economic topics. We offer flexible working hours and regular payments. Please send your responses with examples of work to [email protected]
31 comment
Information
Dear reader, to leave comments on the publication, you must sign in.