Russian military in Italy and Syria have similar goals 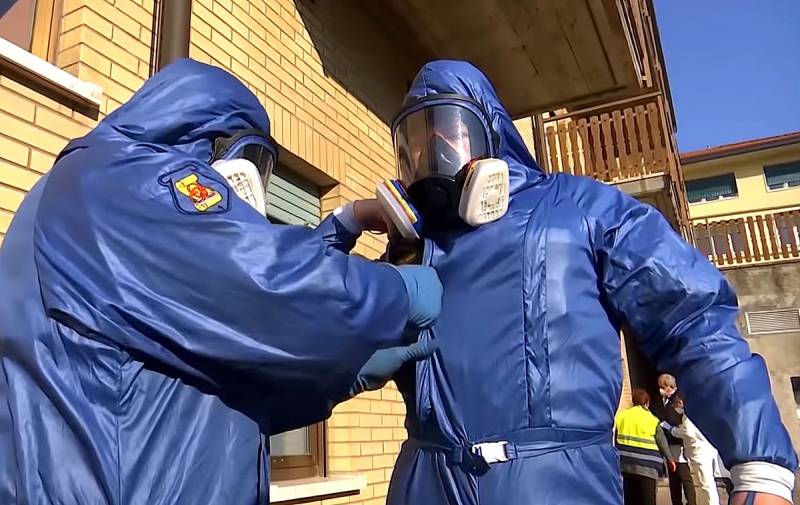 Recent complaints from the Russian blogosphere and a well-defined (liberal) segment of our media that Russia “sends military doctors and help to fight the coronavirus epidemic to Italy instead of tackling internal problems” are no longer causing just bewilderment and irritation, but outright anger.


Well, let’s say you don’t have to be an expert on the issue under discussion and at the same time get into “experts”, imposing your own “priceless” opinion on everyone around. But to pretend that you don’t understand elementary, completely obvious things and become in the position of “exposer”? Here, rather, we no longer have foolishness, but rather a concrete intention.

Even if we abandon the notorious “universal values” with which, by the way, our liberals are so scolded (exactly, by the way, until the moment when they need to do something specific personally), if you do not take into account the most ordinary mercy and compassion ... Anyway, based on a purely practical and deeply pragmatic point of view, the presence of our specialists in the field of military medicine at the epicenter of the COVID-19 pandemic that has hit Europe is invaluable for Russia, for its future, its security, its prospects TIV.

To say that the armed forces of European countries, both members of the North Atlantic Alliance and others, were completely unprepared for the worthy fulfillment of the service and combat tasks assigned to them by the disaster that erupted, it means to say nothing. Yes, they themselves can’t protect themselves, not that someone! Every day brings new reports from the "coronavirus front", the numbers of army losses in which are comparable to the not-so-small size of the armed conflict. I don’t even talk about civilian casualties. I’ll note right away that in the future I will operate with data two or three days ago (due to the lack of more recent ones), which can be corrected in the direction of a serious increase. So, as far as it is known, at least 600 military personnel are infected with coronavirus in France. Although, based on the fact that the local armed forces not only canceled all sorties of military aircraft, but also had problems with the elementary unloading of military transport “sides,” the situation may be even more serious. In Spain, where the military is truly heroically fighting a pandemic, 230 of them have officially confirmed infection, more than 3000 are isolated with suspected COVID-19. In Germany, 250 soldiers are infected. Italy did not disclose data on the diseased "lower ranks", but the list of the "fathers-commanders" who caught the virus is impressive - a dozen high-ranking military men, one of whom, alas, has already passed away. Britain and Turkey are generally silent on this subject, like partisans, but much can be understood from indirect signs regarding their armed forces.

Ankara at the level of the Ministry of Defense officially announced the cessation of all military activity in Idlib and generally in Syria. “The movement of personnel and troops is minimized, unless it is mandatory,” the statement said. As for London, according to Jack Watling, a senior fellow at the Royal United Institute for Defense Research in the United Kingdom, if the local army is to control the outbreak of the coronavirus "COVID-19 will be detected in about 20% of its personnel." So far, 5 cases of infection in Cyprus are reliably known. At the same time, the armed forces of Misty Albion turned out to be as “useful” in the current situation as the vast majority of their comrades in arms and the North Atlantic Alliance. A typical example - in their medical service there are nominally more than 10 thousand personnel. But ... Firstly, reservists are also included in this amount, which are now "inaccessible" because they are already employed in civilian hospitals. And secondly, as soon as it came to the need for specific actions, it immediately became clear that in reality there were a handful of military medics available! Or, as stated in Britain, "only a small part." The rest "cannot be available due to foreign operations, unsuccessful tests for professional suitability (!), Or ... parental leave." By the way, regarding foreign business trips - almost all European countries are now returning their military from them. The Italians and Germans are “making their feet” from Iraq, the French are considering whether they can get out of the Strait of Hormuz, as was said above about the Turks. At the same time, it’s too late for some to return. Four Italians caught a coronavirus in Kabul and several Bundeswehr military men in Lithuania. However, it would be half the trouble if the NATO fighters demonstrated only the inability to observe personal security measures in a difficult epidemiological situation. The trouble is that they were in it, in fact, useless.

It is quite natural that the vast majority of “civilian” citizens of any state perceive their own army as the embodiment of a certain force capable of saving and protecting, the embodiment of order, organization and reliability. Moreover - as the last hope, able to solve those problems that may not be up to the "civilian" state bodies and structures. What is the European military doing today? What is their decisive role in the process of confronting the epidemic? In the UK, troops carry oxygen tanks and deliver medical equipment. They also help deliver cookies to senior citizens. They also think about using the military “as security guards instead of the police, in order to unload it for other duties.” The Bundeswehr sent 15 troops "to help local authorities cope with the crisis." How specifically - deeply incomprehensible. Thousands of Polish army personnel are involved in patrolling the streets during quarantine, disinfecting hospitals and helping border guards strengthen control. In Italy, the army helps bury the dead ... It's somehow not very impressive, is it? But the defense ministers of all 27 countries that are members of the European Union have already come up with the “ingenious” idea - to create at the level of the EU diplomatic service a kind of “coordination group with the military staff”. What will this new bureaucratic structure with incomprehensible functions and powers do in general? According to EU High Representative Josep Borrell, “exchange information and best practices.” What kind of experience ?! In a word, they will “think a lot”. Speak even more and produce regular pieces of paper. Just what is now vital.

However, the most intelligent and thoughtful have already been found in all of the same Germany. There, on the basis of the Bundeswehr Command and Staff Academy and the Helmut Schmidt University of the Bundeswehr in Hamburg, a special analytical center GIDS was created, which has already managed to “give birth” to a rather big analytical report about everything that happens not only in Germany but also throughout Europe. It was made up by people who were clearly not stupid and honest, because they found the strength to admit: “the crisis caused by the pandemic exposes the shortage of basic resources at all levels,” despite the fact that by law these resources should be available. Center analysts also point out "a lack of strategic resources in the field of personnel, materials and infrastructure at the federal level." At the same time, the GIDS did not fail to screw in the report that "the Bundeswehr has been faced with the problem of a lack of personnel since the military conscription service was canceled in Germany." That is, in fact, they signed for their own incapacity ... Why do I list all these failures, setbacks and bitter, albeit very belated "insights" and recognition of the European military? Believe me, it was not out of a feeling of gloating at all - and there were no thoughts. Just against the backdrop of all the mess that is happening in the Old World, the role in the brilliant overcoming of the outbreak of COVID-19 in China by its People's Liberation Army is much brighter and more clearly visible. I must say, comrades from the Middle Kingdom are not eager to cover just this aspect of their own epic to combat coronavirus. Here, each word has to be literally pulled by ticks, let alone specific numbers and names. Nevertheless, some information is still made public, and, you know, it’s very, very impressive.

The first three military transport IL-76 PLA, carrying on board not only the most important cargoes to fight the disease, but also the "landing" of the country's 450 best military doctors, flew to Wuhan on New Year's Eve. On February 2, there were already 8 aircraft with medical supplies and almost twice as many specialists ready to go to the front lines of the battle with a deadly disease. On February 13 and 17 such aircraft arrived in Wuhan, covered by an outbreak of coronavirus 12. Thus, in a fairly short time, more than 1200 military doctors and more than 100 tons of necessary medical supplies were transferred to the epicenter of events. In total, more than 4 PLA ​​military doctors took part in confronting the epidemic. At the same time, the command emphasized more than once - these were the best of the best, carefully selected and almost a competition. Mostly volunteers. Moreover, 20 thousand militias were sent daily from the provincial garrisons to Wuhan “to control foreign personnel, carry out disinfection, transport necessary materials and other preventive measures”. 20 thousand a day! How do you like the scale? And the point here is not Chinese crowded. And not only in the incredibly clear leadership and coordination that the CCP Central Military Committee carried out with an iron hand.

The PLA fighters knew very well what and how they needed to do! They were ready! The most severe lesson they learned during the outbreak of SARS was learned (not only by the army, but also by the whole country) not even 100, but all 300%. Moreover, from a certain moment, the Chinese military, doctors, epidemiologists, emergency response specialists have invariably been appearing all over the world where some kind of disaster has happened. They took part in the fight against Ebola, the elimination of the consequences of many natural disasters and catastrophes - they helped, saved, treated ... And gained experience! The same invaluable practical, combat experience that can not be obtained either during exercises or during the most realistic trainings. Nowhere and never, except in the hell of a real disaster, where all the present is tears, and blood, and pain, and danger. The fact that today our army has taken the same path is the only possible right decision. Honor and glory to every military doctor of Russia, who is in suffering Italy today! And respect to those leaders who decided to send them there. Maybe someone thinks that the current pandemic is random? Or the last one? I envy the uncomplicated simplicity of consciousness of such subjects ...

Many, including in the West, continue to wonder - what are the goals of the Russians, helping the Italians? It must be understood that Russian doctors today save not only the lives of Europeans, without any expectation of gratitude or benefit. They risk themselves so that the Italian nightmare does not recur in their homeland. As well as the Russian military in Syria, they fought the terrorists not only to save the lives of the Syrians, but also so that those thug militants would not come to Russian soil sooner or later.

And this is a completely obvious fact.
Ctrl Enter
Noticed oshЫbku Highlight text and press. Ctrl + Enter
We are
Ukraine from the inside: traitors, curators and those who watch from the Kremlin
Ten "defeats" of Putin
Reporterin Yandex News
Read Reporterin Google News
6 comments
Information
Dear reader, to leave comments on the publication, you must sign in.