MQ-25A tanker drone will be able to deliver 6,8 tons of fuel to fighters 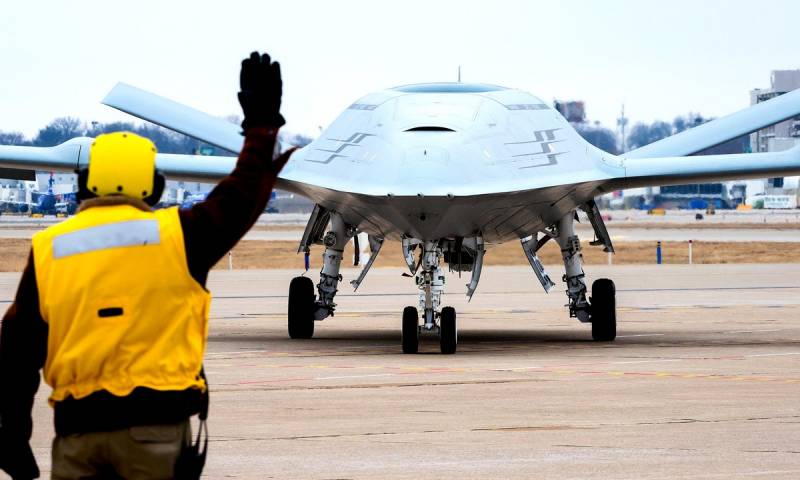 The Pentagon reports that on April 2, the US Navy Aviation Systems Command entered into a new contract with Boeing, which is in addition to the existing agreement. The contract worth 84 thousand dollars provides for part of the work on the project for the production of unmanned aerial vehicles MQ-681A Stingray.


For fiscal year 2020, $ 25 million was allocated for development work on the MQ-63,5A, which could “burn out” at the end of the period. The new contract provides for some new work to accelerate the project as a whole. Two dozen Boeing branches from different states and cities will be involved in the work under the agreement. Technical details of the order are not given.

The implementation of the current contracts for the UAV MQ-25A should be completed by August 2024. They provide for the supply of three vehicles with the functions of air tankers. By the indicated date should be tested and bring the UAV to operation.

USNI News recalls the progress of the project, its goals and objectives. Over the past ten years, the U.S. Navy continues to work on creating a new unmanned tanker for use in carrier-based aircraft. In 2018, Boeing won the competition for the development of such a UAV. Her project MQ-25A outperformed competitors from Lockheed Martin and General Atomics. The winner of the program received a contract for the construction of four prototypes with a total value of $ 805 million with payment over several years.

In 2024, the first MQ-25A should reach the stage of initial operational readiness as part of one of the deck squadrons. The appearance of such equipment will improve the condition of the fleet fleet and return to it the necessary capabilities.


According to USNI News, the launch of the current program is determined by the specifics of the activities of carrier-based aviation. When solving a number of tasks, F / A-18E / F Super Hornet fighter-bomber aircraft need refueling in the air. Fighters also perform the functions of refuelers - up to 20-30 percent stand out for this. from the current number of aircraft.

The appearance in service of the UAV MQ-25A, capable of delivering 6,8 tons of fuel at a range of 500 nautical miles, will release fighters for solving combat missions.

In September last year, the Boeing Corporation conducted the first flight of an experienced drone MQ-25A under the designation T-1. The machine continues to fly and shows its characteristics. In addition, the customer was shown that the program has not reached an impasse, and work continues. This year it is planned to conduct the first tests of the T-1 on an aircraft carrier.

According to Boeing's plans, in 2021 new UAVs will be built that are fully consistent with the final version of the project. The first flight from a land airport is planned for 2022, and tests on the deck will start in 2023. Later, in 2024, three or four MQ-25As will be able to begin service in one of the squadrons.

USNI News notes that Boeing was able to complete part of the design work and build a prototype T-1 a few months before the announcement of the competition and the receipt of the contract. All this allowed us to quickly move to a new stage of testing and development work. The program is in accordance with the approved schedule, and the new contract brings the adoption of new equipment into service.
Ctrl Enter
Noticed oshЫbku Highlight text and press. Ctrl + Enter
We are
Norwegian army intends to use ultra-small UAVs FLIR Black Hornet
Flying canister: USA showed the latest drone tanker
Reporterin Yandex News
Read Reporterin Google News
Ad
The publication is looking for authors in the news and analytical departments. Requirements for applicants: literacy, responsibility, efficiency, inexhaustible creative energy, experience in copywriting or journalism, the ability to quickly analyze text and check facts, write concisely and interestingly on political and economic topics. The work is paid. Contact: [email protected]
20 comments
Information
Dear reader, to leave comments on the publication, you must to register.
I have an account? Sign in