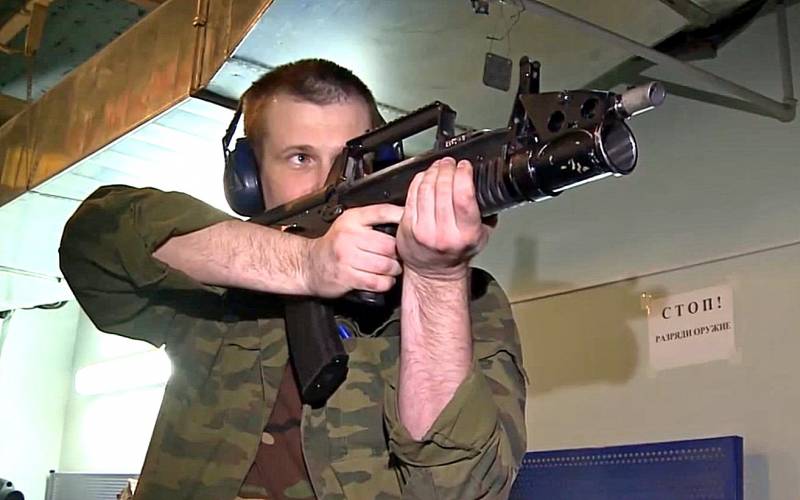 
Water and weapons are not friendly. Modern firearms can be exposed to water or submerged and remain operational. But samples intended for use in the air usually do not work well under water.

The Russian ADS assault rifle is designed to solve these problems. It is designed for special operations and is intended for use by combat swimmers of the Russian special forces. The machine was created in 2007 and first introduced in 2013. It was intended to replace the outdated APS ("Special Underwater Assault Rifle"), adopted by the USSR in the 1970s. APS fired a special needle-shaped bullet of caliber 5,66 mm, length 120 mm.

The modern ADF is built on a bullpup layout — the store is located behind the fire control handle. Due to this, the machine has a length of slightly less than 27 inches (660 mm) with a full-sized 16-inch barrel (415 mm) - like the AK-74. The ADF has automation based on the removal of powder gases, shoots from a closed shutter and has the ability to select a fire mode.

The ADF is equipped with a Picatinny rail. It has its own open sight and can be equipped with other sights or night vision devices.

On the barrel can be installed silent shooting device. A 40 mm grenade launcher is integrated into the design of the machine. It uses VOG-25 family shots and can fire at a range of up to 450 yards (400 m).

A truly innovative ADS assault rifle is thanks to the choice of ammunition. The machine is compatible with the standard AK-74 magazine and can use standard 5,45x39 mm cartridges for air combat.

For use under water, the ADF uses a special cartridge PSP. It includes the original elongated bullet with a flat nose. When moving in water, such a bullet creates a cavitation cavity around itself, which sharply reduces the resistance of the medium. The PSP cartridge has dimensions of 5,45x39 mm and is used with a standard Russian machine gun store. To switch from one cartridge to another you just need to replace the magazine.

On land using an automatic cartridge, the initial bullet speed is 1000 yards per second (900 m / s), firing range - 550 yards (500 m). According to these characteristics, the ADF is similar to other machines. Underwater, an ordinary bullet flies only 10 feet - so special bullets are required.

When using the SSP, the underwater firing range reaches 65 feet (20 m) at a depth of 10-12 feet. Increasing depth reduces the firing distance. It is unclear what characteristics the PSP cartridge shows in air. Probably, according to the main indicators, it is seriously inferior to the regular 5,45x39 mm.

According to the general characteristics, ammunition of the PSP when firing under water is inferior to the needle-shaped ammunition of the APS assault rifle. However, the advantage of the ADF machine is different. Together with the APS, the combat swimmer had to take another machine to work on land. A modern ADS machine performs the functions of both. That is why, as reported, the two-medium automatic dispenser is already in service with some special forces of the Russian Navy.

Ctrl Enter
Noticed oshЫbku Highlight text and press. Ctrl + Enter
We are
Russian cosmonauts want to return weapons
Amazon Go offline store: man turned out to be a "weak link"
Reporterin Yandex News
Read Reporterin Google News
Ad
The publication is looking for authors in the news and analytical departments. Requirements for applicants: literacy, responsibility, efficiency, inexhaustible creative energy, experience in copywriting or journalism, the ability to quickly analyze text and check facts, write concisely and interestingly on political and economic topics. The work is paid. Contact: [email protected]
Information
Dear reader, to leave comments on the publication, you must to register.
I have an account? Sign in