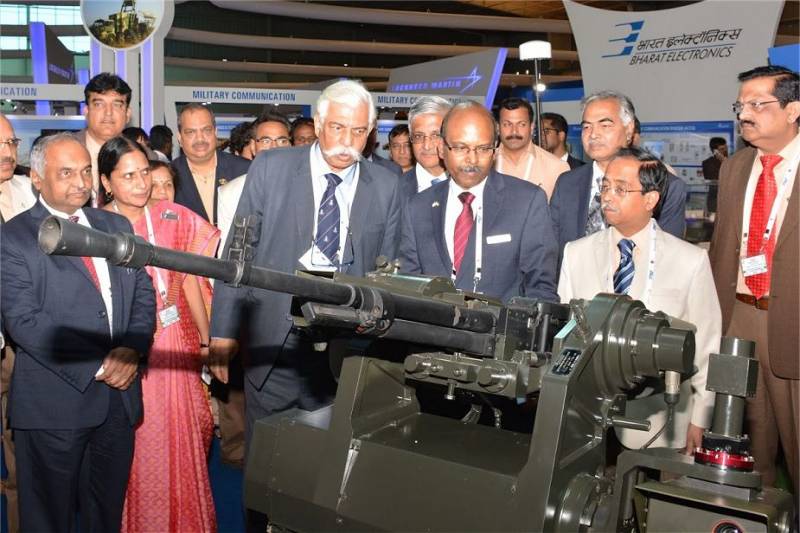 According to Army Recognition, the Indian military industry is going to seek customers for its new remotely controlled combat module. Universal system compatible with different technique and can carry different weapons. It is offered to the Indian army and brought to the international market.


The new DUBM is a joint development of Ordnance Factory Board (OFB) and Bharat Electronics Ltd (BEL). It has the simplest name RCWS (Remote Control Weapon Station) and was first presented in February at DefExpo 2020. The exhibition was equipped with a large-caliber NSVT machine gun made in India.

OFB and BEL have not yet specified the tactical and technical characteristics of the combat module, although they mention its main features, capabilities and mission. It is noted that the project corresponds to the concept of Make In India.

OFB reports that RCWS is designed to combat ground or air targets. Remote control allows the operator to fire without exposing himself to risks. DBM is suitable for use day and night; a laser rangefinder is provided. At the request of the customer, the fire control system can be supplemented by an automatic target tracking system.

DBM was developed for the promising main battle tank Arjun Mk I, as well as for a unified repair and recovery vehicle. The issue of installation on patrol boats has been worked out. The possibility of using RCWS on any other land and sea carriers is declared. Already tested the module on the tank and boat.

At the exhibition, the module was demonstrated only with a heavy machine gun. The developers claim that it can be supplemented with a normal caliber machine gun, automatic grenade launcher or guided missiles - at the request of the customer.

Indian RCWS has a traditional design for such systems. It is built on the basis of a rotary platform and has a swinging part for weapons, an optoelectronic unit is hung on the left. Additional weapons are mounted on mounts to the right of the main machine gun.

The new DBM has been tested on different platforms. The Indian army has not yet revealed its real prospects. Army Recognition assumes that such equipment will receive new or modernized tanks of the Arjun family. In the coming years, the Indian army will receive armored vehicles of a new modification, and they can get DBM. In the meantime, remotely controlled weapons are only on T-90S tanks.

RCWS module can bring to the international arms market. Indian enterprises do not have much experience in the production of such systems and will become new to the market. However, Army Recognition believes that they can find customers. It seems that the new DBMS has a good value for money. It offers almost all modern features at a reasonable price.

In service with India, there are still no modern remotely controlled combat modules. Since 2016, negotiations have been ongoing with Israel on the supply of 747 Elbit Systems' DBMs to the M2HB machine gun. 136 products were going to be bought in finished form, the remaining 611 were to be manufactured at Indian enterprises. In 2018, Elbit announced the receipt of an order worth $ 173 million. These modules are for the Indian Navy and Coast Guard.

The supply of Israeli technology has not yet been reported. Thanks to this, the joint development of OFB and BEL has every chance of becoming the first modern DBM in service with the Indian army, and at the same time the first export model of this class.
Ctrl Enter
Noticed oshЫbku Highlight text and press. Ctrl + Enter
We are
Battle for space: can Russia create its analogue to the ISS
What will Russia do when the ISS does not
Reporterin Yandex News
Read Reporterin Google News
Ad
The publication is looking for authors in the news and analytical departments. Requirements for applicants: literacy, responsibility, efficiency, inexhaustible creative energy, experience in copywriting or journalism, the ability to quickly analyze text and check facts, write concisely and interestingly on political and economic topics. The work is paid. Contact: [email protected]
2 comments
Information
Dear reader, to leave comments on the publication, you must to register.
I have an account? Sign in