Russian patrol in Syria stuck in the mud, trying to go around the Americans 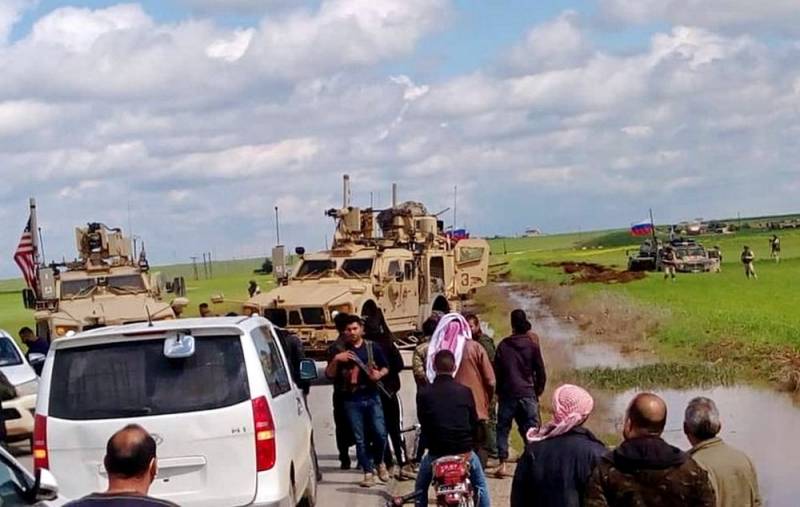 Social media users continue to discuss the “adventures” of Russian and American military patrols in Syria. Another video appeared on the web as a Russian military police patrol got stuck in Syrian mud while trying to go round the Americans.


It is specified that the armored car "Tiger" and BTR-82A overestimated their strength. To pull them out, I had to call Typhoon-K for help. At the same time, the American patrol blocked the road and does not pass the Russian convoy further.

Judging by the situation on the video, the action takes place in northeast Syria, where the Kurdish population predominates. We remind you that in February 2020, in the Syrian province of Hasaka, an American armored car already tried to push the Russian Tiger off the road.


Then the Americans didn’t like that the Russians tried drive around them on the side of the road. At the same time, the Americans themselves specifically prevented the Russians from driving along the road, carrying out dangerous maneuvering with a trip to the oncoming lane.

Therefore, you need to wait for an official clarification from the Russian Ministry of Defense, so that it becomes clear what happened on the Syrian road between the Americans and the Russians this time. Moreover, no one invited Americans to Syria.

At the same time, local sources inform that the actions on the video take place on March 30, 2020. Allegedly, the Russian patrol, heading towards Rumailan, was stopped by the Americans, after which it was forced to turn around.
Ctrl Enter
Noticed oshЫbku Highlight text and press. Ctrl + Enter
We are
Published video of the pursuit of Americans by the Russian military in Syria
The American armored car tried to push the Russian "Tiger" off the road in Syria
Reporterin Yandex News
Read Reporterin Google News
Ad
The publication is looking for authors in the news and analytical departments. Requirements for applicants: literacy, responsibility, efficiency, inexhaustible creative energy, experience in copywriting or journalism, the ability to quickly analyze text and check facts, write concisely and interestingly on political and economic topics. The work is paid. Contact: [email protected]
15 comments
Information
Dear reader, to leave comments on the publication, you must to register.
I have an account? Sign in