A conversation between Putin and Trump: Russia prevails in the "oil war" 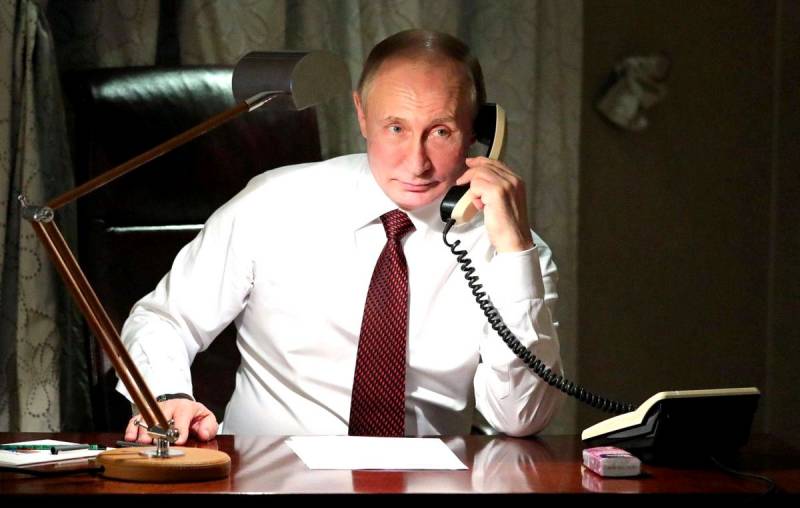 The telephone conversation between the presidents of Russia and the United States, which took place the day before and devoted, as official reports about it, first of all, “the stabilization of the situation on the world energy markets”, may well be the first real step towards ending the oil war, which is detrimental to the economies of both countries ", Which, roughly speaking, needed to be completed yesterday.


Nevertheless, in this confrontation, as in any other, there can be no winners and losers. Well, let's try to figure out which of the parties at the moment can be considered prevailing and why.

First of all, let’s determine the exact list of participants in the conflict, because of which, according to most analysts, “black gold” today has turned into “black trash”, in any case, based on prices for it displayed on world exchanges. Reduce the whole matter to a clash of OPEC positions (in the first place - completely determining policies this organization of Saudi Arabia) and Russia, as some experts in the West try to do today, it would be completely wrong. The easiest way, like the "wise men" who have a simple and incorrect answer for any situation, is to blame the "intransigence of Moscow", which has refused once again to reduce oil production in favor of Riyadh. The root cause of the cataclysms that covered the global energy market lies not in our country and in the Middle East at all. This is exactly Donald Trump, in his desire to “make America great again”, he literally “flooded” the markets with completely unbalanced volumes of “black gold”, completely not thinking about the possible consequences of such a rapid expansion. Yes, let’s be objective - he didn’t release the “genie” of shale oil production from the bottle, but it was the current head of the White House who created the most favored treatment for the “shale”. In particular, removing and lifting all restrictions on mining introduced by his predecessors: “Drill wherever you want!” Again, the course towards an extremely aggressive policy of crowding out competitors, whose instruments were frankly non-economic methods, such as imposing sanctions and other methods of political and even military blackmail (as it was, say, with Iran), created the illusion that American oil traders they can not be considered with anyone.

Why not increase production “how much will fit”, considering all world oil consumers exclusively as their own potential buyers? That is what they did. It should be remembered that energy price fluctuations began long before the coronavirus epidemic - and precisely because of the completely boorish and irresponsible expansionist economic US policy. Numerous attempts by OPEC to correct oil flows from across the ocean, reducing its own production, only led to the impudent “shale” to capture more and more new markets. Russia, which for some time supported this game, at a certain stage was convinced that it brings no benefit to anyone except the United States. There, during the period from 2011 to 2019, the volume of pumping of “black gold” from its own subsoil doubled. Moreover, the acquisition of the status of a net oil exporter by the United States was not even due to the success of the “shale” there, as it was literally deleted from the list of exporters of Venezuela and Iran by introducing “draconian” sanctions against these countries. Moscow understood very well who was next. And so it turned out - the introduction of restrictions against Rosneft subsidiaries was the "first act" of an operation to squeeze out our suppliers of "black gold" from world markets. In this situation, consent to OPEC terms would mean not just surrender of positions, but surrender. Against this background, Donald Trump’s words he recently said in an interview with Fox News that “Russia and Saudi Arabia both went crazy in their price war” just sound wonderful. One would like to ask: and you, Mr. President, are you all right with mental health ?! Well, with what a fright did you decide that Moscow and Riyadh would meekly leave the markets, leaving them in full and undivided use for you? Smacks of megalomania, at least.

We all lost something in this crazy war ...

Perhaps the most important thing: the negotiations on the "cessation of hostilities" and the "rescue of an ordinary barrel" were initiated by Washington, and not Moscow. Someone may wonder: why did the United States now ask for peace, because the first attempt to “push” their overly active shale production, undertaken by Saudi Arabia in 2014, was not the least successful? The answer lies on the surface: the coronavirus pandemic. At that time, the willingness of investors to continue to provide them with huge loans and to inject new capital into production helped the shale oil producers to survive. In order for shale oil to be profitable, the price of its barrel should still remain between 40 and 60 dollars. But only in today's USA, which are seeking an epidemic of the coronavirus, the death of which one hundred or even two hundred thousand people, according to the same Trump, will be a “good result”, investors who want to invest the last money in a deliberately unprofitable business are unlikely to be found. If it were not for a catastrophe that had fallen on the world, in fact, of universal proportions, the “battles” on the oil “front” would have gone on for as long as unknown, escalating from clashes of local significance into epic battles. Opponents would starve each other, testing their own and other economies on the fortress, while the United States would also periodically throw on the table "aces" and "jokers" in the form of regular sanctions, stored in a cheater's sleeve. COVID-19, which for three months has put the world upside down, simply does not leave time for a long “positional” war. In its normal state, planet Earth consumes an average of 100 million barrels of oil per day. Today, market analysts are inclined to believe that in the near future (calculated, maximum, weeks), this number will be reduced by 26 million barrels, or 25%.

The reason is very clear: social measures aimed at combating the pandemic (restricting movements, stopping production and others) negatively affect 92% of global GDP. Already mined "black gold" simply has nowhere to store - reservoirs located on land (access to which, incidentally, is far from all manufacturers), are filled almost "under a traffic jam". Today, surplus is poured into tankers, including those that have not been used for their intended purpose for a long time. Further, there will simply be nowhere to put it. Due to a sharp decline in demand in Newfoundland Canada, the first refinery in North America has already closed. At best - for a couple of months, at worst - for six months. The price of Canadian Western Canadian Select (WCS) oil fell to $ 3.8 per barrel. In January, it was sold for $ 37 ... Over the week of March 16-22, according to the US government, the volume of oil products in the country fell by two million barrels per day. However, perhaps you think that things are going awry only with the Americans or with us? The plans of the Saudi "oil jihad" also collapse completely. According to reports, the consumption of raw materials from Saudi Arabia was sharply reduced by the Royal Dutch Shell and the USA oil refineries, the Finnish Neste completely abandoned the April purchases of its oil that had been planned earlier, the Polish and Indian refineries beat it off, as they say, with their hands and feet. Moreover, according to the information of the transport and logistics company Gulf Agency Company Ltd, India, within the framework of strict quarantine measures, “closed” at least 52 of its ports, which as a result were forced to cancel orders for the purchase of Saudi oil due to force majeure .

The most interesting thing is that, against the background of such, frankly, not optimistic News, Riyadh has already announced its intention to increase oil export in May even more - up to 10,6 million barrels per day, due to the transfer from the domestic market to the external up to 600 thousand barrels daily! They are there at home, you see, they declare quarantine, and they intend to “throw” all unclaimed oil in the country into the markets. Moreover, the “oil lawlessness” that has unfolded around the world is pushing, to put it mildly, not too deliberate actions of all new participants. So, the Norwegian company Equinor announced its intention, again in early May, to go to the Johan Sverdrup field in the North Sea at a production level of 470 thousand barrels per day. Here are just these Vikings, declaring that their oil will be cost-effective and at a price of $ 20 per barrel, we only did not have enough in a heap! No, we definitely need to do something about this, and urgently. According to official information, Vladimir Putin and Donald Trump, in the course of a long and very thorough discussion, “reached an agreement” on the need to quickly restore order in the energy markets. Also, according to the White House spokesman, Judd Deere, who commented on the results of the conversation, the presidents came to the need to "closely cooperate" within the G20 organization in order to more effectively combat the coronavirus pandemic and "revitalize the global economy." But this, we will be frank, is already secondary.

What is the victory of Russia here, you ask? Well, at least in the fact that Washington took the first step towards. It was on the initiative of the White House that the conversation between the two leaders took place. In the current situation, the United States is under a double blow - both the oil collapse and COVID-19. So far, Russia is only experiencing the consequences of falling energy prices, and there is every reason to hope that the disease will not inflict such a devastating blow as the United States. For once, we found ourselves in a more stable and stronger position than our geopolitical opponents and, sorry for cynicism, it’s a sin not to take advantage of this. A very positive point is that for the first time in a very, very long time, Washington has addressed Moscow not with claims, threats or demands, but as an equal side, with which it intends to look for ways out of the crisis. Incidentally, this is a very good lesson for Riyadh, who, it seems, had been hoping in vain that it would be him who would support Washington. It is possible (and even very likely) that the consensus reached is only a short, purely situational truce, which will subsequently be violated by the United States in the same way as it has been done more than once. Well, well - we would have to stabilize oil prices and survive the pandemic. And then we'll see ...
Ctrl Enter
Noticed oshЫbku Highlight text and press. Ctrl + Enter
We are
How can Russia not lose the US world war for oil
The “oil war” with Russia: the “shale revolution” in the United States came to an end
Reporterin Yandex News
Read Reporterin Google News
Ad
The publication is looking for authors in the news and analytical departments. Requirements for applicants: literacy, responsibility, efficiency, inexhaustible creative energy, experience in copywriting or journalism, the ability to quickly analyze text and check facts, write concisely and interestingly on political and economic topics. The work is paid. Contact: [email protected]
47 comments
Information
Dear reader, to leave comments on the publication, you must to register.
I have an account? Sign in