M109A7 intend to make the basis of US artillery 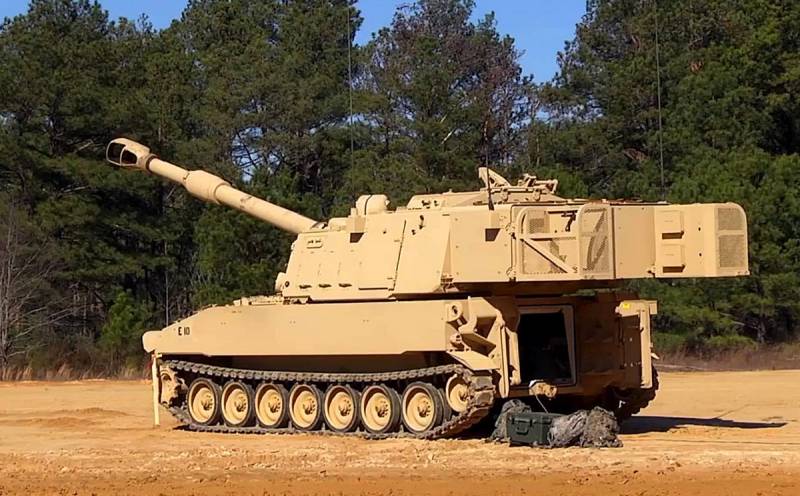 On March 24, the US Army and the international company BAE Systems signed another contract for the supply of artillery systems as part of the M109A7 Self-Propelled Howitzer combat vehicles and the M992A3 Carrier, Ammunition, Tracked ammunition transporters. For 48 sets, the contractor will receive $ 339 million.


According to a press release, the new self-propelled guns are a necessary update to the land artillery, providing an increase in the combat qualities of the Armored Brigade Combat Team units. Self-propelled units will be more mobile, more efficient and more convenient to use.

All these effects are achieved using the most advanced solutions, of technologies and aggregates. All key components of the complex went through modernization. The chassis of the combat vehicle is equipped with a new engine and transmission, as well as supplemented by an auxiliary power unit. Weapons have been improved and the electronic complex, including the fire control system (LMS), has been completely redesigned.

M109A7 carries a digital communication system with the function of receiving target designation and transmitting data to the LMS. After arriving at the firing position, the MSA independently determines the location of the self-propelled guns, processes information about the target and provides data for firing. In parallel, other procedures are performed. The first shot is performed one minute after stopping.

The LMS controls the operation of the 155 mm M284 / M284A2 howitzer. The joint work of electronics and guns provides accurate shooting at a range of up to 30 km in all conditions.

M109A7 differs from its predecessors by additional reservation and a remotely controlled installation with a machine gun. Saved automatic fire extinguishing system. All these measures increase the likelihood of survival in a collision with an enemy. The probability of being hit by a retaliatory strike is reduced, due to the ability to quickly leave the position after firing.

Attention is paid to operational issues. All major self-propelled gun systems are equipped with sensors and connected to the on-board diagnostic system. This simplifies the search for and elimination of breakdowns - allowing you to quickly return the car to service and combat work. Future technology upgrades are also being simplified.

The ammunition conveyor M992A3 is made on the self-propelled gun chassis M109A7 and unified with it for the main units. Instead of a tower and guns, he carries a cabin with stacks for shells and missile charges - a total of 95 shots. Ammunition is reloaded from the conveyor to a self-propelled gun using a mechanized system with a conveyor. In terms of mobility and level of protection, the conveyor corresponds to a combat vehicle.

The new contract stipulates the production of the first serial batch of artillery systems M109A7 / M992A3 in the amount of 48 units. In total, the US Army plans to acquire more than 200 complexes. Their total cost is over $ 1,5 billion. Using this technique, the ground forces will be able to supplement and partially replace self-propelled guns of older versions.

According to open data, in the US Army at the moment there are about 1000 self-propelled guns of the Paladin family. All available cars in the recent past have been upgraded to the state of M109A6. They are accompanied by a significant number of transporters M992A2. Deliveries of modernized equipment will make it possible to replace equipment with a developed resource, but they will make up only 20% of the total fleet.

The Army and BAE Systems reckon that the upgraded modern M109A7, with new capabilities, will become the "digital backbone" of the self-propelled artillery of the ground forces. In a few years, it will become clear how realistic such estimates were.
Ctrl Enter
Noticed oshЫbku Highlight text and press. Ctrl + Enter
We are
The American two-body carrier got a second chance
Lenovo is working on the world's first flexible laptop
Reporterin Yandex News
Read Reporterin Google News
Ad
We are open to cooperation with authors in the news and analytical departments. A prerequisite is the ability to quickly analyze the text and check the facts, to write concisely and interestingly on political and economic topics. We offer flexible working hours and regular payments. Please send your responses with examples of work to [email protected]
3 comments
Information
Dear reader, to leave comments on the publication, you must sign in.