Russia got a chance to change the world order 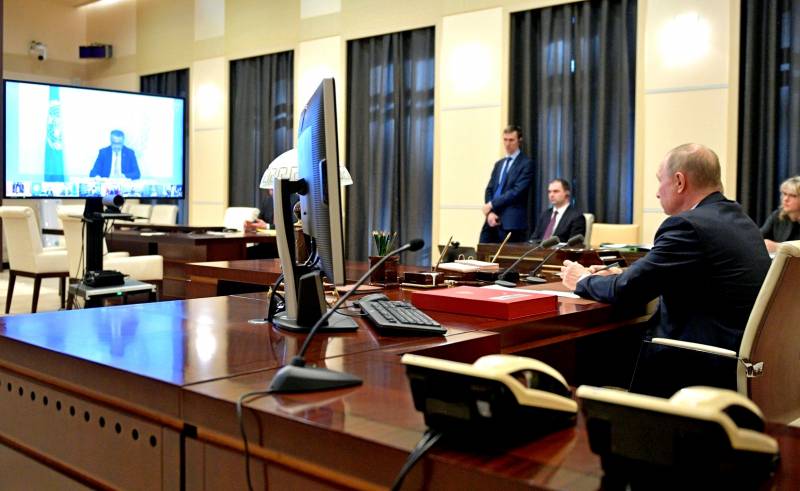 The words of Russian President Vladimir Putin, made during the GXNUMX summit, the first time in the history of this organization held in the form of a videoconference, were, in fact, the first call of one of the world leaders for the transition of mankind to a new, “post-coronavirus” reality.


Today, of course, this appeal was not supported. However, millions of people around the world have heard it. Sooner or later, the pandemic will end. And the worst that our world can then do is try to restore the wretched and sickly order in which he lived the last decades. That system, which, in fact, brought him to the edge of the abyss, the last impetus of which was the appearance of COVID-19. The time for change has come, and it's better to start it right now.

People come to your senses!

As a matter of fact, the initiatives with which Vladimir Vladimirovich spoke to the leaders of the G20 are more than moderate and unequivocally justified. The head of our state declared the need to remove as quickly as possible the network of sanctions, restrictions, "trade wars" and other strife, which the planet today was literally entangled in to please the ambitions of one, quite specific and well-known state. At a minimum, such decisions now need to be made for the countries most affected by the pandemic. By the way, the initiator of 99% of all bans on the planet - the United States - can be considered as such. Just yesterday, they surpassed China in the number of people infected with coronavirus, coming out on top in the world. But there, it seems, everything is just beginning ... Nevertheless, Russia, striving to settle scores, free from such low feelings as malevolence, calls on those who are at the head of the most developed countries to reject selfishness and unite in the face of an unprecedented threats. By the way, this is not the first such appeal - a little earlier our country, together with China, Iran, Venezuela, North Korea, Cuba and Nicaragua, has already addressed UN Secretary General Antonio Guteris with an appeal for "global solidarity", which should be expressed, first of all , in the removal of sanctions restrictions, which look like blasphemy these days, aimed at information "political accounts "and interfering with the fight against the pandemic. But what about those who just yesterday so confidently tried on the title of "supreme arbiters" of all mankind and for many years incessantly rattled about some "common" values ​​for him, turning these words into worn out speculative clichés? Naturally, there was no response from the Organization of Nations Disunited Long ago. There was no clear response to Vladimir Putin's calls from the G20 heads of state.

Instead, there is talk of money and only about it. Western countries intend to save their own economicsbut not nations. In this case, of course, it is, above all, about saving banks, large corporations from collapse, preventing stock indices and the like from falling. A person in the system of basic values ​​of the present civilized world is completely absent, taken into account solely as a consumer and producer of certain material goods. A shocking example - in Spain, the military from the units abandoned for disinfection work throughout the country were horrified to find hundreds of guests in local nursing homes, left without any supervision, abandoned to die from illness and hunger! And already dead from them ... The staff either completely fell ill with COVID-19, or, most likely, simply ran away. Relatives of the elderly left there did not care about them. The exact numbers in the chilling details of the epidemic are not cited, but at least dozens of abandoned and deceased patients are involved. Given that all in Spain there are about 5 and a half thousand such establishments of this kind, with a total number of guests of more than 370 thousand people, the scale of the tragedy can be simply apocalyptic. Here it is - the finale of the road, at the origins of which stood the creators of the "brave new world", which they are trying to impose on all of us as a standard! This is a society in which new “values” have triumphed. The highest among them is declared well-being, and the salvation of one's own skin at any cost, including at the expense of the lives of other people, is represented not by vileness, but by valor ...

Horrific however news from Spain - rather, an exception in the general information flow, which is forcedly spewed out (you cannot pick up another word) today, by the Western media, trying, as usual, to "shift from one sore head to the healthy." What are they broadcasting about? That "Russian assistance to Italy was 80% useless." What accuracy - up to a percent! I wonder who counted ?! Dying in the crowded hospitals of Bergamo? They assure that "in North Korea everyone has already died out." Only Kim Jong-un was left and today he "secretly begs the West for help." It’s complete nonsense - from whom the DPRK could get real help in a critical situation, it’s from China, and without any supplication. However, they write about China that he, it turns out, is "selling inactive tests for coronavirus." In fact, as far as it is known, just the Celestial Empire, almost the only one in the world, is giving away aid today left and right, barely recovering from the epidemic itself. Well, and of course, "on top" rehash of schizophrenic nonsense by Valery Solovy that "Putin got infected!" Yeah, dream, dream ... However, what is there to be surprised if the tone of this heinous bacchanalia is set at the very "top". Donald Trump, who had spoiled the beginning of the epidemic in his own country, did not find anything better than to say that the current US championship in terms of the number of cases is explained by the fact that "in China they hide the true numbers." Great again ... Meanwhile, in New York Manhattan urgently equipping "field" morgues. Not a hospital - morgues! Believe me, I do not feel the slightest gloating from this news, only bitterness. US citizens were held hostage to their faith in "great America" ​​and its isolated, mired in pride politicians. On the other hand, ordinary Americans who are truly sorry are one thing, but the state of the United States is completely different. Shaking in real agony, it continues to sow poisonous seeds around itself, trying to hold in the weakening hands the club of the “world policeman”.

What is the U.S. Treasury Department concerned about? The fact that more than 3 million diligent American taxpayers over the past week were among the unemployed? Growing like a snowball, public debt? And no! There yesterday they announced the introduction of an additional package of sanctions against another two dozen companies from Iran and Iraq, as well as a number of officials and politicians in these countries. Naturally - "for supporting terrorism." Presumably, this is exactly what the answer to the words of the Iranian president that helping his country from Washington could be to remove draconian restrictions. What is the State Department concerned about? Do you think the salvation of the country? And figs! There, either because of complications from the coronavirus, or simply desperate to come up with something more believable regarding the legitimate president of Venezuela, they accused Nicolas Maduro of ... drug trafficking and awarded a reward of $ 15 million for his head! Money, presumably, nowhere else to go. And there are no other problems either. This is not even madness ... It is something that has no explanation or name at all. Truly, "the dead grabs the living." The country that has made the most effort to bring the world to pieces today to its current state is still trying to dictate, threaten, demand! By the way, the Pentagon also shows extremely unhealthy symptoms. No, not in terms of the fact that the incidence among the personnel of the American army is for some reason 60% higher than similar, far from low indicators for the civilian population. And this, most likely, is greatly understated information, since the head of the department, Mark Esper, said yesterday that the statistics on the distribution of coronavirus in the barracks will be classified. Nevertheless, the generals of the US armed forces, you see, are already preoccupied with the "chaos and destabilization" that will certainly follow the pandemic "in a number of countries of the world." In any case, that is what General Mark Millie, chairman of the Joint Chiefs of Staff of the American Army, said. He’s already thinking about carrying out “humanitarian missions,” from which, in the countries that have fallen under the skating rink of “help”, all living things flee and weep, and inanimate - crumble and burn ...

How can?! How much longer should humanity endure? Returning to the era of the “unipolar world” centered in Washington, ours, which in fact turned out to be terribly fragile and defenseless, the world will most likely not survive. Once a mistake has already been made - in 1945, when we, in our naivety, mistook the Anglo-Saxons for allies and gentlemen who abide by the treaty. Joseph Vissarionovich simply did not have time to fix it, and the rest either did not want to, or did not do it. So maybe now is the time? Nobody calls to finish off the United States at the time of their misfortune. You just need to stop obeying their dictates. Put in place and do not give, sorry for the expression, climb on the neck of the whole world. These are not “imperial ambitions" - this is an urgent need for the entire planet Earth. Do you really think that this pandemic is the last ?! First you need to lay a modest bouquet on the grave of the UN prematurely and ingloriously rested and create a completely new international organization - some kind of World Health League, or something. Help the victims and after the end of the current disaster begin to prepare to ensure that the next we really meet the whole world. Relief fund? Great idea! Just let the green pieces of paper remain the national currency in the country where they were invented on our head. Yes, the rejection of the dollar will be painful, however, against the background of the hypershock that the world economy is already experiencing, this process will be many times easier than it would be in ordinary circumstances. And, in the end, in order to get rid of a star-striped noose, one can also tolerate. Still have to endure, and all. Let the Americans be fine! Let them heal, choose for themselves what kind of president they want, and live happily ever after. In their own country, let them come to others only as tourists, and not as carriers of “democracy” in the dollar and TNT equivalents.

The current chance for Russia is unique. Yes, the COVID-19 pandemic will pass through the world, collecting its terrible sacrifice. However, after it we may not only have sorrow, but also a new hope - for a completely different future.
Ctrl Enter
Noticed oshЫbku Highlight text and press. Ctrl + Enter
We are
Ukraine from the inside: traitors, curators and those who watch from the Kremlin
Ten "defeats" of Putin
Reporterin Yandex News
Read Reporterin Google News
Ad
The publication is looking for authors in the news and analytical departments. Requirements for applicants: literacy, responsibility, efficiency, inexhaustible creative energy, experience in copywriting or journalism, the ability to quickly analyze text and check facts, write concisely and interestingly on political and economic topics. The work is paid. Contact: [email protected]
28 comments
Information
Dear reader, to leave comments on the publication, you must to register.
I have an account? Sign in