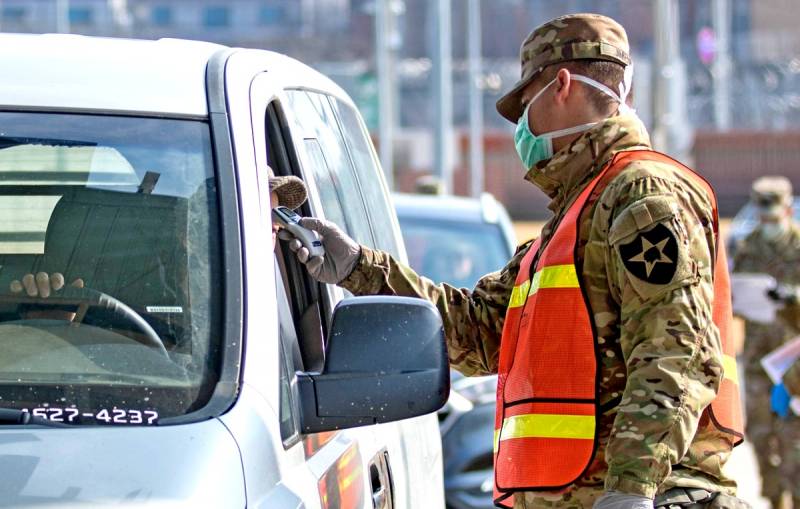 The global pandemic that hit our planet at the beginning of this year will probably go down in history textbooks. And, most likely (I really want to believe), not because of the number of victims or the total “coverage” of almost all of humanity, but because it, almost inevitably, will become the starting point of a new stage in world history. Today it is already possible to confidently sum up some completely obvious results of the events of recent months and draw conclusions from them. Which ones? Let's try to figure this out together.

Although the Celestial Empire was the first state to fall under the crushing and treacherous blow of COVID-19, today it is more appropriate to talk about her victories than about the losses she suffered in the fight against an invisible but deadly enemy. Yes, the number of Chinese people who have suffered the disease is by far the largest in the world, however, something suggests that very soon the country will lose this sad “primacy”. Economy? The fact that the national economy of the PRC is already "coming to its senses" and is beginning to recover from a tremendous shake-up experienced by it, was recognized even by the International Monetary Fund, an organization that, as we know, is not inclined to excessive optimism. More than 90% of the local enterprises and companies have already resumed their work and are now preparing to work tirelessly in order to regain the compulsory loss. According to financial analysts, Beijing now needs to fear not its own problems, but an almost imminent recession in the global economy, which, of course, will certainly affect it. So, according to analysts at the Australian & New Zealand Banking Group (ANZ), in the worst case ... the Celestial Empire will receive a decline in economic growth to 3.1% per year! But this is the most negative outlook. In its basic version, this year the country's GDP growth will exceed 4%, and next year it will reach all 6%. So for the Chinese comrades you can not worry at all. There, even an increase in unemployment in the most difficult months of the epidemic amounted to 1% (according to official figures). This is despite the fact that due to the consequences of the pandemic today, the International Labor Organization predicts that at least 25 million people on the planet will lose their jobs in the near future ... Yes, Beijing will have to spend more on liquidating the consequences of the disaster and supporting local businesses (which, however , carried out from the first days of the disaster), but if someone hoped that the Chinese economy would collapse under the influence of the coronavirus, it miscalculated miserably.

Generally speaking, one of the main achievements of the Celestial Empire is that its power and people showed the whole world: We can’t be blamed! It’s useless to use biological weapons against China; there’s nothing even to try to arrange a “color revolution” or something like that. In fact, the coronavirus epidemic became an exam and a school not only for Chinese physicians, but also for special services, military, civil administration and many others. The whole system of power in China with its impeccable and highly effective actions has proved: they can always “put things in order” in this country, even in the most difficult and catastrophic situations. By the way, there is no doubt that along the way, in the framework of the fight against COVID-19, the state resolved a lot of pressing issues, simply not specifically advertising it. The country was fairly “cleaned” from illegal immigrants and other dubious personalities. At the same time, we got rid of the mass of “unwanted” foreigners — as a rule, they didn’t have to expel them, they themselves rushed to the exit, pushing each other away. The system of control over public safety, which has almost reached perfection in China, has undoubtedly been improved even further - for example, the local security cameras now, as far as is known, identify people even in masks. And, by the way, the booze in Hong Kong, which delivered Beijing a lot of headache, subsided as if by itself. There is no doubt - a repeat of it in the near future is definitely not worth expecting. The main thing is that the whole world visibly and specifically felt its dependence on China - on its money, goods, supplies of components, logistics and production chains. A hundred times now they will think before quarreling. However, what a quarrel there! Residents of Italy, to whom the Chinese comrades, unlike their neighbors in the European Union, were the first to lend a helping hand, now they are almost idolized. And there is a reason! The authority and weight of China in the world has grown many times today, and this, believe me, is only the beginning of the process. It is quite possible that they will still be praying for a red flag with golden stars in many countries ...

At the time of this writing, the United States came in third in the world in the number of laboratory-confirmed cases of COVID-19 infection. Not by mortality, but by the number of cases - definitely. However, more than 30 thousand infected people are not potential 150 million, which, I remember, Donald Trump mentioned in his extremely “optimistic” statement. However, things are already going badly in the American economy. Bank of America economist Michelle Mayer predicts not a slowdown in its growth, but a 12% fall in the second quarter of this year! The government is desperately trying to save the situation, announcing the upcoming distribution of compensation to everyone. The first thousand dollars promised, as far as is known, has grown to three. Nevertheless, the US stock market has recently “collapsed” by a third and is not going to rise back yet. In the United States, voices are voiced with might and main that the country will be finished with tough quarantine measures rather than infection. At the same time, experts say: attempts to "preserve the health of society at the cost of destroying the health of the economy" will inevitably result in something very bad, right up to the collapse of the state. These quotes are not from materials of the “mouthpieces of the Kremlin propaganda”, but from articles published today by The Wall Street Journal and The New York Times. Moreover, the pandemic has already dispelled many misconceptions regarding the United States, including among their own citizens. Talking about “beautiful” and “affordable” medicine turned out to be a myth. By the way, as well as about the “powerful and reliable army” ... Another American media outlet, Politico magazine, smashes the country's “readiness” to deal with the biological threat to the core, stating: “We were completely defenseless!” There are not enough tests, the hospitals lack not only ventilators, but simply free beds. Everyone rushes about, and, it seems, do not understand too well what to do at all.

The following fact testifies to how serious everything is: the Pentagon has already compiled and approved the top secret plans of Octagon, Freejack and Zodiac. They are called, according to representatives of the department, "to ensure the continuity of the government in the most extreme cases." How extreme? They describe to the military an algorithm of actions in the event of a “total collapse” of power, the physical destruction of most of its representatives and the impossibility of constitutional continuity of powers of the president, Congress, Supreme Court, and so on. In fact, this is an instruction to transfer control of the United States into the hands of the generals. In any case, at the very beginning of February, the head of the Pentagon, Mark Esper, had already “activated” the US Northern Command (NORTHCOM), created under the leadership of Air Force General Terence John O'Shaughnessy, based in Colorado Springs. This unit, in fact, was created after the September 11 attacks precisely for the most emergency situations. Today it received instructions to begin preparations for conducting "emergency missions" ... The most interesting thing is that Washington continues to behave absolutely in its own style - a "world hegemon" and an all-planet "policeman", from where they point someone threaten, impose new sanctions. Moreover, the White House and the Department of State do not want to see completely clear things: the test for the very world leadership with which they are so bored, for the right to give valuable directions left and right, the United States has failed completely and irrevocably. Not only have they left their own NATO allies in Europe to the mercy of fate - today, US military transport aircraft are sweeping out coronavirus tests from literally bending from the Italian epidemic. The Chinese are sending medicines and remedies there.

Without a doubt, it is in accordance with such a changed algorithm of real actions in a crisis situation that in the future a system of completely new relationships in the world will be built. What can we talk about after the scandal with German scientists from CureVac, who are working today in collaboration with the Paul Erlich Institute, which is connected with the German Ministry of Health, to develop a vaccine against coronavirus? The shocking revelations of its leaders leaked to the press: huge money and all conceivable benefits for the fact that this drug would become the "exclusive property" of the United States, they were offered almost personally by Donald Trump. Very, you know, in his style ... Whatever the case, the Americans did not offer anyone assistance in the fight against the pandemic today. With the exception of Iran (obviously, in the order of mockery), which this proposal rejected with anger. Ayatollah Ali Khamenei, in response, called the Americans "charlatans whom no one else trusts," and Iranian President Hassan Rouhani quite reasonably offered as an aid to simply lift sanctions - at least for the duration of the pandemic. Washington, as one would expect, replied in deathly silence. Today the world is nailed by horror before COVID-19 and grief over those who died from it. But it will pass. And then people will begin to remember: who and how behaved during this disaster. Who helped, saved, supported, and who did not just spit on everyone around, but also made money on the mountain that hit the planet, or at least tried to cash in. People will not forget anything and draw conclusions ...

Relations between China and the United States continue to deteriorate. Beijing has not taken back its words about the "American origin" of COVID-19, and Trump and Pompeo, with the tenacity of parrots, continue to call it the "Chinese virus" at every opportunity. It is very interesting how, under the current conditions, Washington will continue its "trade wars" and what will come of it. Ultimately, the United States will definitely emerge from the pandemic with worse results than the Celestial Empire. The question is how much worse. China is already working for tomorrow, sending doctors, medicines, tests, humanitarian aid all over the world. There is no doubt that as soon as a vaccine is developed there, everyone will receive it. Well, or almost everything ... The fact that Russia, following the Celestial Empire, began to provide assistance to Italy itself is absolutely correct. And not only from the point of view of elementary human mercy and compassion. The world is not just on the verge of huge changes - it has already stepped beyond this threshold. Having adequately withstood the test of the pandemic, Russia may well take a place among the new leaders of the new world, along with China. And she must do it without missing her historic chance.
Ctrl Enter
Noticed oshЫbku Highlight text and press. Ctrl + Enter
We are
It's important4
Ukraine from the inside: traitors, curators and those who watch from the Kremlin
Ten "defeats" of Putin
Reporterin Yandex News
Read Reporterin Google News
13 comments
Information
Dear reader, to leave comments on the publication, you must to register.
I have an account? Sign in