Will the “oil war” grow into World War III? 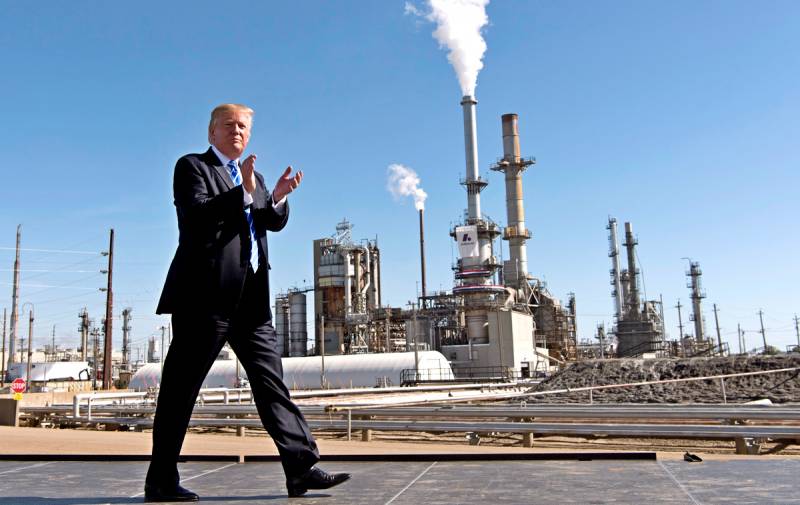 The United States, which recently announced its intention to intervene in the confrontation between Saudi Arabia and Russia that unfolded on world energy markets, seems to have decided that the time has come for such a move. At the same time, Washington immediately makes it clear on which side in this battle he intends to speak. They are going to "sort out the hard way" with our country, as if with some kind of third-rate colony of their own.


On the one hand, the motivation of the American authorities is easy to understand - their own crumbling pieces are pushing them to risky actions economy, the collapse of shale oil production and the growing wave of the coronavirus epidemic overwhelming the country. On the other hand, the White House must be aware that in the current crisis conditions, such escapades can end in the most deplorable way.

To whom - the carrot, and to whom the whip

The American media published information that in Washington "work has begun on new sanctions against Moscow - for destabilizing the international oil market." This is with reference to "informed sources in the highest echelons of power" reports such an authoritative publication as The Wall Street Journal. Does this sound like the truth? More than! It was not without reason that Donald Trump spread on the topic of the fact that he intended “in due time” to directly “connect” to the resolution of the contradictions between Moscow and Riyadh in matters of volumes of “black gold” production. Apparently, the head of the White House decided that the time had come. That's just to "connect" to the resolution of the crisis of overproduction of energy, he intends, as usual, in more than a peculiar way. Apparently, the Americans are going to agree with the Saudis “in a good way”, through diplomats from the State Department and with the participation of specialists from the National Security Council. Trump is prompted by these actions, in particular, by the position of his own Republican Party, demanding an end to the "oil lawlessness", "gently affecting" Riyadh, which so far remains one of the main US allies and partners in the Middle East. A group of 13 US senators belonging to it even came down to addressing the Crown Prince of Saudi Arabia, Mohammed bin Salman, with a letter in which he did not demand, but asked to abandon the current sharp increase in oil production: “We urge the kingdom to play a constructive leadership role in stabilizing the global economy and reduce anxiety in the oil and gas sector ... "

It is clear that diplomatic approaches of this kind, with references to the need to “rally in the face of the COVID-19 pandemic and join efforts to overcome its consequences,” will be accompanied by arguments of a completely different nature - like hints of the possibility of depriving the US of military assistance and the like . Nevertheless, apparently, they are not going to comply with Russia even the most formal rules of courtesy. They intend to dictate to her, moreover, the conditions for complete and unconditional surrender in the ongoing conflict. On the exact scale, the specific objects of the sanctions and the timing of their introduction there is no talk yet, but it is not difficult to guess how all this may look. In fact, Moscow will be faced with a choice: to leave all markets available to it for today “in a good way” or to get out “in a bad way”. Contrary to earlier statements made by Donald Trump that in the current conflict situation it is necessary to “find a middle ground”, the United States is clearly not going to agree on anything and agree on anything. Extremely reduce production and exports will certainly be prescribed to our oil industry. The dispute over the markets is going to be solved at the expense of Russia, redistributing its shares in them between the United States and Saudi Arabia. We will not agree to these humiliating and devastating demands - well, Russian oil will be declared "illegal" in the same way as previously Iranian or Venezuelan. And do not be seduced by the illusions that in this situation we will have allies - a recent decision by China, which has flatly refused to cooperate with Rosneft structures that have already come under US sanctions, is the best proof of this.

What Trump is silent about

The American president, who spoke quite extensively about the ongoing "oil war", I remember, lamented the "destructive impact" that it has on the economy of our country, according to his statement, "almost completely dependent on oil." Something there was also about the Saudis, but not so derogatory and categorical. To a certain extent, Trump, of course, is right - because of the extremely low prices for “black gold”, the Russian budget really has a hard time today. However, at the same time, he, as always, forgot to mention the enormous problems of the United States itself. After all, it is precisely the representatives of the shale companies that have grown in recent years in the United States cleaner than filthy mushrooms after a small rain (and to no small extent thanks to the efforts of just Trump), today they are begging him to save them from complete and final death. You can argue for a long time about who will last longer at an oil price below $ 20 per barrel - Russians or Saudis. The question is complex and debatable ... However, the fact that the American "shale" is already in the deepest debt hole, half a step from a wave of mass bankruptcies and a complete halt in production - this is not in doubt. Too many sources in the United States themselves indicate this directly, naming specific companies and the wild amounts of their debts. The fact that shale oil production is low-marginal and at current prices completely unprofitable is an axiom. However, this is also only the tip of the iceberg! The recession of the American economy has already begun, it is expected to decrease by 12% in the second quarter, a double increase in unemployment (a million Americans will be on the street every month) and an annual decline in GDP of 0.8% instead of growth. This is not “Kremlin propaganda”, it is an official statement of Bank of America. Goldman Sachs and Morgan Stanley banks announced the onset of a global crisis that will affect the whole world, but will hit the United States almost the hardest ...

Now about Saudi Arabia. Today, it is mindlessly and blindly repeating its own mistakes five years ago, when it tried to destroy the production of shale oil in the United States with exactly the same “play for a fall” in the energy markets, and in the end almost itself came to a complete ruin. These allegations, again, are not being heard from some "mouthpiece of the Kremlin", but are expressed by Simon Watkins, an independent American expert who once headed the "oil" direction at the local agency Platts. The analyst recalls that the "price war" started in 2014-2016 cost Riyadh $ 450 billion (according to the International Energy Agency) and other major financial troubles. Saudi Arabia itself, accustomed to prosperity with a purely surplus budget, by 2015 got a “hole” in it of almost 100 billion and simply “burned” 250 billion of its own reserves, trying to stabilize the situation. This Arab country approached the current confrontation with a budget deficit, which, according to the most optimistic forecasts, should have been covered by 2028, but only at prices not lower than $ 84 per oil barrel. The upcoming bankruptcy of Riyadh "within three to four years" talk in the upper echelons there politicians went back in 2016. With the then, again, relatively "sane" value of "black gold". What they are counting on now, flooding the world with almost free oil is absolutely incomprehensible. Watkins, for example, believes that the country's leadership is seized by "collective amnesia", which does not give him reason to reason and weigh the consequences of his own adventures.

All of the above is evidence of only one thesis: both the United States and its various Arab allies are now literally on the edge of the abyss. And this means that they may well decide to save the situation literally at any cost. The only problem is that Russia today has nowhere to retreat. From the word "completely." Our shameful withdrawal from energy markets will mean not only a geopolitical defeat unprecedented since 1991, but, alas, the collapse of the economy, and in the foreseeable and near future. If the budget of the country for some time, even with considerable losses, even at the limit, but withstands low oil prices, it will withstand a complete or almost complete cessation of energy exports. Well, in the USA, in fact, this is exactly what they are striving for. To, so to speak, solve all problems with one blow. They are not inclined to give up their claims to the role of the center of the universe and the "navel of the Earth" in the least. Let the pandemic, let the crisis, even the Apocalypse! All the while, Washington has continued with the stubbornness of a furious machine to stamp new sanctions, restrictions, duties ... against Iran and all those who cooperate with it. Against European aircraft manufacturers, “offending” the poor Boeing Co., which, incidentally, is also on the verge of bankruptcy. Surely, something new will soon be invented against China, which the US obviously does not plan to end the confrontation with. The United States intends to continue to wage war with the rest of the world, and, apparently, it is sacredly believed that they will win it. No matter what the cost ...

Worsened in 2014 and becoming more fierce with each new round, the confrontation between the United States and Russia, sooner or later, almost inevitably should have come to a direct clash, which could not be avoided. The "turner" will lose, and that's all. The COVID-19 pandemic, from which our country, as of the present moment, has every chance to come up with a much better outcome than the Americans, simply accelerated the events. It is entirely possible that Washington will simply decide to “strike ahead”, try to finally break Russia, while, as it seems to him, he can still do it. I really do not want to think that in addition to a coronavirus attack comparable in scale and damage to the world war, we are faced with an even more frightening prospect. However, it is very likely that the moment is coming when Russia will have to defend its interests with literally all available forces and means, right up to the Third World War. Or perish ...
Ctrl Enter
Noticed oshЫbku Highlight text and press. Ctrl + Enter
We are
A dangerous mistake or an accurate calculation: why did Russia disrupt the oil deal
The “oil war” with Russia: the “shale revolution” in the United States came to an end
Reporterin Yandex News
Read Reporterin Google News
Ad
The publication is looking for authors in the news and analytical departments. Requirements for applicants: literacy, responsibility, efficiency, inexhaustible creative energy, experience in copywriting or journalism, the ability to quickly analyze text and check facts, write concisely and interestingly on political and economic topics. The work is paid. Contact: [email protected]
11 comments
Information
Dear reader, to leave comments on the publication, you must to register.
I have an account? Sign in