Ukraine is between an epidemic, Maidan and default 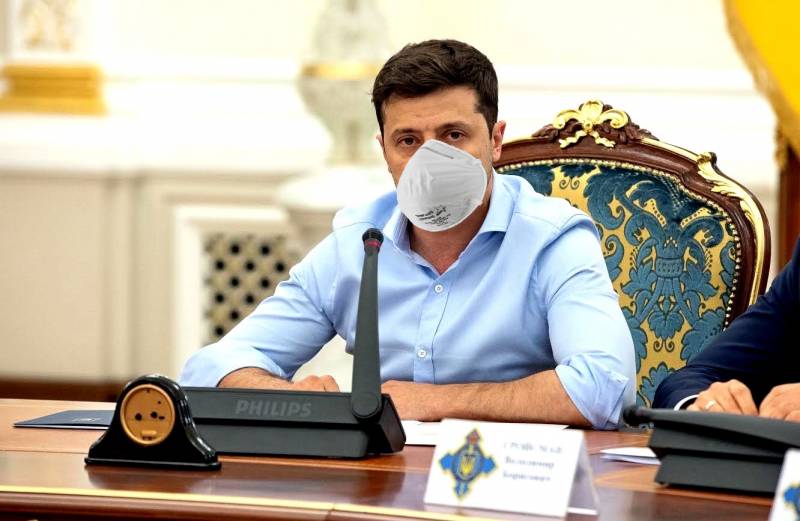 The world is struggling with a pandemic ... For someone it turns out just brilliantly, like in China, where, in fact, its hearth broke out. And someone's doing worse. However, there are states which, when looking at the “anti-epidemic measures”, can only shrug their hands or clutch their heads. The best example here is Ukraine.


What is happening on its territory is of great importance for our country - after all, the fraternal people, and the common border with the "unbroken" has not gone away. If a catastrophe erupts there, it will certainly affect Russia, to a greater or lesser extent. And the thing, apparently, is exactly what is going on ...

Something needs to be introduced ... But what ?!

One gets the impression that the current Kiev government, which consists of a good percentage if not of booth comedians, then of completely random people whose managerial professionalism tends to zero, either does not know what to do at all, or does not understand what it is itself creates, making hasty and extremely rash decisions. On the one hand, among the armful of "anti-virus measures", en masse and in a hurry introduced by the government and the Verkhovna Rada, there are also quite sound, quite justified and appropriate. However, everything that happens today in Ukraine in the complex will almost inevitably lead her to a very sad ending. What are you talking about? First of all, that the quarantine-restrictive measures introduced now in Kiev and other regions, inflict a severe blow to the already barely existing the economy "Not down". Many in Kiev began talking about the impending default long before the current emergency - later we will examine in detail why. The situation is even worse in the social context. Already today, quarantine has left a lot of people without work - in the areas of catering, public services, transportation and others. Every single market is closed, from which many citizens "fed", both small entrepreneurs and employees. A large number of enterprises in an atmosphere of increasing panic stop or seriously reduce their activities, sending employees on unpaid "holidays". In Denmark, for example, the government promised to cover three-quarters of the salary funds for private companies that were affected by the restrictions, provided that they did not cut jobs. In Ukraine, nothing of the kind can be dreamed of.

And where to get the funds for such measures, given the huge budget in Ukraine, and every day an ever-increasing “hole” under 20 billion hryvnias? Moreover, the suspension of activities of an increasing number of both state and private companies will inevitably mean even greater losses for the treasury. What are exports or imports with tightly clogged borders? There is one more problem, specific purely for “non-wintering”. One of the most significant sources of fueling its economy, and, very importantly, currency, for many years was money transferred and brought in from behind the cordon by millions of “working people” outside the country. The sums of these revenues were estimated in billions of dollars, but now they are sharply and instantly reset! Forced people returning to their homeland for some time will eat up accumulations (those who have them), and then join the ranks of the unemployed. Ultimately, all this can lead to a social explosion in the form of real “hunger riots”, in comparison with which the “Maidan” of 2013-2014 will seem to Kiev a childish babble. However, it is very likely that neither the parliament, nor the presidential administration, nor the Cabinet of Ministers understand this. Generally speaking, the “brilliant” example of completely ill-conceived events is the closure of the subway in all Ukrainian cities where there was one. As planned by the authorities, it was supposed to be replaced by ground transport, in the salons of which citizens will be disciplined to drive in an amount of not more than 10 people at a time. In reality, this led to a severe transport collapse and minibuses with trams packed to such an extent that you can easily pick up not just a coronavirus, but an unwanted pregnancy. The effect is exactly the opposite of what was planned. Fought ...

The epidemic is just the last straw

The fact that the state debt of Ukraine in January-February 2020 increased by 2,6% (that is, by 46 billion hryvnias more than), the head of the Accounts Chamber of the country Valery Patskan said at the very beginning of March. At the same time, in 2019, the state debt of Ukraine grew by 6 billion dollars and reached 84,36 billion dollars. This year alone, the country needs to make payments on external borrowings in the amount of $ 17 billion. At about the same time (in early March), the prices of securities that Ukraine issued as part of a government debt restructuring carried out by one of the previous finance ministers in 2015 began to plummet in global stock markets, which are now in hard times. The last hope of Kiev was money from the IMF - a loan program in the amount of $ 5 billion, at least 2 of which could come this year. For the sake of obtaining it, Zelensky even tried to force MPs to violate quarantine and consider laws that lenders require (as a prerequisite for selling Ukrainian land) as mandatory conditions, however, according to reports, the IMF made clear on March 17 that there was no money will be. We are lacking ourselves ... There are persistent suspicions that any external borrower, whom in the current troubled and crazy time will try to turn “non-stop”, in response will build her the same combination of three fingers. Nobody wants to invest now in much more stable economies. The same Cabinet announced something about its readiness to ask for money from international structures as "assistance in the fight against coronavirus," however, here too, the cookie will surely be output. The fall in energy prices in the spring and summer does not give Ukraine any benefit at all, but the decline in global demand for metal (which is perhaps the only export item that actually gives currency) will be extremely painful.

What’s going to be there! Already today in the country there is a terrible physical shortage of cash currency. It is connected, first of all, with the fact that the people, stupid from the “coronavirus” panic pumped from each iron, massively rushed to buy dollars and euros. According to the recognition of the leadership of the National Bank as “uncool”, in just a couple of weeks, its citizens thus raked out at least $ 300 million from the “bins of the motherland”. The government daily throws huge amounts of money into a frenzied foreign exchange market, but that doesn’t help at all - from 24 hryvnias per dollar the national currency has “fallen” to almost 30. According to most local financial analysts, this is far from the limit. Recently appointed Prime Minister Denis Shmygal sadly broadcasts about “the need to prepare for the crisis,” which, when translated from official into human language, means the inevitability of a final collapse of everything and everything. And, nevertheless, not having, apparently, not only a clear strategy to overcome the epidemic, but even an understanding of the tactics of the relevant actions, both Kiev and the local authorities in some regions continue to “cheat” the situation by introducing many restrictions and prohibitions, establishing a state of emergency and hinting at the possibility of a state of emergency in the country. The main thing is that on the very first day of the “coronavirus hysteria” that was unleashed in Ukraine, the parliament there introduced enormous, truly draconian fines and even criminal liability (up to 3 years in prison) “for violating quarantine orders”. But Zelensky “on the lord’s shoulder” promised the pensioners to throw a thousand hryvnias (less than $ 40). The government hinted that perhaps they would think about lowering the quarantine fees that reached sky-high heights for utilities. But not everyone, and not much ... Generosity knows no bounds!

"Emergency", how is salvation for power?

Ukraine would not be Ukraine if, immediately after the introduction of quarantine measures, the wildest rumors did not begin to spread and “pranksters” began to frolic, whose “humor” could not be called cannibalistic. Odessa was especially noted here (quite expected). And it’s okay there, they only thought of sending out a message in messengers that from the water taps “to prevent infection” instead of water, alcohol is about to flow! Many believed and made calls to the dispatchers of the local Vodokanal to hysteria (they even had to make an official refutation of this crap)! Well, it would have been extremely “genuine” warnings on social networks that “the city will be sprayed with disinfectants from helicopters at night” and that parents who are released onto the street face “two to five years in prison” ... On some Odessa Internet resources already in full swing videos with the "mass grave of the bodies of the dead" and similar horrors. Little by little, doubts are beginning to arise - are we dealing with spontaneous "folk art" that is a response to the absurd actions of the authorities, or does someone knowingly want to push the "coronavirus psychosis" to the highest limit? Really stop the pandemic, if it breaks out in the country, Kiev has nothing. This is a completely objective assessment, given the increasingly widespread information (confirmed, for example, by some people's deputies) that, having glanced over the impending disaster into the warehouses and vaults of the State Reserve, representatives of the current Ukrainian government found a complete void there. No food, no fuel, no medicine ... If the virus begins to spread according to the worst, “Italian” scenario, it will instantly turn into a national catastrophe.

There is, by the way, a version of what is happening, according to which the panic chaos created in Ukraine today has both clear tactics and a well-thought-out strategy. Knowing full well that in the current world situation, the country can’t avoid the worst economic crisis and large-scale social upheavals, those in power gradually, gradually and systematically bring everything to the imposition of a state of emergency, in which you won’t especially rebel - default is there, devaluation, or at least general pestilence and smooth. According to the "extraordinary" laws adopted since the filing of ex-president Poroshenko, the state and its "punitive bodies" in this situation receive virtually unlimited powers. Really, the “Ze team”, sensing that the thing really smells like “fried,” decided to use the situation that turned up by the way in order to use such useful work of its predecessors as the last means of its own salvation ?! The West made it clear that it’s not down to earth - it does not intend to support it at such a difficult time. The Russian Foreign Ministry, represented by its deputy head Andrei Rudenko, said that so far there have been no requests for help in connection with the pandemic from Kiev. “They will do it — consider in a general manner,” the official summarized briefly and restrainedly. Well, if there is at least some benefit from the coronavirus adversity that has fallen on the world, then this is only a demonstration of what troubles can result in broken alliances and good-neighborly relations.
Ctrl Enter
Noticed oshЫbku Highlight text and press. Ctrl + Enter
We are
Peace enforcement operation. Russia inflicts a preemptive strike on Kiev
Three years left: Ukraine will be sold in parts
Reporterin Yandex News
Read Reporterin Google News
Ad
The publication is looking for authors in the news and analytical departments. Requirements for applicants: literacy, responsibility, efficiency, inexhaustible creative energy, experience in copywriting or journalism, the ability to quickly analyze text and check facts, write concisely and interestingly on political and economic topics. The work is paid. Contact: [email protected]
17 comments
Information
Dear reader, to leave comments on the publication, you must to register.
I have an account? Sign in