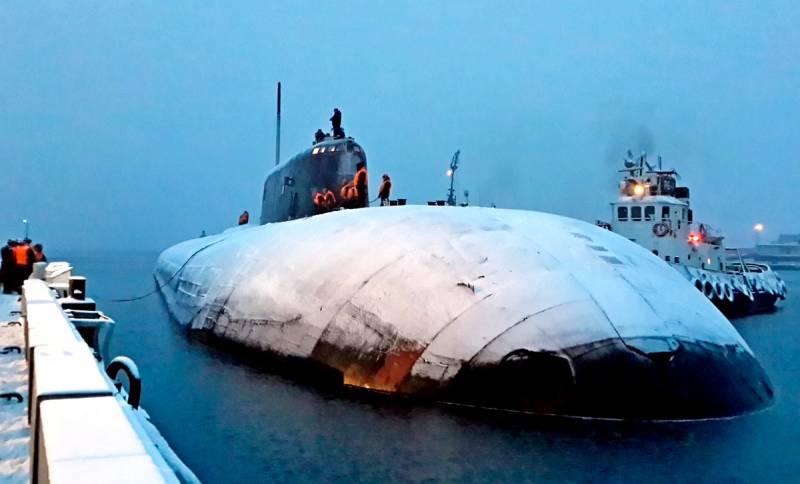 In the past few years, the geopolitical confrontation between the USA and the Russian Federation has seriously intensified. The primary means of deterring an aggressive external policy Since Soviet times, Washington has been our "nuclear triad."


Military experts note Moscow’s attempts to regain previous positions in its naval component, primarily in the submarine fleet. What difficulties do our submariners face?

In the West, they differently assess the real capabilities of Russian nuclear submarines. For example, the portal We Are The Mighty, clearly deciding to “hijack”, scared its readers of the submarine Yuri Dolgoruky of the Borey class, which alone is capable of destroying New York with Bulava missiles:

A predator slowly rises from the depths of the Gulf of Mexico, like Godzilla, but even more destructive and deadly.
It is worth mentioning that up to 10 SSBNs (atomic submarines with ballistic missiles) are on alert by the United States. Of these, right now, four are capable of delivering a nuclear strike against Russia or China, two from the Pacific Ocean, two from the Atlantic. This is said to mean that the game is not played in one goal.

Even one single nuclear submarine armed with ICBMs can inflict irreparable damage to the enemy. Having a significantly weaker surface fleet than the United States, the Russian Federation is forced to rely on submarines. In the Russian Navy, there are three Borey class submarines in service, which scared the Americans by the media, one is being tested, and four more are under construction. After they enter combat duty, the level of presence of domestic nuclear submarines in the oceans will approach the Soviet level.

Nevertheless, even such a formidable weapon, like SSBNs, has its weaknesses, which should be mentioned. For example, standing at the pier, she will be defenseless against a sudden disarming strike, but this will not prevent her from releasing ICBMs at the enemy, even standing at the pier. That is why it is important that submarines spend as much time as possible at sea on alert duty.

The second most important problem is the submarine’s exit from the base to the patrol area. There is a constant struggle between the means of detecting nuclear powered ships and technology ensure their secrecy. The American SOSUS (SOund SUrveillance System, sound observation system), which controlled the Northern Fleet's access to the Atlantic, has long been outdated and mothballed, but they have been replaced by rapidly deployable multi-element regional underwater lighting systems (FOSS).

The main submarine extension routes have long been known to a potential enemy, therefore only a strong surface fleet is capable of providing A2 / AD (anti-access and area denial) zone for them, comparable in capabilities to an enemy’s at least in the local area. Otherwise, the loss of even one submarine cruiser will be a serious blow to the Russian "nuclear triad." What can be done to increase the survivability of domestic SSBNs so that their service does not look like a game of "cat and mouse"?

Among the solutions that suggest themselves, the first is the construction of a powerful surface fleet. The business is good, but very expensive and long. The second option is to create on the same platform as the SSBNs the PLARK series (nuclear submarines with cruise missiles suitable for non-nuclear, conventional warfare). Thus, the attention and efforts of anti-submarine reconnaissance of the enemy would be dispersed. Finally, it is possible to increase the overall security of Russian SSBNs due to underwater anti-aircraft missile systems and increasing the depth to which submarines are capable of diving, where torpedoes will be powerless against them.

Submarine fleet service remains a daily intense and dangerous game of cat and mouse.
Ctrl Enter
Noticed oshЫbku Highlight text and press. Ctrl + Enter
We are
Putin and Lavrov have done their job. General Shoigu, your way out!
Ten "defeats" of Putin
Reporterin Yandex News
Read Reporterin Google News
3 comments
Information
Dear reader, to leave comments on the publication, you must sign in.