“Russia is burning”: what is behind Lukashenko’s harsh words about Moscow 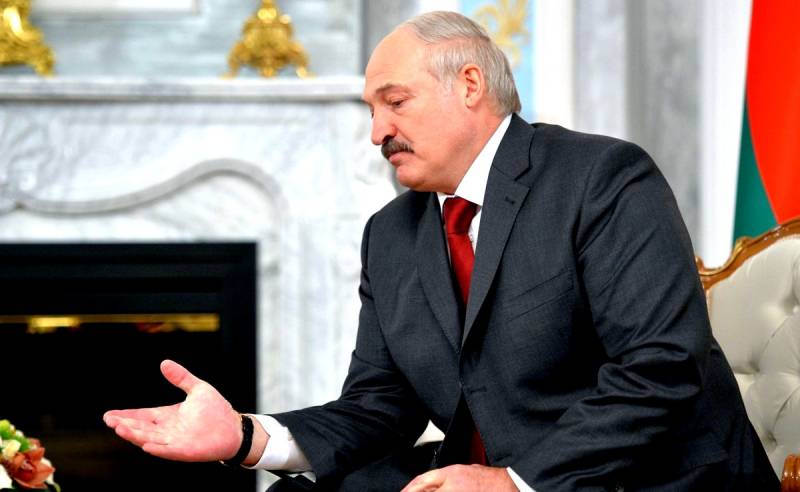 Alexander Grigoryevich again took offense at Russia. No, not even that - literally, he was offended in his best feelings when he heard about Moscow’s decision to block the border with his country. In the anti-Russian rhetoric of the Belarusian president that followed, there were perhaps more hysterical notes than after some regular failed negotiations on oil and gas export.


Not so long ago, with all his behavior, he made it clear that he and his country could "do well" without their immediate neighbors becoming so step-like, Lukashenko was seriously nervous, it was worth it to fall again at the long-standing border barriers. Previously, you had to think - and make the right decisions. Now what ...

The current situation, in fact, is the first, but very characteristic example of what could be the consequences of Minsk’s refusal to deepen integration with our country. But you yourself refused to move towards the creation of a truly Union state in which the borders would turn into a pure convention ?! Nevertheless, Lukashenko soon after the announcement by Russian Prime Minister Mikhail Mishustin of the ban on the movement of citizens through the Belarusian-Russian cordon to prevent the spread of COVID-19, began to accuse Moscow of "making this decision without consulting." Why consult, if you are so independent ?! Nevertheless, the actions of the Russian side, which seemed to be a complete surprise to Alexander Grigorievich, caused a number of very striking speeches, which are quoted by both Belarusian and Russian media today. The first time the "father" was spoken out at a meeting with the head of the presidential administration Igor Sergeyenko and Secretary of the Security Council Andrei Ravkov. Then - in the process of meeting with the leaders of local authorities, which took place on the same day, March 16. In both cases, the conversation for some reason very quickly moved to the level of “tram argumentation” in the style of “the fool himself”. The Belarusian leader did not spare bright colors and harsh expressions to convince the interlocutors: in Russia, the situation is much worse! According to him, in our country there is simply a “fire”, it is “blazing all over” from the coronavirus! And, therefore, it is still very necessary to see - "to whom to be closed from whom." At the same time, links were made to our own prime minister, who, of course, never said anything like that. Yes, and why?

However, the true reason for the bitter lamentations of Alexander Grigorievich about the "native Russia", which "closed", worthy of the best tragedies of our time, was discovered quite quickly. From appealing to supposedly fraternal feelings, he smoothly turned to completely mercantile questions, recalling the “110 million tons of transit cargo,” which must be moved annually through the border that has now appeared on the castle. “Have they agreed to carry through Ukraine?” Or through the Baltics ?! ” - that’s what turns out to excite Lukashenko. And his rhetorical question is whether Minsk should think “whether there is a coronavirus in the oil flowing through Druzhba and it sounds like a direct threat to Moscow. Ugh ... Again selfish interest and an attempt to weave the oil issue. Some kind of mania. By the way, attacks on the “blazing fire”, by the way, were deeply offended in the domestic Ministry of Health. The local press service even issued an official statement in which it unobtrusively advised the Belarusian leader to arm himself with a calculator and calculate how many people were infected in each country in relation to the total population. Let me remind you - at the time of this writing, the ratio was 93 registered cases in Russia against 36 in Belarus. Well, we don’t have three times as many people ... The Ministry of Health of Russia absolutely clearly and unequivocally pointed out that the decision of our government was caused by the fact that the neighbors "are not taking proper measures, including those recommended by WHO" for prevent infection from “third countries” in their country. And before talking about the fact that this country “can lie over” Belarusians who are full of health, their president should finally look at things realistically and start already doing something to counter COVID-19.

"The tractor will heal everyone"

In truth, many observers and experts (as well as your humble servant) today are greatly amazed at how Minsk “fights” the pandemic. From a country with more than strict discipline, an extremely “well-trained” vertical of state power and the ability to take any, including the most unpopular decisions and measures to prevent the spread of infection, we expected, let's say, a slightly different behavior. "Old Man will teach the Chinese how to drive the virus!" - many foresaw. However, Alexander Grigoryevich, for some reason that is obvious only to him, continues to behave as if no pandemic, the epicenter of which has moved today from Asia to Europe, that is, directly to the borders of the state entrusted to him, does not exist at all! Some of his public statements on this subject are simply amazing to the core. He calls on Belarusians “not to run around pharmacies, not to buy masks and medicines.” He suddenly complains that these masks were “sewn — there is nowhere to go,” and now you’ll have to sell them to Germany ... Notice that they should not be sent to Russia as “brotherly” help, since they themselves are not needed, but sold for hard currency. Well done, "Old Man", he will not miss anywhere! And Lukashenko praises local doctors who “do not close the borders, shout neither a whine, nor raise noise or dust ...” Well, I would. If they tried to blather. In truth, after such "praises" to doctors at the place of Belarusians, I would be worried. The president also philosophizes on the theme that "the borders were closed, but the world is still sick." Is cunning? Doesn't understand what he is saying? On the other hand, all these “pearls” fade before his own statements, such as: “There would be no happiness, but misfortune would help - though those of us will learn how to wash our hands, who did not know how to do this before!” Or another, which is, perhaps, the most clearly articulated “anti-coronavirus manifesto” of the “father”: “No need for panic, you need to work! It's nice to see how people in the village are plowing now, and not talking about viruses. Tractor - he will cure everyone! ”

It cannot be said that a similar, unprecedented, perhaps, not in any country of the world, attitude to the pandemic would find universal support and understanding in Belarus. For example, the coordinator of the civil campaign “European Belarus” Dmitry Bondarenko bluntly stated that “the Belarusian army should immediately arrest Lukashenko and impose quarantine in the country.” Not all the residents there are certainly so aggressive and categorical, but an underlying misunderstanding of the actions of the authorities is growing. Moreover, it is accompanied by, so to say, not very encouraging incidents. In Lida, for example, there was a sensational story with a truck driver who, returning from a flight to infected Europe, came to the hospital to take tests for coronavirus. And then he simply ... escaped without waiting for their results. He locked himself in his own house and did not want to open it to either the doctors or the police until it became clear that the test result was negative. Would it be positive? So much for the country of universal discipline ... Claiming that he would not even think of closing the borders with either the West or the East, Alexander Grigoryevich very frivolously overlooks the fact, for example, that Poland has accumulated today (thousands, and even tens of thousands) of Ukrainian “zarobitchans” from countries affected by the COVID-19 epidemic that cannot get home. Ukraine, with all its not too adequate power (and much less than the officially recorded number of cases in Belarus), the borders are almost completely blocked. What if all these people tomorrow or the day after tomorrow rush through the remaining open Belarusian border with Poland? Yes, across the country - from West to East, to the cordon with Ukraine, hoping to cross it with "partisan paths." How many of them may be infected, who will spread the coronavirus throughout their path ?! And this is only one option out of many possible ...

A friend is known to be in trouble. However, the one who remembers friendship only when he “cooks”, and also because of the fact that, in this case, as he believes, violates his interests, raises serious doubts about his own sincerity. Minsk has repeatedly been asked to speed up the process of integration of countries - by now, progress could have been more than serious. Then, most likely, the question of closing the borders in Moscow would not be raised. However, all attempts by the Russian side to move the matter of mutual rapprochement from a “dead point”, on which it, by the efforts of just the Belarusians, “hung” tightly from a certain moment, crashed on the “oil issue”, “tax maneuver”, disputes and squabbles that were conceived in the desire to continue to use the unlimited preferential regime, giving nothing in return. Now Alexander Grigoryevich recalls that Russia is “dear” ... I would not want to give his completely different statements - about the “alien war”, “bending” and the like, but where can I tell the truth? Even today, he continues, choking on the incomprehensibility of anyone, saying untrue things, pouring reproaches and slandering, instead of taking off his “pink glasses” and honestly looking at his own problems.

The representative of the World Health Organization in Belarus Batyr Berdyklychev declares the inevitability of the further spread of the disease - contrary to the wonderful "tractor" recipes from the "father". What can I say, if for some time the Belarusian “opposition” even spoke out in support of Moscow’s decision! The head of the Belarusian Congress of Democratic Trade Unions, Alexander Yaroshuk, called the actions of local authorities inside the country “inadequate,” and Lukashenko’s insult to Russia “childish,” caused by a lack of understanding that “this is done for the benefit of the people.” There is simply nothing to add here.
Ctrl Enter
Noticed oshЫbku Highlight text and press. Ctrl + Enter
We are
Ukraine from the inside: traitors, curators and those who watch from the Kremlin
Ten "defeats" of Putin
Reporterin Yandex News
Read Reporterin Google News
Ad
The publication is looking for authors in the news and analytical departments. Requirements for applicants: literacy, responsibility, efficiency, inexhaustible creative energy, experience in copywriting or journalism, the ability to quickly analyze text and check facts, write concisely and interestingly on political and economic topics. The work is paid. Contact: [email protected]
6 comments
Information
Dear reader, to leave comments on the publication, you must to register.
I have an account? Sign in