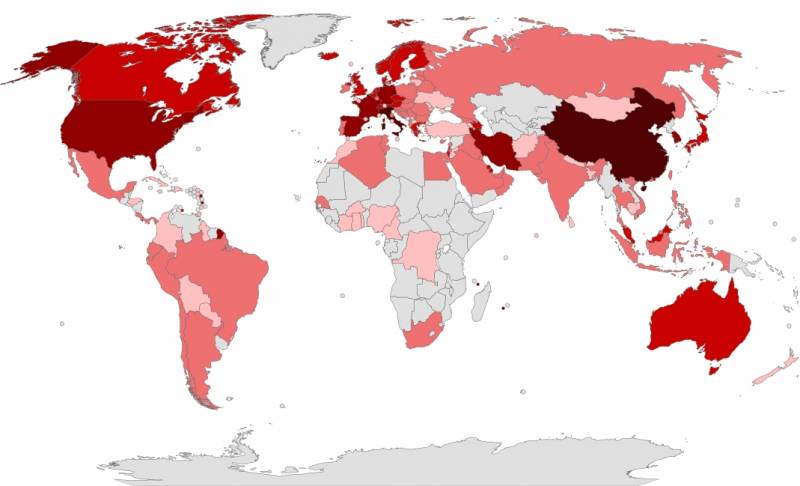 So, the worst thing happened: the World Health Organization, after much doubt and “fussing”, recognized the wave of COVID-2019 virus that swept through the world as a global pandemic that threatens all of humanity. However, there is no reason for panic, tearing your hair and fainting. The coronavirus is still not a plague or smallpox, which at one time "mowed" entire countries. In percentage terms, mortality among those infected with this infection is not so frightening.


If (pah-pah-pah!) Something extraordinary does not happen, like an unforeseen mutation that will give rise to a new, much more dangerous strain, humanity or some significant part of it is unlikely to die. But the fact that the world will never again be the same as before December 31, 2019 is certain. What can change dramatically in it?

Globalization - into the sewers?

Seeing off the old year 2019, mankind did not suspect that on this festive night, it says goodbye to the globalized world order that has become so familiar and convenient for him. Prepared (and practically already started) to live, as the great proletarian poet Mayakovsky wrote, “a single human hostel”, almost without obstacles and barriers between states and continents, where enormous distances and differences of languages ​​and cultures were leveled, and even reduced at all to no modern technology and other manifestations of progress, the human race suddenly ran into an extremely unsightly wrong side of all that it was so proud of. It turned out that the erasing line and the border of globalization have a “dark side”, and not the one that gives away a bit of conspiracy theology that its opponents, who were organizing protests during the summits of the different “Sevens” and “GXNUMX”, shouted for many years, but quite visible and concrete. One of the main horrors of mankind, which threatened him in those days when it was floundering in the mud of the Middle Ages and even several centuries after that - a deadly infection, a deadly weather, pestilence, as it turned out, did not disappear anywhere. It would seem that this scourge was reliably and forever laid in the grave of the development of medicine, pharmacology, the most common hygiene and sanitation. However, the victory turned out to be imaginary. The “killer” deadly epidemics progress itself helped them to return to the world by attaching “wings” that allow them to spread across the planet with unprecedented speed. The opportunity to have breakfast in Shanghai, dine in New York and catch dinner at the Rio carnival before dinner ... Isn't this a wonderful detail of the modern world? Wonderful. In the event that the described movements are not carried out by someone who already, without knowing it, is the carrier of some deadly virus rubbish ...

A no less painful blow was the realization that almost the entire world economy literally in a decade and a half, it was almost tightly tied to one single country - China. The Organization for Economic Co-operation and Development (OECD), which published a special report last week that provides a forecast for the development of the global economy for the current year, emphasizes that the unprecedented compared to past epidemics is caused precisely by the fact that “the world economy has become significantly more interconnected and China plays a much larger role in global manufacturing, trade, tourism and product markets. ” However, her experts are still quite optimistic - in their opinion, global GDP will still increase from 2.4% to 1.5%, depending on the pace and scale of the spread of the disease. Moreover, the OECD is inclined to believe that by 2021 the global economy will recover to the level that preceded the epidemic. Much more gloomy forecasts sound, for example, from researchers from the National University of Australia (ANU). The local wise men counted as many as seven models for the further development of the situation - one “better” than the other. How about, for example, the option of reducing global GDP by $ 2.4 trillion and killing 15 million people around the world? Not really? For your information, this is the best forecast of the Australians ... By the way, one of the reasons that scientists name as the main among those that allowed the coronavirus to "ramp up" with might and main and cause such a breakthrough of troubles is the low speed of response of governments and state bodies to news of his appearance. If the closure of borders and the cessation of flights began earlier - perhaps the scale - of both damage and mortality - would be much smaller. Humanity has relaxed ... But in vain!

What needs to be changed ... But what?

By the way, the voices of those who have finally come to a fairly obvious conclusion have begun to be heard more and more lately recently: in the current catastrophic situation, communist China has proved not only its own economic power, but also the incredible effectiveness of its state and public institutions. Against the background of an ideal order, clear organization, incredible consciousness and discipline of citizens who allowed a huge country struck by a deadly virus not to fall into chaos and anarchy, but rather quickly and effectively organize resistance to disaster, the “advanced democracies” of the Western countries look somehow, softly saying pale. While they are thinking and debating in China, they are acting to save people. Moreover, according to reports, they have already triumphed over the coronavirus! The local Ministry of Health reports with quite legitimate pride: in the disaster that has become the epicenter of the disaster in Hubei, there are no new cases of infections, except for Wuhan itself. In the remaining regions of the Celestial Empire, only 7 new cases of the disease were revealed, of which 6 were imported. Moreover, UBS Global Wealth Management analysts argue that the “black line” is ending for the Chinese economy, without having inflicted the damage that could have been expected in the current emergency. One of the reasons is that up to 60% of the Chinese economy falls on domestic consumption, which is why a temporary drop in exports from the country is far from as painful for its national economy as it might seem at first glance. The country's GDP growth, of course, will decrease, but in no case will it stop and turn into a fall. And this is great luck for the rest of the world.

According to the International Monetary Fund, in 2002, China’s share in the world economy did not reach 8%. Last year, it amounted to more than 19%, showing more than double growth. According to the calculations of specialists of the World Trade Organization, the Celestial Empire from 2005 to 2015 increased its own share of participation in global production and sales chains by 10%, today it is at least 35%. By supplying companies around the world with at least 10% of intermediate goods (components, assemblies, semi-finished products), without which it is impossible to create final products, the Chinese comrades also increased the production of high-tech goods from components obtained from outside. In just 10 months of last year, Chinese airlines transported more than 60 million passengers around the world, demonstrating that this country, unnoticed by everyone else, has become a real “locomotive” of globalization, “tying” to itself both production and trade, as well as transport and logistics streams. The next step in this direction should be the implementation of the megaproject “One belt - one way”, which would mark another victory for Beijing in the struggle for world economic domination. What will be his fate now? Opinions differ. Some analysts are inclined to argue that the COVID-2019 epidemic, even having ended relatively well, will inevitably push the world towards de-globalization, a kind of “fragmentation”, strengthening borders between states and a desire for lesser industrial integration. There is, however, a completely opposite point of view, based on the fact that in the end, after the wave of infection subsides, it will be China that will be in the strongest position. With all the consequences, as they say ...

"One humanity" does not exist. Proven by coronavirus

Today we can say one thing with confidence: a story in which all of humanity, united and harmoniously united, in a single outburst overcomes global problems (repels hordes of alien aliens, saves the Earth from a climatic catastrophe, and so on), so far it can be left to the mercy of exceptional optimism for science fiction writers and blockbuster screenwriters. It is worth coming a truly formidable and big trouble, as the vast majority of states immediately come to the fore slogans about the notorious hut. "Each for himself, one God for all!" - Something like this looks in reality approximately the principles by which the absolute majority of not only governments, but also international organizations act in a critical situation. Neither the UN was able to unite all the inhabitants of the Earth in the face of the impending pandemic (which once again proves its utter inefficiency), nor the elite clubs of the "big" states, which are considered the most developed, wealthy and influential on the planet. Members of all these "sevens" and "twenty" were preoccupied exclusively with their own survival. Many, moreover, even attended to this question with a fair delay. The decision of Donald trump, tightly "closed" the United States from contacts with the rest of the world, caused a storm of indignation in the European Union. European Commission President Ursula von der Leyen and EU Council President Charles Michel even issued an official statement in which they strongly condemned the White House’s isolationist behavior, recalling that coronavirus is a common problem requiring “not unilateral action, but cooperation”.

Did you expect something else ?! Well, perhaps, thanks to COVID-2019, there will be one more stupid error in the world (regarding “Americans who are always ready to save Europe”). However, we will also see how the Europeans themselves will behave. How, for example, they will respond to a desperate plea for help, sounding today from Iran. The local authorities have already stated that they have formally appealed to the leadership of the International Monetary Fund with a request to provide Tehran with assistance in the amount of $ 5 billion needed to more effectively counter the spread of coronavirus in a country where more than 10 thousand people are already infected. In fact, the IMF announced its readiness to allocate funds to the countries most affected by the epidemic, using the rapid financing tool (RFI). Let's see what the real answer will be. Be that as it may, Russia today must, above all, continue to maintain the effectiveness of all, even the most stringent measures necessary to prevent an epidemic in the country. And secondly ... Preparing for life in a slightly different world than the one we knew a year or two earlier. Surely, one should take a closer look at the experience of China and draw from it the most positive aspects, those that have allowed this country to overcome the extremely difficult trials of today. Again, in the future, surely, less and less attention will be paid to various "authoritative" international structures that can only demand and give empty recommendations and not the most reasonable advice. These institutions proved their “usefulness" in full. In the significantly changed “post-viral” geopolitical reality, where each state will have to largely defend its own positions in the world, our country, if it manages to go through a pandemic without losses or with minimal losses, will have very good chances to consolidate its position and uphold own interests.
Ctrl Enter
Noticed oshЫbku Highlight text and press. Ctrl + Enter
We are
Peace enforcement operation. Russia inflicts a preemptive strike on Kiev
“The dark August night came the one whom the Ukrainians were waiting with horror”
Reporterin Yandex News
Read Reporterin Google News
2 comments
Information
Dear reader, to leave comments on the publication, you must sign in.