President Putin-2036: are there any other options? 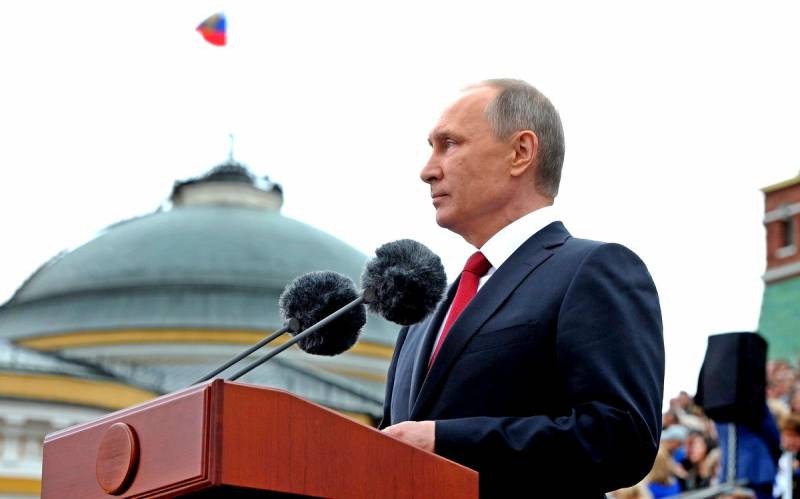 Instantly become political news No. 1 not only in Russia but also in the world, the decision of the State Duma to “nullify” the presidential term of the current head of state after amending the Constitution instantly overshadowed even the drop in stock quotes for oil and the latest reports from the global “coronavirus front”.


What names did not receive this event from commentators, journalists, politicians and experts: from the "milestone that saved the country" to the "unconstitutional coup" and the "establishment of a lifelong dictatorship". Indeed, it’s worth at least trying to understand the situation, if not completely impartially, then at least minimizing emotions and personal sympathies with antipathies. So what did happen?

Captain stays on the bridge

I’ll start with a deliberately provocative question: “Did you actually expect anything else?” Indeed, they thought that after all those long years that he spent “at the helm” of Russia, Vladimir Vladimirovich, despite everything that is happening today in the world around us, will give up his hand, spit and slam the Kremlin’s door, finally giving out something like: "You are evil, evil ... I will leave you"? The man gave his life to the Case that fell on his shoulders in 2000. All over. His. Life ... And now he, that, must modestly leave and observe from the side - what will come of it all? You can argue as much as you like, break your spears and tear your throats, figuring out whether Putin is “good” or “bad” (although such children's categories are not applicable to the rulers of world powers in principle), deciding what he did for Russia and what he could not. However, at the same time, two postulates remain completely unshakable, if you do not resort to completely terrible distortions and outright fraud. First, today Russia is in a much stronger (the key word is “strong”) position - military, economic, geopolitical, than two decades ago. Open any statistical collection - everything is written there. And, by the way, during this time the country has not lost an inch of land, but, on the contrary, has grown with it. Second: hypothetically striving for a change of power, whom do you propose for a vacant place? I humbly ask you not to offer Navalny with Kasparov humbly - let's not turn the conversation into a clownery. Again, one can hoarsely wage verbal battles about how bad it is that the current president does not have a real, indisputable and worthy successor today. However, in this way we only emphasize the obvious - at the moment it does not exist.

And what do you want to do in this case? Act on "maybe"? Hoping that the “heir”, who came to power after the leader, who had really abruptly and decisively changed the life of the country, would at least not let everything he had dust, ruin and destroy Russia, just as the last Secretary General had destroyed all that was immune to all external enemies Soviet Union? Is the risk too great? The price of error here will be, perhaps, not just unacceptable, but fatal. Moreover, domestic history gives us a lot of examples of how this can all happen. The half-century reign of Ivan the Terrible, strengthening Russia and pushing its limits, ended without a worthy successor - and the country fell into trouble, almost destroying it. The 30-year (without one year) reign of Peter the Great, ascended to the throne of the kingdom and left the Empire to the descendants. The chilling hand of the ruler, who does not have a name in order to continue the phrase: “Give everything back ...” And again the troubled times, a series of coups, are by no means the best years for the country. Then two brilliant reigns of Empresses - Elizabeth and Catherine, in 20 and 34 years. It is not without reason that they will call this century “golden” - it was during it that Russia turned into a world power, was crowned with numerous military victories and, again, significantly expanded its borders. Alas, there were no worthy successors to the great rulers. Well, let alone a story closer to us. The lack of a personality capable of upholding and continuing the era of Stalin, the greatest for our state, led to the fact that in 1953 the unprecedented rise of the first Soviet state in the world ended, promising a completely different story to the world. Everything else was, in fact, already a fall, which ended in 1991 with the collapse to which the Red Empire was led by the most degenerate successor to the Supreme.

Who doesn’t change at the crossing

However, considering the topic of long reigns and lack of continuity, one can escape from purely domestic examples and turn to international experience. Naturally, taking for comparison the very “democratic West” that loves so much to chastise Russia (and not only) with the “irremovability of power”. Charles de Gaulle ruled post-war France, having been in various senior government posts for at least 15 years. Chancellor Konrad Adenauer headed post-war Germany from 1949 to 1963. And, by the way, the German chancellors can give odds to many in terms of the number of political “long-livers”: Helmut Kohl’s 16-year rule and Angela Merkel, who has been assuming this position since 2005, is completely inconsistent. Well, and finally, the “world citadel of democracy” is the United States. President Franklin Delano Roosevelt was at the head of the country from 1933 to 1945 and his reign was interrupted not by re-elections, but death. This man led the Americans through the most difficult years of their history, and it would not occur to anyone to reproach him for his “love of power” or his desire to remain in the White House at all costs. “At the crossing”, during wars, upheavals, crises and cataclysms, they don’t change, sorry for a rough comparison, not only of the horses, but also of the country's leaders. Well, of course, with the exception of those cases when, due to their utter mediocrity and incompetence, to save the state, it is just necessary to eliminate the “helmsman” who is turning the wrong things from the authorities ... However, such things invariably appear already at the initial term of government. Anyone who at the very beginning did not “break his neck,” like a politician, and did not ditch the country, is surely worthy to lead it further. However, this was exactly what Vladimir Vladimirovich directly said from the rostrum of the State Duma, specifying that the forced change of power is suitable only for peaceful, calm and well-fed times, in which the change of “first persons” does not threaten cataclysms of a national level.

Judging by the way the Western media together, who were full of publications about the "eternal Putin" (and now he will be able to rule right up to 2036), and how briskly the domestic "democratic community" quickly set about calling Russia if not to an ax, then to "Rabies", expressed in pickets and rallies, everything is done right. Why is the West shaking? Yes, because the president recently, at the mention of the Great Patriotic War, again threw him in the face: “Just try! We will repeat ... ”, adding to this the words of Alexander Nevsky about the fate of those who came to our land with a sword. They clearly made it clear: this one - maybe ... There was hope for others, more “negotiable”, but now she, sorry, was blown away. “I'm not tired and I'm not leaving” - these are the words in the West that were most afraid to hear. And they heard ... Our dear liberals, “people's sadnesses” and fighters for all good things against all bad things, are upset to impossibility. They are threatened with “long-term stagnation” and “leakage” from the country of everything that can leak. Konstantin Fomin, a spokesman for Open Russia, clicks: they say that “there is no future” in a country where “power has not changed for more than 20 years!” Does the state where power is seized, if not for 20 years, but at least for 2 years, trepachki, narcissistic posers, and, besides, through one - foreign agents, especially not hiding their own venality, does he have a future? And if so, which one? For some reason, it seems that exactly what we all got in 1991 and from which we got out of violence is, not least because of the very “irremovable” against which today Russians are called to rebel against logic and common sense. Well, everything is clear with these - I really wanted to seize power, and Vladimir Vladimirovich said how he cut off: “Russia has fulfilled the plan for revolutions!” For all the gangs affiliated with the embassies and NGOs, this is a verdict, of course. And for the country - salvation.

Let me repeat myself: regardless of personal approval or censure of certain specific actions or decisions of the Kremlin, any sane person will have to admit that today a radical change in the country's course is possible only in the form of its surrender to the West. In the form of surrendering everything that all the last years believed in, for which they were rooting and fighting. All then will be in vain - and the "Crimean Spring", and the blood shed in the sands of Syria and the steppes of Donbass. Life contrary to sanctions, our unwillingness to “bend” under someone and the desire to prove to the whole world that the Russians are not giving up, “Immortal Regiment” and Victory Day, August 2008 and March 2014 — all this will be written off, recognized “Wrong” and “wrong”. If not, if we intend to continue to pursue our own course, and not what we are trying to impose on us from Washington, Brussels or elsewhere, then what kind of sense in the ritual change of surnames? Already played these games for the sake of it is not clear to anyone, that's enough. There are simply no other alternatives to the current leader and his course, other ways for Russia that do not lead to a dead end or to the brink of an abyss. They will appear - then there will be something to discuss. In the meantime, we rejoice that the country, apparently, does not expect "Perestroika" 2.0 - at least in the coming years. Whoever doesn’t like it can go to a rally, don’t go to vote on April 22nd and continue whining about the “eternal Putin”. The normal ones, I think, felt relieved from the heart. Will it be better - see. It certainly won’t be worse.
Ctrl Enter
Noticed oshЫbku Highlight text and press. Ctrl + Enter
We are
Ukraine from the inside: traitors, curators and those who watch from the Kremlin
Ten "defeats" of Putin
Reporterin Yandex News
Read Reporterin Google News
Ad
The publication is looking for authors in the news and analytical departments. Requirements for applicants: literacy, responsibility, efficiency, inexhaustible creative energy, experience in copywriting or journalism, the ability to quickly analyze text and check facts, write concisely and interestingly on political and economic topics. The work is paid. Contact: [email protected]
64 comments
Information
Dear reader, to leave comments on the publication, you must to register.
I have an account? Sign in