Lukashenko has chosen his own path: from integration with the Russian Federation - to completely abandon it 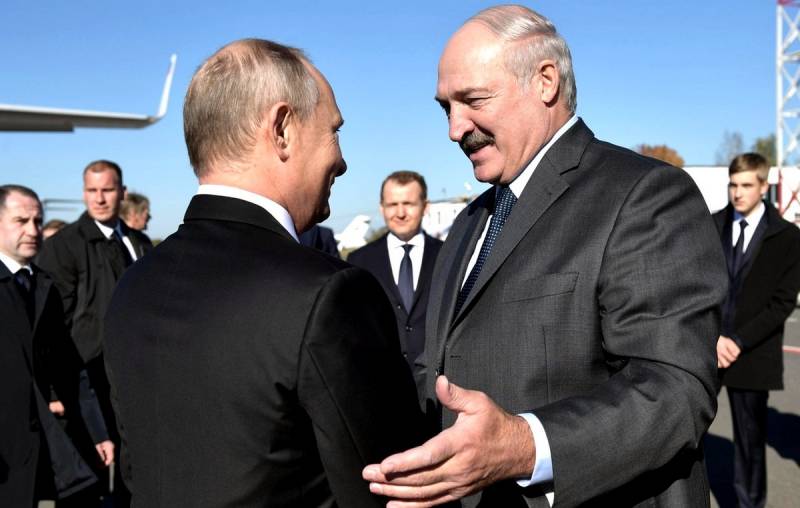 The statement that Belarus ceases all processes associated with deepening integration with our country, made last week by the head of the Foreign Ministry there, Vladimir Makei, can hardly be called sensational or simply unexpected. To that, in fact, everything went ...


However, it is worth asking another question: it is possible that Minsk is doing so well that at the current stage it can very well afford to break off partnerships with Moscow and embark on "independent sailing" - either towards the West, or somewhere else ? Not at all - in reality, the situation of our neighbors can be characterized in exactly the opposite way. “Pushing” with their hands and feet from the Union State with Russia, Belarus is heading for collapse. At least - to the economic.

Did you call the roasted rooster?

Speaking about the "senselessness" of further joint work on integration "road maps", the head of the Belarusian diplomacy clearly defined the "stumbling block" on the rapprochement between Minsk and Moscow: "first we need to resolve the issue of oil supplies", and then "we will continue to think." It sounds nice at all: you are energy carriers to us on the most favorable conditions, and we will “think about” it. Obviously, what additional claims and requirements should be put forward ... As of early March, the chairman of the Belneftekhim concern Andrei Rybakov complained that he would agree with large suppliers of Russian "black gold" on the terms on which the concern " calculated, "does not succeed. Negotiations are ongoing - but no more. As far as it is known at the moment, 200 thousand tons of oil for Belneftekhim this month will be delivered by five small domestic companies that agreed to work without a traditional bonus. Another 300 thousand tons will be provided by Safmar. However, for Belarusian refineries, accustomed to consume Russian raw materials for a couple of tens of millions of tons per year, all this is nothing more than a drop in the bucket. Other “alternative deliveries” from Norway, Ukraine, Azerbaijan, estimated not even in hundreds, but in tens of thousands of tons, look completely ridiculous. At the same time, from March 1, 2020, Minsk increased the excise tax rates on gasoline and diesel fuel by 4 times, and at the same time introduced a reduction factor for its own refineries in the amount of 0,25. Against whom this innovation is directed, it is understandable: today, the retail market of the Russian Lukoil, Gazpromneft, Rosneft and Tatneft, which account for one fifth of the gas stations in the country, operates on the Belarusian market. Here they are marked on them ...

However, this innovation fades before the "creative" proposed for the fight against "dependence on Russian energy sources" personally by Alexander Lukashenko at a meeting of the country's Council of Ministers. According to the president’s bright and figurative expression, “they waited with oil until the roasted rooster pecked to a certain place.” However, the wise and perspicacious "dad" sees a way out of the situation! Electricity will save Belarus! Alexander G. clearly outlined the task: "in connection with the construction of a nuclear power plant, to ensure that electricity for vehicles is cheaper than diesel and gasoline." According to the head of state, this will lead to the fact that "people will be happy to purchase electric vehicles." Note - they will not just buy, but with pleasure! Guardian father. Elon Musk applauds, at times brushing away a mean male tear, Greta Tunberg beats in ecstasy ... To begin with, as far as is known, in the capital they plan to get rid of every single bus (today there are more than a thousand, about the same number of Minsk transporters planned to buy literally in last year) by making municipal transport fully electric. But will this save the situation and will Belarusians want to transfer to wildly expensive electric cars in a fit of ecological patriotism? And most importantly - how much time and additional investments will be required? Especially considering that, crucifying about the upcoming "electrification of the entire country’s transport", the president has already promised tax benefits not only to electric car manufacturers, but also to their future owners ... It is unlikely that Alexander Grigoryevich, clearly sensing the flapping of the wings of the same fried rooster can give a clear answer to all these questions. A mean-spirited bird, meanwhile, is declining - business in the economy countries are getting worse and worse every month of the new year.

The foreign exchange reserve of Belarus, which at the beginning of this year amounted to nearly 9 and a half billion dollars in equivalent, has so far reduced to 8.8 billion. For some three months Minsk, having distributed the most burning debts, lost about 600 million dollars from gold reserves. Not a catastrophe, of course, but the trend is clearly negative, especially in light of the fact that, according to figures voiced by the country's deputy finance minister Andrei Belkovets, this year Belarus will have to pay $ 3 and a half billion in loans. However, if the problems were limited only to this, it would be half the trouble. According to Belstat, in January 2020, the country's GDP fell by almost 2% compared to the same period last year. This is caused by a decrease in industrial production by as much as 5.8%, the cause of which, first of all, was the problem with the supply of energy from Russia. As a result, oil refining “collapsed” by more than 40%, chemical industry - by a quarter. However, as far as it is known, problems have arisen not only at oil refineries - falls also occur in the mining and processing industries, such “pillars” of the Belarusian economy as MAZ and Belshina are going to send their workers on forced holidays. A number of production lines have already been stopped at the last of the enterprises. This was allegedly done for a scheduled repair, but there is evidence that the real reason is the problems with the sale of the plant's products in Russia. What can I say? It was not necessary to quarrel ... So far, more or less "afloat" the country's economy is kept only by agriculture, whose volumes are growing.

The attempt by the Belarusian Ministry of Finance to make regular external borrowings by placing on the London Stock Exchange (LSE) Eurobonds denominated in US dollars maturing in 2035 and Eurobonds denominated in euros maturing in 2026 or 2028 ended in failure. According to the Ministry of Finance, the idea had to be abandoned so far, because of the epidemic of the coronavirus, the international financial markets have “gone crazy.” When the stock markets "come to their senses" to predict now, perhaps even a seer of the level of Nostradamus would not have taken it. At the same time, Minsk wants to maximally open its own securities market, the state of which last year was defined by the word “stagnation”, making it accessible to almost everyone and allowing securities of non-resident issuers to enter it. In particular, the International Investment Bank, the European Investment Bank, the Eurasian Development Bank, the International Finance Corporation, the European Bank for Reconstruction and Development are invited to place their securities on the Belarusian market. All this looks like desperate attempts to follow the slogan of the unforgettable Ostap Bender: “Abroad will help us!” But it’s unlikely that something worthwhile will come out of all this. For example, the visit of the International Monetary Fund’s survey mission to Minsk scheduled for late March is canceled. The official reason is an outbreak of coronavirus, but the wording “postponed indefinitely”, given the fact that the last time a similar mission worked in Belarus two years ago, does not sound very encouraging. Most likely, the desire of Minsk to join the World Trade Organization, which, according to the assurances of the Belarusian government, was supposed to happen at the WTO ministerial conference in Nur Sultan this summer, will also remain unfulfilled. However, this is another story ...

Unresolved issues with such “complex” and intractable members as the EU, Canada, the USA, Ukraine, Brazil, and Australia serve as an obstacle to Belarus access to the “World Trade Club”. The problem lies largely in the fact that they require Minsk to take a number of decisions on customs duties, which will go completely against the economic policies EAEU, of which the country is already a member. The Belarusian side quite rightly believes that if these requirements are agreed, its goods will have problems on the border with Russia, which will lead to losses incomparable with the hypothetical benefits of membership in the WTO. Fortunately, they still understand the “priority nature” of the Russian market for all of their products (in any case, this opinion was voiced recently by the First Deputy Foreign Minister of the country Andrei Yevdochenko) and, in contrast to the same “non-fallow” one, nevertheless they try to act “with caution”, despite all the aspirations to strengthen the “Western vector” in its own policy, including economic. However, not all representatives of Minsk show such prudence. Thus, the Prime Minister of Belarus Sergey Rumas made a rather strange statement, in which he expressed hope that the record drop in oil prices “could well help to reach an agreement with Russia on more favorable conditions for the supply of energy resources.” It turns out interesting - to whom is war, and to whom is mother dear ?! It is unlikely that such "free" moods, moreover, looking, to put it mildly, not too fraternal and good-neighborly, are justified. “Attractions of unprecedented generosity” for Minsk ended, most likely, once and for all, and the sooner they come to understand this truth there, the better it will be for Belarus itself.

Most likely, only those countries that will receive support either from international financial institutions (but this is definitely not about Minsk) or from friendly states with much more powerful countries will be able to survive in the inexorably rolling “ninth shaft” crisis that has been unprecedented over the past decades. economies. For Belarus, Russia is the only such potential ally. The European Union, if it will save anyone (which is actually quite problematic in the current conditions), then only its own members, and even then, perhaps, not all of them. The United States in the upcoming discord clearly acts on the principle: "the worse, the better." Using this opportunity, they intend to defend, as always, exclusively their own interests. By refusing flatly to integrate with Russia, Belarus runs the risk of being without a reliable “shoulder” precisely at that crucial moment, when not only it, but the entire world economy will burst at the seams. It can hardly be called a balanced and far-sighted policy.
Ctrl Enter
Noticed oshЫbku Highlight text and press. Ctrl + Enter
We are
Peace enforcement operation. Russia inflicts a preemptive strike on Kiev
“The dark August night came the one whom the Ukrainians were waiting with horror”
Reporterin Yandex News
Read Reporterin Google News
Ad
The publication is looking for authors in the news and analytical departments. Requirements for applicants: literacy, responsibility, efficiency, inexhaustible creative energy, experience in copywriting or journalism, the ability to quickly analyze text and check facts, write concisely and interestingly on political and economic topics. The work is paid. Contact: [email protected]
12 comments
Information
Dear reader, to leave comments on the publication, you must to register.
I have an account? Sign in