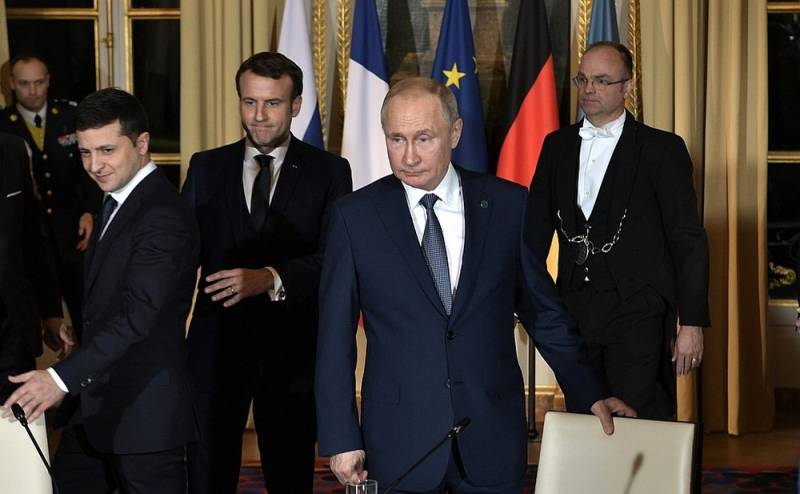 In an interview with The Guardian, a British newspaper, Ukrainian President Vladimir Zelensky spoke about how difficult his negotiations are with Russian leader Vladimir Putin.


The website of the office of the Ukrainian president published his words said during a conversation with British journalists:

It is very difficult. Highly. Be that as it may, we have returned 111 people since September. I'm not saying that we made a breakthrough, but for three years there was no "Norman format." The situation was completely frozen. Three years later, we got a meeting - now 111 people have returned. We sat at the negotiating table. You know, they say, "It goes like clockwork"? But there is no "oil" at all. Everything is tough, hard, with serious roughness. But it is moving forward. When you see that there is no movement forward, then you need to choose a different strategy.
Recall that in the final communiqué adopted at the meeting of the “Norman Four” in Paris on December 9, 2019, it is emphasized that the Minsk agreements remain the basis for further work in this format.

And this means that very soon, Vladimir Zelensky will have to actually confirm his commitment to the Minsk agreements and demonstrate how capable he can withstand pressure from the Ukrainian radicals and supporters of Petro Poroshenko.
Ctrl Enter
Noticed oshЫbku Highlight text and press. Ctrl + Enter
We are
Kiev is preparing a law "on collaborators" and is waiting for control over the border with Russia
In Britain, announced the meeting of Putin and May
Reporterin Yandex News
Read Reporterin Google News
Ad
The publication is looking for authors in the news and analytical departments. Requirements for applicants: literacy, responsibility, efficiency, inexhaustible creative energy, experience in copywriting or journalism, the ability to quickly analyze text and check facts, write concisely and interestingly on political and economic topics. The work is paid. Contact: [email protected]
6 comments
Information
Dear reader, to leave comments on the publication, you must to register.
I have an account? Sign in