There is no one to fight the virus: Russia runs the risk of contracting COVID-2019 from Ukraine 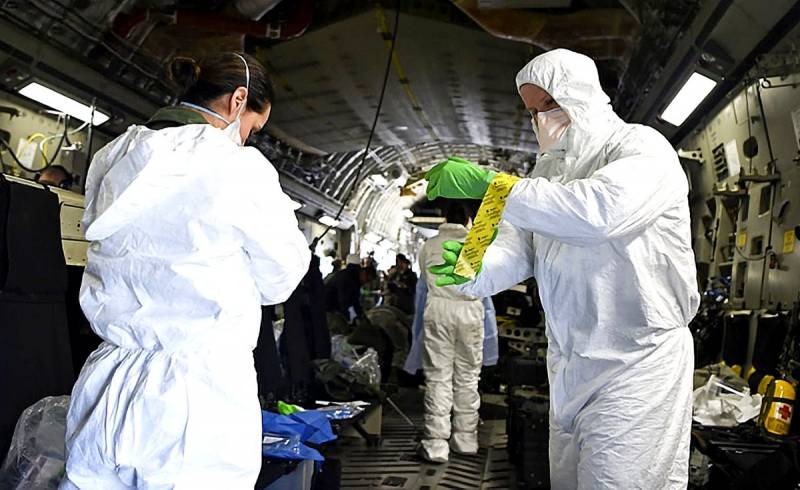 Today, the situation with the spread of the COVID-2019 virus that has hit the world in Russia can be described not just as stable and controlled, but almost as exemplary. Only 6 officially confirmed cases, two recovered, not a single dead ... Among more than 80 countries in which, in addition to its "homeland", China, the coronavirus has already shown itself, far from many can boast of such statistics. A huge positive role was played by timely and tough measures to block the country's borders, especially in the Far East, the ban on immigrants from the Middle Kingdom to enter Russia, as well as a clearly established system for checking foreign visitors from “epidemiologically unsuccessful” regions.


However, today in no case can we ignore another danger - an infection, the “offensive” of which was expected from a completely different perspective, can rush to us from the West. Specifically - from the territory of neighboring Ukraine. The likelihood of such a scenario is more than significant, and it is he who poses a greater threat to Russia than one that has already been successfully localized in the “Chinese direction”.

The gates are not open for the virus.

Alas, this statement is by no means an exaggeration, and even more so, "anti-Ukrainian propaganda." The complete insecurity of their country against the imminent threat is recognized by the Ukrainians themselves. As a matter of fact, “non-fallow” was doomed from the very moment when it became clear that Italy was one of the world centers for the spread of deadly infection. It is in this country that Ukrainian “migrant workers” traditionally go to work and from there they regularly arrive “on a visit” to their homes - mainly to Western Ukraine. What figures are we talking about? Official statistics do not exist as such, but the approximate number is not so difficult to calculate. About 250 thousand immigrants from the "non-down", located on Italian soil, statements were made back in 2015. Since then, the number of “zarobitchan” people fleeing to Ukraine’s eyes has grown exponentially, and even according to the godlessly underestimated official figures of the local Ministry of Finance, as of the middle of last year, there were at least 3.2 million people (or about 20% of working age) population of the country). Today, we can probably talk about several hundred thousand Ukrainians who find themselves in one of the main epicenters of the epidemic. Another point that gives some idea of ​​the extent of migration along the Ukrainian-Italian route: at least 500 minibuses from the Apennine Peninsula, crowded with just those who were there to work, enter the country weekly. This is without taking into account the air traffic with Italy, which, as far as is known, nobody thinks to interrupt in Kiev.

Because of this, it is not surprising that the first reliably confirmed case of coronavirus infection in Ukraine was recorded in Transcarpathia, Chernivtsi and just a local resident who came from Italy. However, the question remains: how many infected citizens have already entered the country today? There is quite documentary evidence that in the days when the epidemic in Italy was already spreading like a wildfire, no one even tried to measure the temperature of the passengers of flights arriving in Kiev from Rome and Milan. Yes, and at border checkpoints through which “beads” flow to the country, where almost every second theoretically can be infected, border guards did not “scratch” it right away even after receiving the appropriate commands from Kiev. Some argue that they now carry out checks “through the sleeves”, because of the protective equipment provided, in the best case, with medical masks of not the best quality. There is one more point that has a purely Ukrainian specificity: the wild history of Novy Sanzhar almost repeated in Chernivtsi: the family of a citizen hospitalized with coronavirus had to be taken out of the house in a hurried manner under guard until their own neighbors dealt with it. A new concept has already appeared in Ukraine: “coronabulling,” which in the European manner denotes the persecution of patients or those who are suspected of carrying the infection. In Lviv, today, local residents sweep food from shelves, store tires for local-level Korona-Maidans, for which the local police are already preparing, in the battle to save sick fellow citizens from the hands of brutalized crowds that are not torn at all. What is this talking about? Yes, the fact that Ukrainians who are really sick will prefer not to ask for help at all, hoping that they will "carry over" or "manage" and are justifiably afraid of reprisal. And in the meantime they will infect everyone around them ...

There is nobody and nothing to fight the virus

However, a very big question is: can Ukrainian doctors even help those who come to them for salvation? The latest statistics show the level of local medicine and its ability to resist viral diseases: from February 24 to March 1 in Ukraine, 6 people died from the most common flu, 4 of which are children. The number of infected during this period exceeded 210 thousand. In total, since the beginning of the epidemiological season in the “non-fallow” flu, 54 have been killed. Yes, no COVID-2019 is needed here! It is quite natural, given that approximately 1% of the population is vaccinated against influenza in the country (30% on average in Europe). Medicine in post-Maidan Ukraine was defeated and destroyed more clearly than Kiev after the Batu invasion. Doctors on house calls no longer leave. Consequently, a patient with even the most severe symptoms will have to go to the "family doctor" clinic (there are no others) and infect as many people as there will be by drogue. There are three special devices for lung oxygenation (a salvage procedure for severe forms of coronavirus) throughout the country, in the capital’s clinics. A day's stay at them at the new, "European" prices of Ukrainian medicine cost from 3 to 5 thousand euros. There are no BSL-3 isolation boxes needed to keep people infected with COVID-2019 at all. Not a single one! There are not enough special suits for doctors, the so-called “anti-plague”, which, at best, have three dozen for each area, with the need for three suits for a doctor per shift. What are the costumes - the most ordinary masks have disappeared in the country. Moreover, here again the exceptional specificity of the "uncovered" made itself felt ...

Good would be the smart dealers who began to buy them in warehouses at the very beginning of the coronavirus hype intended only to engage in speculation, earning on compatriots! This also happens - in some Ukrainian online stores for a pack of masks worth 50 hryvnias today they smash at least a thousand. However, first of all, enterprising speculators established the export of this product, which is extremely demanded today throughout the world, beyond the borders of its own country - to China itself! To prohibit the export of much-needed protective equipment, as was done, for example, in Kazakhstan, the Ukrainian government did not even think about it - either in share, or just anyway. Well, and finally, the most terrifying: in Ukraine there are no bodies responsible for quarantine and anti-epidemic measures! From the word “completely” ... After the “Euromaidan” the State Sanitary and Epidemiological Service was liquidated, the Veterinary Police Department for conducting quarantine veterinary measures of the Ministry of the Interior was dispersed. Not a single SES in the whole country. In the light of today's events, the status of the chief sanitary doctor of Ukraine was assigned to the Deputy Minister of Health of the country Viktor Lyashko. "Barrier" is a contagion that cannot be defeated by the consolidated efforts of doctors, military and police of entire countries from one official ... This is the whole of the current "untouched". However, even with the most ardent desire of Kiev to revive the necessary structures there is simply impossible - there are practically no doctors and epidemiologists left in the country. They are not even prepared by medical universities. Complete hopelessness.

The situation in Novy Sanzhary fully showed how events are likely to develop in a country that is absolutely unable to cope even with much less serious challenges. Waiting should be riots, chaos and anarchy, which may well reign on the territory of entire regions of Ukraine. Any attempts to establish quarantine restrictions will surely meet fierce resistance from Ukrainians who are used to taking their throats and burning tires, and the liquid "forces" of the police that are completely uncontrolled are unlikely to deter crowds of refugees and pogromists even with the support of the same National Guard. Russia today should be preparing for just such a scenario - fortunately, a wave of the epidemic will most likely spread along the “non-fallow” from West to East and there will be time to react as harshly as possible. In the event of the penetration of COVID-2019 into the Eastern and Southeastern regions of Ukraine, the occurrence of an epidemic there and the associated social disasters, a wave of refugees will almost inevitably flood the Russian borders. Moreover, the residents there will have nowhere else to escape from the impending disaster. However, even now, visitors from the “non-winter”, especially from its western regions, should pay special attention to our border guards and doctors - away from sin. And, by the way, I would advise being especially vigilant to those who are on guard of the borders of the LPR and the DPR - you never mind. And just do not blame the "thickening of colors" and "exaggeration"! Remember those posts in Ukrainian social networks, whose authors during the Novosanzharsky madness called for "dumping compatriots taken out of Wuhan to Donbass". Some particularly ardent "patriots" may well try to use the infection as a biological weapon against the Republics.

God forbid that this forecast does not materialize. Some doctors claim that with the onset of warm and sunny weather, the virus can decline by itself. Let's hope that the epidemic never reaches our country - neither from the East, nor from the West. And, nevertheless, hoping for the best, you need to be prepared for everything.
Ctrl Enter
Noticed oshЫbku Highlight text and press. Ctrl + Enter
We are
US and Coronavirus: Three Uncomfortable Questions
They lied to us for 70 years? Who was Lenin really?
Reporterin Yandex News
Read Reporterin Google News
Ad
The publication is looking for authors in the news and analytical departments. Requirements for applicants: literacy, responsibility, efficiency, inexhaustible creative energy, experience in copywriting or journalism, the ability to quickly analyze text and check facts, write concisely and interestingly on political and economic topics. The work is paid. Contact: [email protected]
9 comments
Information
Dear reader, to leave comments on the publication, you must to register.
I have an account? Sign in