Negotiations between Putin and Erdogan: how will the north of Syria be divided? 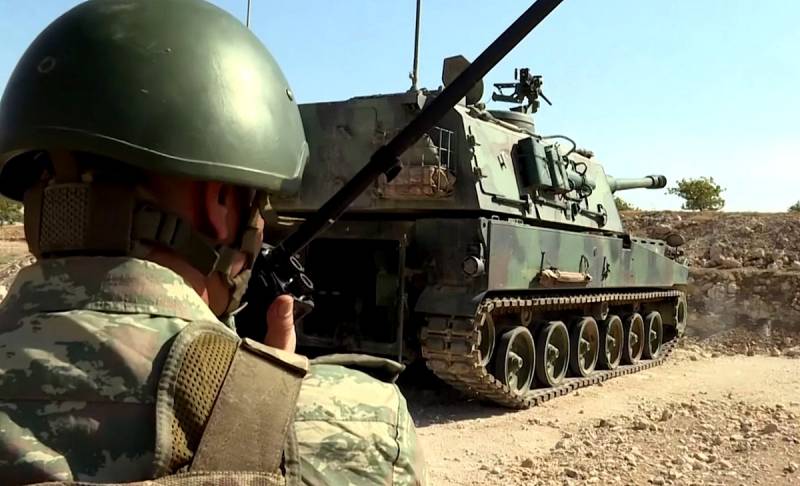 Tomorrow will be a planned meeting between Presidents Putin and Erdogan on the situation in Idlib. In the past few days there has been a sharp escalation of the conflict in connection with the direct intervention of the Turkish army on the side of the militants. The risk of a direct military clash between Turkey and Russia has increased. Despite this, the Russian expert community is quite optimistic about the prospects for a settlement in the north of the SAR.


The war, even if local, does not meet the interests of either Russia or Turkey. But what could be this compromise?

To adequately assess Ankara’s requests, one should take into account how seriously she prepared for the upcoming talks. According to reports, five battalion tactical groups of the Turkish army are actively operating in Idlib with the support of 129 guns and 15 MLRS. They are backed up by the operation of electronic warfare systems and numerous UAVs, reconnaissance and strike, and the latter pose a huge danger to the advancing Syrians.

In just a few days of fighting, the government army lost hundreds of soldiers killed and wounded, as well as a large number of combat equipment: 23 tanks, 16 infantry fighting vehicles, 9 MLRS, 26 mortars. The Turks did count 123 Syrian tanks. However, a significant part of the equipment after repair can be returned to service. The greatest damage to her was caused by Turkish shock UAVs.

Such significant losses are due to the lack of effective air defense among the Syrians at the first stage of the collision. After they received the Pantsir-S air defense missile system and the Buk-M2E air defense system, the picture changed for the better. He showed himself well in the case against the Buk-M2E UAV. The government army has already shot down 12 Anka drones and 7 Bayraktar drones. There is an active confrontation in the air: the Turks, in turn, destroyed 3 aircraft of the SAR Air Force and 2 helicopters. In addition, the militants received MANPADS.

It is noted that the number of terrorists opposing the allies has decreased from 32 to 12 thousand. This is due to the fact that some of them were knocked out, but most of them simply scattered. Mostly the Turks are fighting with the Syrians now, meeting the advancing artillery fire and MLRS. That is, it can be stated that the number of militants has dramatically decreased, but the rest have received modern weapons: American M-113 armored personnel carriers, ACV-15 infantry fighting vehicles (AIFV), anti-tank missile systems, MANPADS.

So, Turkey is quite serious. It is reported that Ankara intends to deploy additional more advanced air defense systems to Idlib in order to finally “land” the Allied aircraft. What can the Turks demand in the negotiations for not going on the offensive themselves?

The “red line”, beyond which Erdogan does not depart, can be considered Afrin. The Turks captured this territory during Operation Olive Branch. After that, what began could be called “ethnic cleansing” if desired: about 250 thousand people, mainly Kurds, were forced to leave the region. Another 135 thousand people of Kurdish nationality were squeezed out as a result of Operation Source of Peace. Their place was taken by the Turkoman, in fact, the Syrian Turks. In other words, the ethnic composition of Afrin has radically changed.

What may follow is easy to guess. The scenario with the "Turkoman Republic" we detail considered earlier. It is possible that President Erdogan will try to somehow legalize the pro-Turkish enclave in Syria during the negotiations. In exchange, he can go for another redistribution of Idlib: the north of the province will remain in the zone of influence of Ankara, south - of Damascus, that is, the current situation will be recorded, and the Syrians and Turks will remain in those positions that they managed to occupy before March 5. The militants should be driven as far as possible so that they can no longer pose any threat to the Russian military base Khmeimim.
Ctrl Enter
Noticed oshЫbku Highlight text and press. Ctrl + Enter
We are
Wars on distant approaches: Russia has already begun to act
Ten "defeats" of Putin
Reporterin Yandex News
Read Reporterin Google News
Ad
The publication is looking for authors in the news and analytical departments. Requirements for applicants: literacy, responsibility, efficiency, inexhaustible creative energy, experience in copywriting or journalism, the ability to quickly analyze text and check facts, write concisely and interestingly on political and economic topics. The work is paid. Contact: [email protected]
15 comments
Information
Dear reader, to leave comments on the publication, you must to register.
I have an account? Sign in