Manifesto of a complete break with the West: why Putin is changing the Constitution 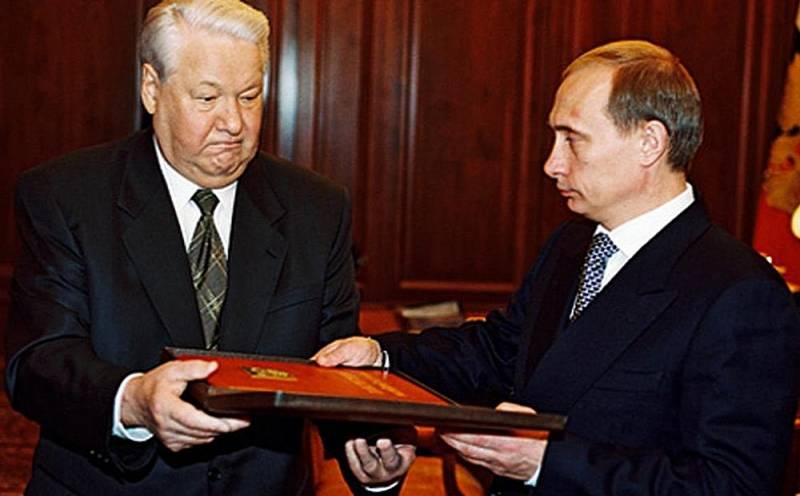 At 18 p.m. Moscow time on March 2 of this year, the acceptance of amendments to the second reading of the bill amending the Russian Constitution ended. Of course, the most significant among them is a package of proposals from the one who, in fact, acted as the initiator of the constitutional reform - President Vladimir Putin of the country. All his ideas, set out in a very voluminous (two dozen pages) document, have yet to undergo wide discussion and pass the test of a popular vote on April 22, but the main conclusions can be drawn now.


The vision presented by the leader of the state for the changes necessary for the basic law of Russia, means, first of all, the final rejection of attempts to build "friendly relations" with the West. At a minimum, to achieve such a goal at all costs. What exactly indicates this?

For our Soviet motherland! With God...

Among the president’s ideas right now, immediately after they were publicized, which criticized both abroad and within the country, one can safely attribute the most irritants to Putin’s desire to enshrine in the Constitution a special mention of “faith in God,” as one of the main ideals “transmitted us ancestors ”, the introduction of the concept of“ state-forming people ”(naturally, Russian, not“ Russian ”) and, perhaps, an indication of the“ thousand-year history ”of our country, the direct continuity of the current state from both the Russian Empire and Soyu and of Soviet Socialist Republics. It may seem to some that these novelties include contradictory and even incompatible moments, however, only one who does not know the essence of Russian history and does not want to really delve into its meaning, content with miserable ideological cliches, can think so. Finally, the president’s desire to put an end to the opposition between the Soviet and “non-Soviet” periods of development of our country, following which some people try to present them almost as antagonistic, should be recognized as more than correct. Nothing but new speculations leading to the contention and division of the Russian people into "white" and "red", "monarchists" and "Stalinists", and so on, it does not bear us. Everything is empty and far-fetched. The best confirmation of my opinion is photographs of heroes on whose breasts the St. George Crosses and the Order of the Red Star and the Red Banner perfectly coexisted. This is our true story and our true pride. The fact that the Constitution was proposed to introduce a provision on the inadmissibility of attempts to distort the first and belittle the second is simply a recognition of a long overdue need.

What is characteristic is that the critics of the announced changes that were immediately announced cannot clearly explain and, especially, justify their own rejection, completely. Thus, the Chairman of the Council of Muftis of Russia Ravil Gainutdin and the Mufti of Tatarstan Kamil Samigullin, who expressed their own disagreement, stated that “representatives of different faiths have different perceptions of the concept of God.” So what?! Someone is going to forbid them? Note that this is not about asserting the primacy of any particular religion. Orthodoxy, which is the most significant denomination in the state, is not mentioned at all. It would seem that representatives of any clergy should only rejoice at such amendments, but no - they are still unhappy. Where is the logic here? And on the other hand, Dmitry Peskov has already to explain to the journalists, terribly worried about “how they will treat the atheists after that”, that Russia is not going to depart from the principles of a secular state and force someone into any kind of church. Nevertheless, the mention of faith, as the main spiritual value of our people, is necessary - otherwise moving to the future along the path of secularization that the “civilized world” has long and firmly embarked on, one can achieve a lot. In Iceland, for example, last year the parliament took, and equated religion with ... weapons of mass destruction! And in many countries of Western Europe, today unconditionally surrendering to crowds of Muslim migrants, it all started with the fact that empty churches began to turn into “art objects” one after another, or even go to demolition. Atheists will not be forced to baptize, but at least some barrier to destructive unbelief must be set.

By the way, no less, and even much more than the mention of the fundamental law of faith, the religious leaders mentioned above are concerned about the words about the “nation-forming people”: “What is this news? We are all Russians! ” Who argues ... But one cannot argue with the fact that more than 80% of the country's population are just Russians. No one is going to prescribe any special rights or privileged provisions regarding them in the Constitution, however, a certain clearly defined status for a people that for centuries has borne the bulk of the worries and efforts to build and protect a common house, you see, is more than appropriate. In the same way, as well as amendments regarding the inadmissibility of attempts to alienate any territories of Russia, as well as calls for such actions. This is all called a statist approach. Moreover, it is perfectly clear that if such a package of constitutional amendments is adopted, it will be possible to speak with absolute confidence about the complete departure of our country from decades of “liberal democratic” and so-called “universal human values” imposed on it. The consolidation at the level of the country's main law of the positions of traditionalism, healthy conservatism, and those spiritual and moral ideals that have been professed in it for centuries - this is the main thing that Russia can and must contrast the West today with its latest attempts to weaken and destroy it. The whole history of the Fatherland is more than obvious: we are not afraid of external enemies as much as internal confusion. It is worth starting to stagger to the fundamental foundations - and that's all, wait for the troubles, fratricide, foreign invasion and decay. Only in the last century it was like this twice - in 1917, and in 1991.

Having adopted the updated Constitution, our country will declare to the whole world that in the future it intends to be guided exclusively by its interests, values ​​and ideals, and not imposed, “proposed” or “recommended” by those whose main dream and goal is to disappear from this world both Russia and Russian. How much indignation will be on this occasion, how much anger! By the way, it has already begun - clinging to the most outrageous amendment from the point of view of the “common people”, recognizing marriage as an exclusively union of a man and a woman, they have gone into all the grave main “shouts” of our “friends”. Air Force, Deutsche Welle, and beyond, on all the well-known list. How can they agree with the similar, if last year the European Commission proudly reported that the "level of support" of various perverts in the Old World had already reached an average of 76%? In Sweden and the Netherlands, this is 97-98% altogether ... What about the White House administration, which again last year announced with great fanfare the start of a “global campaign for LGBT rights” ?! My answer is simple - to roll into your sodomite hell exclusively on your own. Without us, without Russians. Well, I don’t wish that in our country children would receive LGBT education lessons in schools, like in Scotland or, excuse me for frankness, masturbation, like it happens in primary schools in the British county of Warwickshire! Or to be taken on “educational excursions” to a zoo, such as London, where a couple of crazy penguins were declared “feathered representatives of the gay community”. Chur us from this, chur! What such disgusting can do with people who once shook half the world is perfectly demonstrated by the example of the Germans - half a million people gather there for gay parades in Berlin and 10 thousand per year of “perverse” marriages are registered. But only in the Bundeswehr there is absolutely no one to serve. And to those who “lost their shores” and behave like conquerors, “give the guests of the country” a shortcut - all the more so.

It is clear that much more anger in the West will not be caused by those innovations that “infringe upon the rights” of various perverts, but by basic, fundamental things, such as the principle of the supremacy of Russian law over the “universal” one. This is much more serious. There, even the UN in its desire to curry favor with the masters from Washington, who seem to have finally turned this completely degraded “office” into their own mouthpiece, reached the announcement of our pilots, who are now fighting in Idlib with terrorists, “war criminals”. That is, the laws and rules of the war are violated by our pilots, without whose heroism and dedicated military work ISIS would freely frolic in the Middle East to this day, and not the Turkish thugs who invaded uninvited into the territory of a sovereign state just to save and support these same terrorists? ! Here it is in all its glory - the "logic" of the West, its "laws" and "values", which we are invited to strictly follow. Will we lose something by refusing to do this? It is extremely doubtful. One of these days, one of the official representatives of the United States stated once again that his country would never recognize Crimea as Russian. Consequently, sanctions and other anti-Russian demarches will continue. The fact that Russia from now on, and I really want to believe, forever, rejects such claims, choosing its own path, its truth and its faith, gives us all hope that really something important, cardinally important will change in the life of the country. It will change not in words but in deeds.

No one says that the next step aimed at maximizing distance from the West will not be painful, will not lead to certain consequences that not everyone will like. However, the only other way available to us today besides this is complete surrender and surrender of national interests. The situation over the past 5-6 years has come to what it has come to, and the third is simply no longer given. The Kremlin, it seems, is fully aware of this and made the corresponding choice. April 22 to confirm or deny it will be the whole people of Russia.
Ctrl Enter
Noticed oshЫbku Highlight text and press. Ctrl + Enter
We are
Putin's departure: how to prevent the collapse of Russia's foreign policy
Ten "defeats" of Putin
Reporterin Yandex News
Read Reporterin Google News
Ad
The publication is looking for authors in the news and analytical departments. Requirements for applicants: literacy, responsibility, efficiency, inexhaustible creative energy, experience in copywriting or journalism, the ability to quickly analyze text and check facts, write concisely and interestingly on political and economic topics. The work is paid. Contact: [email protected]
43 comments
Information
Dear reader, to leave comments on the publication, you must to register.
I have an account? Sign in