Russia, Turkey and the United States: the parties are building up forces off the coast of Syria 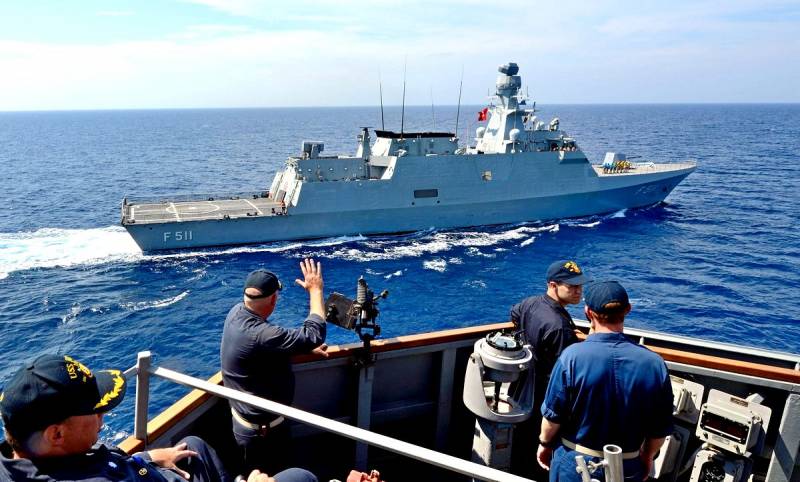 Before the talks between Presidents Putin and Erdogan were just a couple of days. Meanwhile, the situation in Idlib is constantly changing. The Turks are consistently "grinding" the Syrian army, trying so far not to directly clash with the Russian military. The Allies, on the contrary, were able to recapture Sarakib, where our military police went. Each of the parties is trying to approach the summit, where the future of the north of the SAR will be decided, in the best conditions for itself.


Ankara uses other methods to pressure Moscow: it accuses the Russian Air Force of delivering indiscriminate attacks on settlements in Idlib, and opens the borders with Europe for Syrian refugees. Now the United States has joined in putting psychological pressure on the Kremlin, sending an aircraft carrier strike group to the eastern Mediterranean.

Russia, the USA and Turkey are actively increasing their military presence at sea near the Syrian coast. Let's see what all three sides have at the moment.

Today, the Russian Navy concentrated a rather large group in the Mediterranean Sea. For the first time in recent history, it included three of the strongest frigates of Project 11356: Admiral Essen, Admiral Makarov, and Admiral Grigorovich. All three ships are equipped with Caliber-NK cruise missiles, capable of hitting targets at long distances on land and sea.

In addition to the "Admirals", the group includes: a patrol ship of the far zone "Vasily Bykov", a mine ship "Ivan Antonov", a large landing ship "Orsk", a reconnaissance aircraft "Ivan Khurs", two submarines "Varshavyanka", as well as several auxiliary vessels .

Russian ships are capable of performing certain tasks to support the Syrian army and protect our bases, in addition, the Marines were sent to the SAR on board the Orsk. But it is clear that the Bosphorus and the Dardanelles, if anything, do not take them.

This country has the best geopolitical position, since it fully controls the straits through which the supply of our contingent in Syria is carried out. Turkey has the strongest navy in the region, many times superior to the Russian Navy. Ankara has 165 warships that control three seas at once and can be quickly relocated. For comparison, the Turks can put up 20 frigates built according to German and American projects against our three Admirals. Against the two Varshavyanka, 13 submarines, as well as 33 landing ships and 10 multi-purpose corvettes.

To ignore Turkey’s military dominance in the Eastern Mediterranean would be very reckless. Turkish ships carry out regular duty close to the Syrian territorial waters.

It just so happened that in the Mediterranean Sea at the moment the Pentagon has at once two AUGs. There is already an aircraft carrier strike group led by USS Harry S. Truman CVN 75. Based on its rotation, the day before it went to replace the AUG with the nuclear carrier USS CVN69 Eisenhower. That is, so far there are immediately two hundred thousand tons of American diplomacy. The USS CVN69 Eisenhower brought two Ticonderoga missile cruisers and three Arly Burke class destroyers. Somewhere under the water hides a nuclear submarine with Tomahawk cruise missiles. On board an incoming aircraft carrier, the state should have up to 90 aircraft and helicopters.

Someone will say that the Americans are just scaring us, but in reality they won’t use ACG against us. Probably not against Russia. But against the Syrians - easily. Recall that in the spring of 2018, President Trump gave the order to launch a missile attack on the government troops of the SAR, allegedly because of their use of chemical weapons.

Some White Helmets may well again concoct a fake “chemical attack”, for which the AUG of the US Navy will punish the Syrians trying to supplant the Turks. Such assistance from Washington could change the balance of power in Idlib in favor of Ankara, which will affect the outcome of the negotiations.
Ctrl Enter
Noticed oshЫbku Highlight text and press. Ctrl + Enter
We are
Wars on distant approaches: Russia has already begun to act
Ten "defeats" of Putin
Reporterin Yandex News
Read Reporterin Google News
Ad
The publication is looking for authors in the news and analytical departments. Requirements for applicants: literacy, responsibility, efficiency, inexhaustible creative energy, experience in copywriting or journalism, the ability to quickly analyze text and check facts, write concisely and interestingly on political and economic topics. The work is paid. Contact: [email protected]
6 comments
Information
Dear reader, to leave comments on the publication, you must to register.
I have an account? Sign in