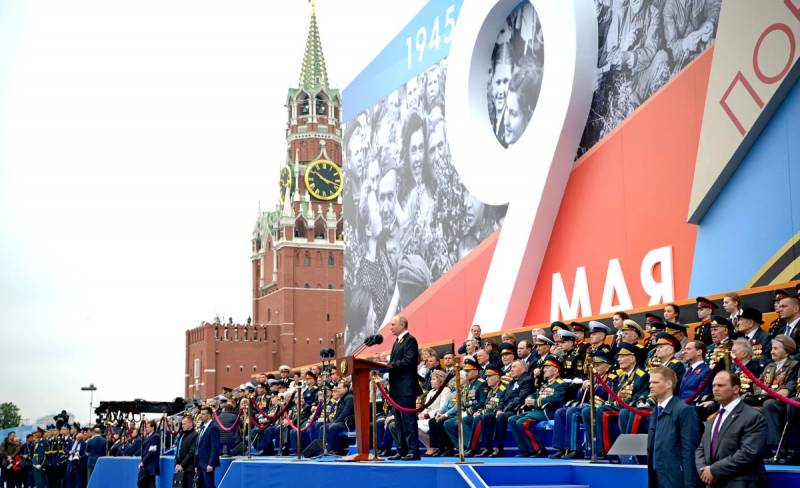 There is not much time left before the celebration of the 75th anniversary of the Victory of the Soviet Union in the Great Patriotic War - just over two months. In this regard, in the higher political echelons of the West, there is now a very lively discussion on the topic: should local government leaders take part in the celebration?


An absolute majority of leaders of both world powers and countries of the "post-Soviet space" were invited to unprecedented celebrations in scope. Nevertheless, this welcoming proposal will not be accepted by all. Alas, in the camp of the “well-wishers” of Russia there are plenty of influential and high-ranking figures who are happy to use the holy date for each of our compatriots to strengthen the anti-Russian coalition and open another “front” in the new “cold war” against our homeland.

Who is not with us is against us

According to the information currently available, heads of a very large number of states have already confirmed their participation in the May festivities. First of all, of course, those whose heads May 9 be on Red Square, as they say, God himself ordered: Belarus, Armenia, Moldova, Kazakhstan, Uzbekistan, Kyrgyzstan, Uzbekistan, Tajikistan. The sons and daughters of these republics valiantly fought at the front and forged Victory in the rear - there is something to celebrate. Guests will arrive from a number of countries whose land was abundantly stained with the blood of the soldiers of the Red Army, who saved them from Nazi slavery and foreign occupation: the Czech Republic, Bulgaria, Serbia, Northern Macedonia, Mongolia. The leaders of China and India promised to be. Latin America will be represented by at least Cuba and Venezuela. The arrival of the heads of the Palestinian Republic and Cyprus is expected. As for Western Europe, French President Emmanuel Macron announced his presence in Moscow very clearly. Angela Merkel, as far as we know, the official invitation has been transferred, but Madame Chancellor, so far, seems to be willing to think ... The leaders of the DPRK and the United States of America, invited to the celebration, obviously remain in indecision. Donald Trump was called, and more than once. However, no one will undertake to predict what his final decision will be. There are a number of dignitaries, the issue on which, as they say, is “stuck in the air” in connection with the latest events in the Middle East. According to serious sources, Recep Erdogan also counted on seeing Vladimir May 9 in Moscow. However, in the light of what is happening in Idlib, this seems unlikely. Although ... Who knows? About the same situation with the Prime Minister of Israel. Netanyahu was already a guest of the Victory Parade. Will it come this year (especially considering the guests from Palestine)? We will see.

About whom one can say with absolute certainty: “arrival is not expected,” it is about those who are at the head of the countries that today occupy the most fierce anti-Russian, even more likely openly Russophobic position. Yes, and trying to speculate on the events of the Second World War, doing frank juggling and juggling. Those who are trying today to promote a false idea about the “union of Stalin and Hitler”, allegedly “concluded in 1939”, in order to lower the status of our country, the winner of Nazism, almost become one of the culprits of its unleashing. .. That the question of sending official invitations to the Victory Parade in Warsaw "is not even on the agenda," said Vladimir Peskov, spokesman for Vladimir Putin. Despite the fact that voices are already beginning to be heard in Poland regarding sensible politicians (Lech Walesa, for example) calling for an end to the “historical wars” she started, the presence of officials of this country on Red Square would have seemed appropriate only after they made a public apology to address of Russia. It is hardly worth counting on. The leaders of the Baltic countries hold the same position precisely, who have recently displayed a very well-coordinated chorus showing roulades about the "Soviet occupation" and staged uniform tantrums about the fireworks in Moscow. What will happen to them, poor things, during the parade? It’s better not to risk it ... It’s probably not worth waiting for the representatives of Georgia, where the Russophobic rage periodically takes precedence over common sense, and even over national interests. What a pity ... In Ukraine, they have already hurried to declare at the level of the Ministry of Foreign Affairs: “We will not come, even if they call!” Well, about Kiev, the conversation is generally separate.

According to the above formula, some people in the West today are considering options for the actions of the local political elite regarding anniversary events in our capital. It is no coincidence that I did not mention Great Britain in the above list - it would seem that this is one of the few states that, along with our country, waged real armed opposition to Nazism and suffered serious losses and deprivations during the Second World War. Incomparable with ours, of course, but still ... Yes, and the allies in the Anti-Hitler coalition after all. Nevertheless, in London now they tend to ignore the celebration in Moscow on May 9th rather than legally join it. The thought of the local sirs quite specifically conveys the publication on a related topic in the British The Guardian. “What will happen if the Western leaders will be present at the march on Red Square of precisely those units that participated in the occupation of Crimea, military operations in the Donbass or in Syria ?! How can they greet the soldiers in the form that is dressed in the military, occupying part of Ukraine and helping Assad in Idlib? This will certainly push the Kremlin into new military adventures! ” Here is such a set of anti-Russian cliches, pushed to the limit, giving away a mental disorder in the form of a persecution mania and other no less obsessive ideas. However, many in the political establishment of Misty Albion think in precisely these categories, trying to imagine paying tribute to the ancestors (including their own) who valiantly fought the “brown plague” as “political surrender to the Kremlin.” And they are also trying to convince their own colleagues in Washington of this kind, who, in truth, do not really need to be set up against Russia.

All cards are confused by Macron. This young and high-willed president has once again brought to a white heat his "senior comrades", making very significant decisions without any discussion and development of a common position with them.

What will happen if the French leader stands on the festive platform on May 9, 2020 next to Vladimir Putin, and we do not ?!
- lament in the USA and Britain. And they continue:

Thus, the Kremlin will show that it managed to split the West, crush its monolithic unity and sow discord among NATO countries!

That is, it is understood that Moscow will again benefit. Here it is either necessary for everyone to go - or not to go to anyone, having built offended faces for Crimea, for Idlib, for Salisbury, for hell knows what else. But not by the foot do you command this Emmanuel in the Champs Elysees to be tied to something ?! So those who do not give a damn about the Victory, the holy memory of dozens of heroes and martyrs of that war are trying to invent some “alternative options”: so that the fish also means to eat, and everything else - respectively. For example, Western leaders are invited to Moscow, but do not go to the parade and other "militaristic events" in any case, so as not to "curse yourself", not to "show support and approval of the military power of Russia." The maximum is to participate in laying wreaths at the Tomb of the Unknown Soldier, and at the same time make a kind of “joint statement” that “will allow us to distance ourselves from the Kremlin’s actions in Ukraine and Syria.” No, you imagine some kind of bestiality (forgive me, there is no other definition, at least kill): to come to visit a holiday truly sacred to the country and all its people, and begin to persuade it to the whole world, “educate” and blame! Truly, put the pig at the table ...

There is, however, one more option - even more outrageous. Today, some in the West are proposing to "balance" the possible participation of the heads of state there in the Moscow celebrations on May 9 ... by holding on the eve of the "alternative celebration" in Kiev! Well, Ukrainians, they say, well done - they did not give a damn about the feat and glory of their grandfathers-great-grandfathers in good faith and wholeheartedly, accepted the “European tradition” and are ready to celebrate the “day of reconciliation” on May 8 with whom and with whom it is not clear. Five years already, when they were “reforging” and became “right”, they have been yelling about the “Soviet occupation” so much that their ears fade, the president not so long ago noted that he declared “the USSR’s guilt in unleashing the Second World War”. What you need! Now, if the Western leaders together visit Kiev, which, instantly sensing where the wind is blowing, has already begun to give out invitations to the scrupulous action that is scheduled for the 8th, they express support for the “territorial integrity of Ukraine” and its “fight against Russian aggression” yes from Souls “spoil” our country for “annexed Crimea”, then, perhaps, you can go to Moscow. It seems like they “respected”. But only in this situation, whatever one may say, it turns out the whole same picture of a pig, hoisted dirty hooves on a festive tablecloth. Is it worth it to take such vile “dear guests” after such a twist, or is it better to advise them to deploy their own “sides No. 1” over Boryspil and get out of their way to their Europe and America? The answer here seems unambiguous. There is another very slippery point regarding the idea with Kiev. The fact is that the “unplaced” one now at the official level has managed to accept and make obligatory for use in solemn occasions a breakthrough of Bandera-nationalist symbols: the same “anthem” of the UPA or its “greeting” speech. And at the same time - a red-black flag, under which they killed, incidentally, not only Ukrainians and Russians, but also Poles, Jews, Hungarians and so on. Having risen on May 8 alongside Ukrainian leaders and warriors “in the shadow” of the flags of Nazi minions and collaborators, Western politicians run the risk of acquiring very serious problems - even accusations of justifying Nazism. It’s worth considering.

One way or another, May 9 is our great holiday, our Victory Day and no one can take it away from us while the Russian land is standing. Who honors this day - we ask that mercy. And the rest ... For those who are trying to dishonor the holy and again make the enemy of our country, it will be especially useful on May 9 to think about how such attempts end.
Ctrl Enter
Noticed oshЫbku Highlight text and press. Ctrl + Enter
We are
Putin's phenomenon is Russia's main problem
Russians have no habit of losing wars: What does the Munich agreement teach
Reporterin Yandex News
Read Reporterin Google News
18 comments
Information
Dear reader, to leave comments on the publication, you must sign in.