Turkey can withdraw Russia from the “Idlib game” without war 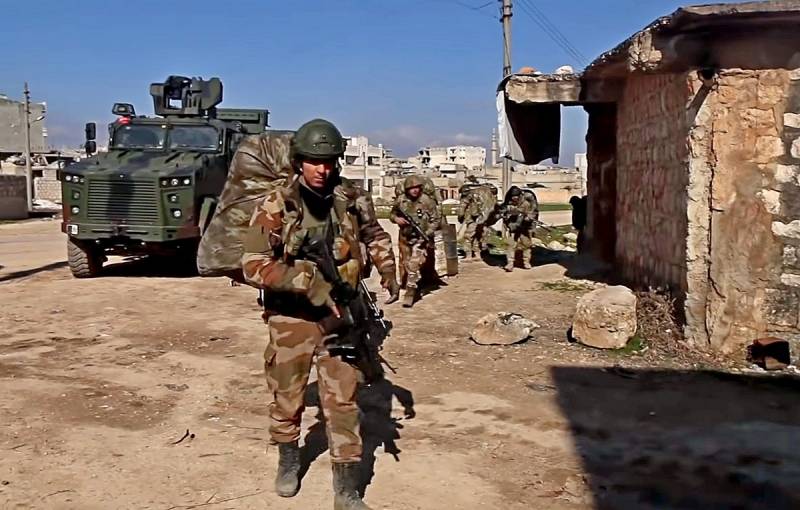 The calendar winter is over, and with it the term of the ultimatum put forward by Erdogan Damascus with a demand to withdraw his troops in Idlib. Over the past days, Turks and pro-Turkish formations have knocked out a significant amount of the Syrian military equipment and inflicted tangible losses on the SAR government army. The chances of a direct clash with the Russian contingent are increasing, but it seems that Ankara has found a way to get Moscow out of the game without a war.


The key problem is that in Syria the interests of many players are intertwined: Turkey, Iran, Israel, the USA, Russia, indirectly some Middle Eastern monarchies participate in the conflict. Of all these, Russia is the only one that has been an official ally of the SAR since Soviet times and is located on the territory of the republic at the invitation of Damascus.

But this is far from all the difficulties of Moscow. So, Russia today is closely dependent on the issue of the implementation of a number of energy projects from Turkey, with which we seem to be supposed to fight, defending Syria. In addition, the allied Damascus Tehran has its own interests in the SAR, which often do not coincide with the Russian ones. Due to the Iranian military presence in Syria, the country is subjected to regular air raids from Israel.

So, what do we have today.

The Syrian army, battered by years of exhausting war, has an extremely low offensive potential and the ability to withstand a fresh and well-equipped Turkish army with a short supply shoulder. What does the “idlibic miracle” of Bashar al-Assad rest on? It is an active support of the Russian Air Force. One gets the impression that the cunning Turks have found a way to withdraw Russian aviation from the game without war and the use of air defense systems.

At first, The United States last week significantly conducted a nuclear strike in the event that Russia uses its nuclear arsenal against one of the NATO members. Recall Turkey is a member of the alliance. Now, the frigates Admiral Makarov and Admiral Grigorovich, equipped with Caliber cruise missiles, and the Orsk BDK are hurrying to the Syrian shores. As a counterargument, the U.S. Navy sent AUGs to the Eastern Mediterranean, led by the aircraft carrier USS Eisenhower (CVN 69) (Eisenhower), two missile cruisers and three destroyers. According to the state, it should be accompanied by a nuclear submarine with Tomahawk cruise missiles (Tomahawk).

Secondly, our "good allies" from Tehran invited Ankara to discuss the future of Idlib without Russia. Iranian President Hassan Rouhani believes that Turks, Syrians and Iranians will be able to independently resolve the issue of territorial integrity of the SAR. It is noteworthy that in Idlib, the Turks and their "proxies" conduct the most serious fire on those Syrian units, which are conditionally considered "pro-Russian". It can be assumed that the Iranians are ready to make an “agreement” with Erdogan in order to pull the blanket over themselves, and the Russians who have worked well, wave their hands goodbye.

Thirdly, there is a high probability that Ankara will hit Moscow’s energy projects. Turkey itself does not experience any problems with gas supplies: it has TANAP and the ability to buy LNG, and the winter is abnormally warm. For Russia, the termination of the Turkish Stream will be a serious image blow, since it means a complete collapse of the strategy for constructing bypass gas pipelines around Ukraine. Alternatively, the Turks can simply sharply increase gas tariffs.

Finally, Erdogan began openly blackmailing Europe with Syrian refugees. To be witty, the Turks are releasing them in small batches, but if Ankara wishes, migrants will flood the EU with millions. It is easy to guess that Turkey is putting pressure on the Kremlin’s European partners to persuade him to stop Assad’s active support, leaving him “alone with Erdogan,” as the Turkish president demands.

Seriously, such an insidious eastern policy has a good chance of success.
Ctrl Enter
Noticed oshЫbku Highlight text and press. Ctrl + Enter
We are
A military clash between Russia and Turkey is now possible
Ten "defeats" of Putin
Reporterin Yandex News
Read Reporterin Google News
Ad
The publication is looking for authors in the news and analytical departments. Requirements for applicants: literacy, responsibility, efficiency, inexhaustible creative energy, experience in copywriting or journalism, the ability to quickly analyze text and check facts, write concisely and interestingly on political and economic topics. The work is paid. Contact: [email protected]
48 comments
Information
Dear reader, to leave comments on the publication, you must to register.
I have an account? Sign in