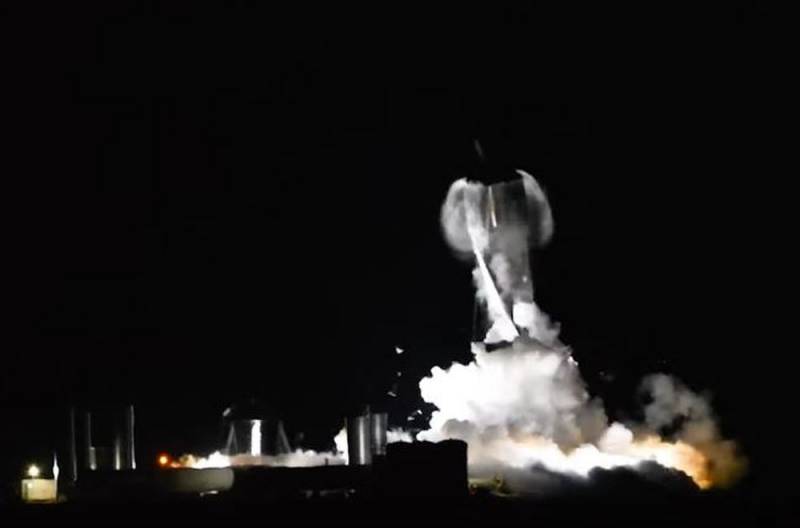 The American company SpaceX conducted another test of the prototype rocket Starship. They were held at the company's training ground near the village of Boca Chica (Texas). Like the previous similar cryo-test, these tests culminated in an explosion.

It is specified that during the specified cryo-test (maximum filling of fuel tanks with cryogenic liquid) no one was hurt. It is explained that this prototype was specially created for testing, i.e. its destruction (destruction) was planned. Moreover, a decent amount of different tests and tests are planned in SpaceX.

Despite the fact that I was hoping for a successful test, I have to admit that it was pretty epic, but SN2 will definitely be better
- wrote user Christopher Campfield under the video.

By the way, the head of SpaceX, Elon Musk, promised that the orbital flight of the Starship prototype will take place in 2020.

It should be added that on January 29, 2020, SpaceX already conducted a similar test. Then also tested the capacity (tank, tank) for Starship. The overpressure was 8,5 bar.


Necessary to remindthat flight tests of the Russian Angara-A5 heavy carrier rocket (LV) will be substantially reduced. Moreover, test launches will be reduced from ten to six at the Plesetsk cosmodrome, and there may be even fewer test launches at the Vostochny cosmodrome.
Ctrl Enter
Noticed oshЫbku Highlight text and press. Ctrl + Enter
We are
Even closer to the goal: Starship prototype successfully “jumped” at 150 meters
"Explosive" Dragon and Belated Boeing: who will be the first to replace the "Union"
Reporterin Yandex News
Read Reporterin Google News
16 comments
Information
Dear reader, to leave comments on the publication, you must sign in.