Meeting with the head of the HRC Dumenko: Bartholomew will put the Russian Orthodox Church in a difficult position 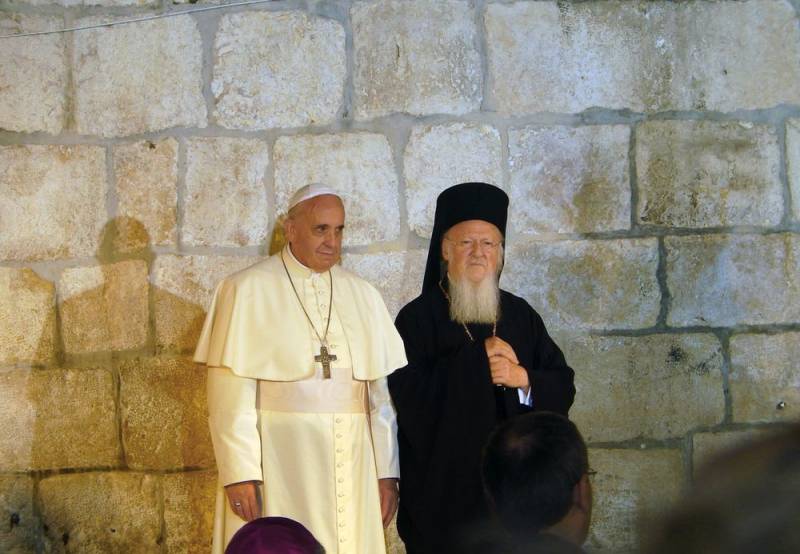 The West is doing its best to tear Ukraine away from Russia. Therefore, it is not surprising that on February 8, 2020, Pope Francis, during a meeting in the Vatican, called the Ukrainian leader Vladimir Zelensky “the president of the world.” After that, the Patriarch of Bartholomew of Constantinople sharply wanted to arrange a meeting of all the primates of the canonical Orthodox churches and invite the head of the non-canonical Orthodox Church of Ukraine (PCU) "Metropolitan" Epiphanius (Dumenko) to attend it.


It should be noted that the words of Francis were not caused by the fact that Zelensky, as a former comedian, made the pontiff laugh, just the Vatican is one of the tools of the West, skillfully playing on the ambitions of the inexperienced politicians... As for the idea of ​​Bartholomew, it is explained by a strong personal desire to harm the Russian Orthodox Church (ROC), and at the same time to squeeze a competitor on the "theological front" in the struggle for peace ("fragrant oil" used in rituals).

From the synod of the Patriarchate of Constantinople it was reported that soon they would decide on the convening of a "pan-Orthodox meeting with the question of the situation in Orthodoxy." They promise that "the name will be the same as in Amman." At the same time, Bartholomew is very concerned that before this, for the first time “after the great split between 1054 between the West and the East,” a “synaxis (out-of-office meeting) took place, in which most of Orthodoxy participated without Constantinople.”

It is specified that at the "pan-Orthodox meeting" Constantinople wants to discuss not the topic of Ukraine, "but what happened in Amman." Since, according to Constantinople, it was a "step against unity."

As informed RIA News a source from religious circles, Bartholomew invites the “Metropolitan” Dumenko specifically, so that the Patriarch of Moscow and All Russia Kirill, as well as other opponents of the provision of autocephaly of the PCU, refused to come to this “pan-Orthodox meeting.”

Now Bartholomew is forced to go and sit at such a table, because he cannot do otherwise
- the source is convinced.

Patriarch Bartholomew does not act with peaceful intent, he does it with obstinacy and in the spirit of revenge
- added a source.

Moreover, the source believes that the head of the Russian Orthodox Church can go to the specified event. The main thing is "not to serve the liturgy with Epiphanius."

In this regard, the source suggested that a "pan-Orthodox meeting" could take place immediately after Easter, since in May 2020 a trip to the United States is planned for Bartholomew. In addition, the source emphasized that "the Orthodox Church was separated from the Catholic because it does not have the first."

The first in Orthodoxy is only Christ. Bartholomew made such a mistake and created a split
- the source is convinced.

The source noted that the mentioned “pan-Orthodox meeting” would not be held in Turkey or in Jerusalem. Most likely, it will be held in Greece or in another neutral country. Regarding the possibility of holding such an event in Moscow, the source replied that it would be reasonable, but "anger is a bad adviser."
Ctrl Enter
Noticed oshЫbku Highlight text and press. Ctrl + Enter
We are
“Considering merit”: Philaret was deprived of canonical rights
"Epiphanius was surrounded by" pro-Moscow forces ": Filaret refused to swear allegiance to the PTsU
Reporterin Yandex News
Read Reporterin Google News
6 comments
Information
Dear reader, to leave comments on the publication, you must sign in.