Putin's departure: four scenarios for Russia presented in the West 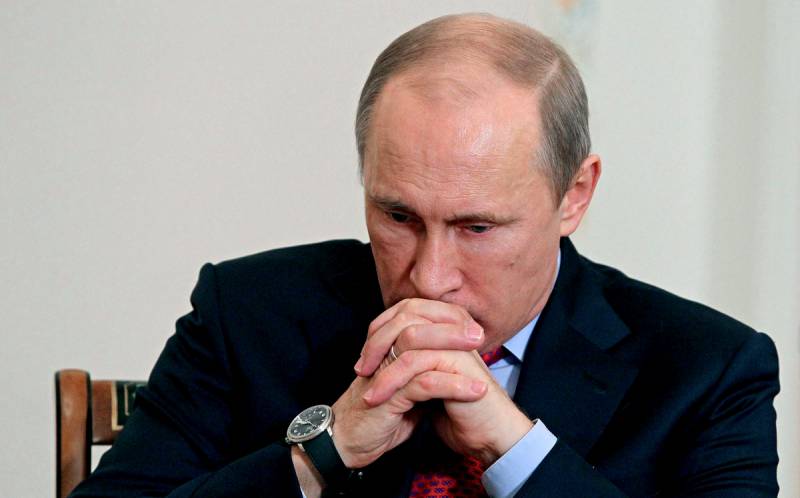 Each new serving News about the advancement in our country of the constitutional reform proposed by Russian President Vladimir Putin, causes in the West, and especially in some countries of the "post-Soviet space", recently turned into strongholds of the most rabid Russophobia, another surge of bright emotions that pulls call a full-weight hysteria. “Eternal Putin”, “new Empire”, “preparation for aggression”!


Such provocative “forecasts” are increasingly actively circulated in the media, the “expert” environment and some politicians quite a certain number of states. The domestic “opposition” is also not far behind in escalating the panic, as was to be expected. All of this, of course, is more than predictable and logical, however, it is perhaps worth asking the question: what really should our country bring about the upcoming changes in its basic law?

I must say that in trying to discuss and analyze the reforms of the domestic Constitution, Russia's “well-wishers”, in fact, voice their own phobias and the most secret fears. Here is a striking example: on February 24 this year, an “international round table” was held in Kiev with an extremely intriguing title: “Changing the Constitution in the Russian Federation: purpose and character. What to expect? ” By the way, judging by the statements of its organizers, in addition to local politicians, “political scientists” and “experts”, “Russian opposition members who are in political emigration” and even representatives of the Anti-Putin Front organization also took part in this event. What was it about? I will quote from one of the organizers and, concurrently, the main "speakers" of the event, a certain Oleg Lisny:

The changes to the Russian Constitution that Putin is planning unambiguously indicate mobilization measures aimed at preparing external aggression against both Ukraine and other countries neighboring Russia ...
Next - the next calls "to be ready for further struggle" and "actively confront Russia at all possible international venues." Of course, it would be possible to perceive the whole action as a rather harmless bunch of rattles, but it’s hardly worth it. On such “discussion platforms” in the “non-fallow”, Baltic, and Poland, not harmless slogans, appeals and doctrines that later official representatives of our country have to deal with at various official international events are developed and tested for the prospect of introducing into the public consciousness forums.

As another example, I will cite a speech on the same topic from specialists in the information war with Russia of a higher rank. We are talking about the report “Reflections on the future of Russia, possible after 2024”, compiled, as stated by “a team of political experts specializing in the“ Russian issue ”and working in“ universities in the USA, Europe and Russia. ” This document was distributed at the last Munich Security Conference by representatives of the Friedrich Ebert Foundation (FES) and the Berlin Center for East European and International Studies (ZoiS). The most interesting thing here is a set of four scenarios for the development of our country, which the West sees as "positive" and "negative." Really, this is something! How do our “friends” see “a good future for Russia”?

So the first scenario is "Wounded Eagle": the president of the country is a woman who "seeks to restore stability in the country." Naturally, this is absolutely impossible to do without the “help of the West,” which he, of course, generously provides. In exchange, Russia is "rebuilding foreign policy radically", making its main principle "a complete rejection of international confrontation!" Everyone is happy...

Now scenario number 2, which the authors of the report consider “even more optimistic” and is called "Golden Eagle": “United Russia” lost the election and Putin “transfers power from hopelessness” to a certain billionaire who turns out to be “a liberal who does not have nationalist views.” He builds his policy, "not looking back at the great past, but thinking about the future." Result? Russia is "drastically cutting its military budget," reconciling itself with Ukraine, helping it to "reintegrate the Donbass." And after "it becomes an ally of the United States in the confrontation with China." The crown of everything: "May 9, 2025 on Red Square, Russian, French and American military marching shoulder to shoulder ..." Does it not remind you of anything?

However, it's time to move on to "negative scenarios." "Experts in Russia" entitled them as "The eagle is nervous" и "The eagle screams". Not a royal bird came out from them, but a feathered hysterical, by golly ... In the first case, Vladimir Putin makes his successor “a representative of the military elite who has long been preparing for this role”. The new leader takes two “key steps”: “organizes a civil war in Saudi Arabia”, which leads to a rise in oil prices and “conducts a show trial against Alexei Navalny”. The Kremlin’s foreign policy remains the same, “everything is bad with the West”, but “stability reigns in the country”, which, according to the authors of the study, plunges it almost into the Middle Ages. In the last version, the world comprehended economic crisis, oil prices collapsed, chaos and gloom in Russia, and Sergei Shoigu became president in 2024, which marks "a complete transfer of power to the security forces." Further on, it’s bad Hollywood in general: “mass repressions” begin in the country, the “new head of the Ministry of Internal Affairs” (like the NKVD?), Who “suppresses internal enemies”, goes on a campaign to Ukraine and Georgia, where they had already been stationed by then NATO troops. The threat of the Third World hangs over the world. The curtain ... All of this near-schizophrenic “political science” I quoted so extensively solely for one purpose - to give a complete picture of how the “civilized world” sees for our country the answer to the question: “What is“ good ”and what is“ badly"? As positive, they consider only those options in which Russia again takes a very specific pose in front of the "good and generous West", completely abandons any independence in foreign policy, disarms itself and surrenders to the mercy of the "winners". Any scenarios in the framework of which there is a military-political strengthening of our Motherland are immediately transferred by a sly gang of "experts" to completely apocalyptic planes. This is more than a frank answer to what they dream of doing with us ...

Only this harmonious and tearing away throat from the effort to overthrow each other's chorus of “critics” of constitutional reform clearly indicates that Russia needs it like air. Upon closer examination, it is precisely those points that cause the greatest negative in the West and among our “democrats" with liberals that are the most significant and constructive. Establishing the supremacy of the laws and interests of our country over all kinds of examples of "international law"? Here, in my opinion, there can be no two opinions at all. No, if someone is delighted with the prospects of paying 50 billion in thieves from Yukos according to the decision made in The Hague, to carry out a heap of politically motivated decisions of the ECHR, littered with swagger of perverts, sectarians and other "oppositionists" offended by Russia - then another thing. In this case, it would be nice to create a special fund, in the filling of which we invite our “democratic public” to participate. Here from him and pay! I am afraid, however, that there will be no money in this fund at all - this audience can only take, but not give. However, the main thing here, of course, is not finance (which, incidentally, Russia can spend with much greater benefit), but the firm decision that the fate of our Motherland should be decided only by itself, by its people, and not by "international organizations", no matter how their names were not magnificent. What else is there? The most severe ban on foreign citizenship and residence permits abroad not only for the future president, but for all representatives of the highest authority? Yes, it was necessary to do it yet God knows when! What a blow, so a blow to the “fifth column”! How many crooks, who do not even hide their own work on hostile states of Russia, will be cut off from the prospects of achieving their goals. And the rest will have to choose once and for all - either a political career in Russia, or “love” for her at a distance. It should not be otherwise.

Regarding the most fresh moments, so to speak, voiced and approved by Vladimir Vladimirovich - regarding the proposal to consolidate in the main law that Russia “honors the memory of the defenders of the Fatherland, defends the historical truth, does not allow falsification of history, diminishes the significance of the people's deed in the defense of the Fatherland” , everything is clear here. By the way, here again we can use the attitude of our Western “friends” to this moment as a “litmus test”. None other than the former US ambassador to Ukraine, John Herbst, recently spoke out in the sense that "the current leadership of Russia" attaches such importance to the Great Victory, "because only it somehow justifies its existence in its current form." It is said, of course, with a mockery and a desire to spit in the soul, but there is some truth in this - where would we be without May 1945 ?! Well, if our enemies understand this, then for us, the heirs of the victors, to forget about this is a mortal sin. The same can be said about intentions to fix in the Constitution a provision on the protection of the interests of Russian-speaking people and compatriots abroad, as one of the main priorities of the state. At the same time, one should carefully listen to the president’s words so as not to miss an important nuance: Putin focuses on the fact that he means “native speakers of Russian culture and the Russian language, who undoubtedly have the right to call themselves Russian”, and not just “representatives of a certain ethnic group or nationality. " Hearing this, in Kiev they got very tense? They did the right thing ... In the end, why is Hungary today much more successful in upholding the rights of its people in the same "unbroken" than Russia? Not ashamed?!

Concerning many unambiguously positive things, such as constitutionally enshrined (finally!) Social standards and guarantees, discussion, perhaps, is not required at all. Still, they wanted it so much - that the state “turned its face” towards itself, which was not “a simple people”? Well, they waited ... It is clear that some of the meanings and far-reaching intentions laid today in the constitutional reform are not yet clear to everyone except its initiators. For example, the idea of ​​the Council of State. The spiteful critics see in it only “an instrument for strengthening Putin’s power”. They see it in everything. However, even from sufficiently sane commentators, an analogy that seems to lie completely on the surface escapes. Yes, yes - with the State Defense Committee, which was created on the most formidable days of the Great Patriotic War and proved to be the most, perhaps, the most effective government body in the entire history of the USSR. I agree that this kind of association sounds very alarming. But what can you do if life does not seem to leave much choice, and the Kremlin is preparing just for the toughest scenario? Here it’s better in advance than, as it once was, after the fact. If anyone is in doubt, I will quote in conclusion, again, from the same Munich Security Conference. US Secretary of State Mike Pompeo said at the forum that the United States "will by no means allow the emergence of a new Russian Empire." There is no doubt that this threat is not empty. Washington intends to prevent our country from becoming renewed, powerful and free in absolutely any price. And about “we will not allow” ... Here we are, Mr. Pompeo, we will still see.