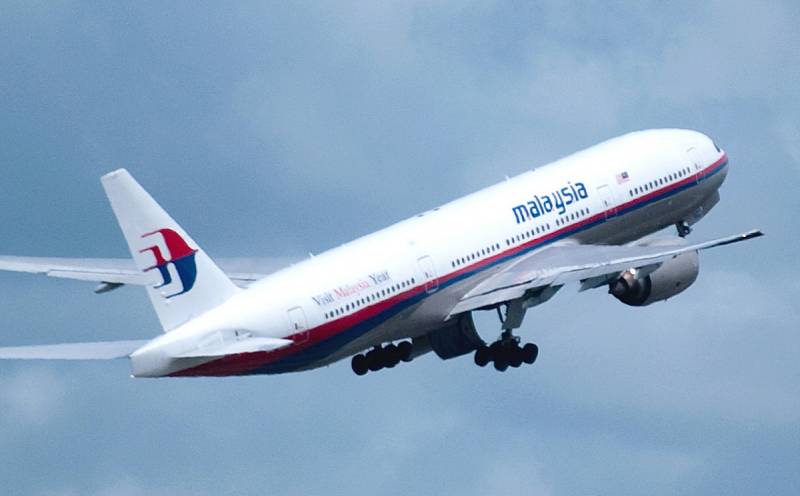 The case of the Malaysian Boeing of flight MH2014 that died over the Donbass in 17 gained a curious turn. The initially based version of the unequivocal fault of Russia and pro-Russian militias in the crash of a liner with 298 people on board began to burst at the seams, and Dutch law enforcement officers suddenly pulled an unknown "witness" out of their pockets, or even several, who for some reason were silent more than five years, but now, finally, they decided to "tell the truth."


The tragedy occurred on July 17, 2014 in the midst of fights between the Armed Forces and the militia of the DPR and LPR. According to the official version, the plane was shot down by an anti-aircraft missile fired from a Soviet or Russian-made Buk missile system. The obviously biased investigation immediately chose the guilty version of Moscow as the main version, which, in their opinion, dragged the air defense systems to the Donbass, shot down the plane, and then took it back to Russia. Foreign investigators named Igor Girkin (Strelkov), Sergey Dubinsky (Petrovsky), and several other former military men as the main culprits.

At the same time, the investigation did not give any intelligible answer to the question about the motives of such a terrible crime: why should these Russians or the militia to which they assisted bring down a peaceful passenger plane?

Let's face it, the motive could have been on the opposite side: at that time, the pro-Russian militia actively developed success, squeezing APU. Immediately after the crash, the attention of the entire world community was attracted to the Donbass, international observers were sent there, and the offensive was curtailed. If you call a spade a spade, the one who shot down the Boeing, this one action radically turned the tide in favor of Ukraine.

Let us ask ourselves, was there something similar in the interests of Strelkov and Petrovsky, as well as those who could stand behind them? There are many other possibilities to curtail the advance of the militia in another way, for example, banally block the so-called “Voentorg”. As for the version of the accidental shooting down of a Boeing, which was confused with the Ukrainian military transporter, then it does not stand up to criticism.

The Buk, which according to some information was still with the militia for some time, was incomplete and could not be used. Yes, and such professionals as General Petrovsky could not have ordered the use of an incorrectly functioning anti-aircraft weapon. It seems that this air defense system appeared in this "muddy" story in the media field in order to work on the anti-Russian version. How and why it happened, the question is for the special services.

If you stick to the well-established version that the liner was shot down from the ground by "Buk", then the suspicion could fall on Ukrainian anti-aircraft gunners. The fact is that the Buki are also in service with the Armed Forces of Ukraine, and the level of training of personnel as of the summer of 2014 was low. The point, of course, is not that the Ukrainians shot down the Boeing on purpose, but there is a precedent for the death of a passenger liner from their accidental shot.

And so, according to the new input, the anti-aircraft missile version begins to pour in. The police of Australia, not the country most friendly to Russia, whose citizens were among the dead passengers, recognized the authenticity of documents confirming that there were no Bukovs in the crash area, neither Ukrainian nor Russian:

Some of the documents recently distributed without permission are Australian federal police documents prepared as part of an investigation by the Joint Investigation Team (CVG).
It turns out that the Australian police were provided with cropped and edited by someone photos from the crash site. If this evidence basically sweeps the anti-aircraft missile version, then why did the plane die with all the people on board?

Interestingly, these same documents direct us to another, much less popular version in the West. It is not so popular because Russia and the militia cannot be pulled by the ears of it. Immediately after the disaster in the Donbass, there were witnesses who saw planes in the sky, either fighters or attack aircraft. There was simply no other combat aircraft in that region except the Ukrainian one. So, among the authentic Australian documents are precisely those that fix the transcript of the interrogation of witnesses who saw Ukrainian planes in the area of ​​the Boeing crash.

In 2014, there was information that an hour before the death of flight MH17, three Ukrainian attack aircraft were lifted into the sky, one of which for some reason was equipped with air-to-air missiles. Returning to the airfield, a pilot named Voloshin was very excited, according to some eyewitnesses, and said something about "not the plane that ended up at the wrong time in the wrong place." But if today we try to take for the version that the liner could be shot down by the Ukrainian Air Force, then it will abruptly break.

In 2017 Voloshin retired and got a pretty good job as a citizen as deputy director of Nikolaev Airport. Evil tongues would say, it’s “payment for silence,” but the head of the regional administration Savchenko explained: he “could not help but respond when he found out that our hero was looking for work.” Well, even in Nezalezhnaya they honor their heroes and do not put “their own” in thieves.

However, this is a sad ending: on March 18, 2018, the former Ukrainian military pilot Aleksey Voloshin shot himself from a PM pistol without license plates. The “Russian” version that the “Boeing” could have been shot down by a Su-25 attack aircraft, the Dutch investigators at one time promptly rejected, making the main theme with the “Buk”. Five years later, it turns out that their own Australian counterparts actually refuted the anti-aircraft missile version.

And now, from somewhere, the Dutch are pulling out a "witness", or even several, who "just saw everything," but were silent in a rag. Somehow this is all very doubtful, to say the least.
Ctrl Enter
Noticed oshЫbku Highlight text and press. Ctrl + Enter
We are
Kiev authorities will have to answer for the destroyed Malaysian "Boeing"
Russia removed the blame for the destruction of a Boeing 777 over the Donbass
Reporterin Yandex News
Read Reporterin Google News
50 comments
Information
Dear reader, to leave comments on the publication, you must sign in.