Odyssey of Academician Chersky: when the ship gets to Nord Stream 2 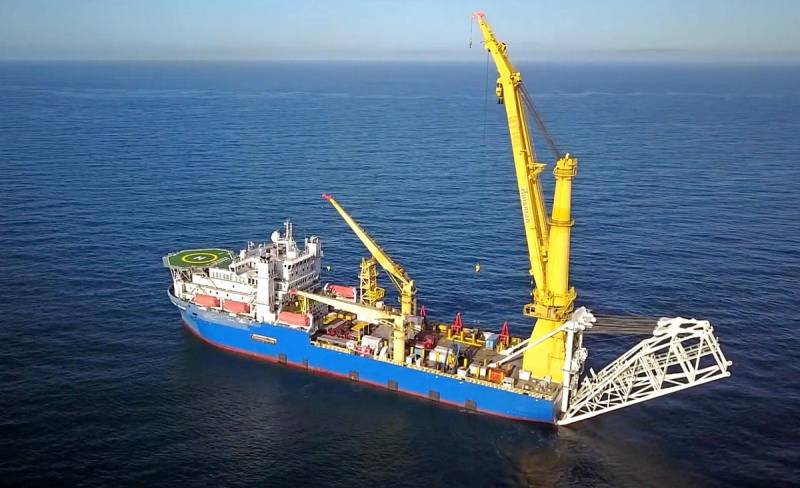 At the end of 2019, President Donald Trump imposed sanctions on contractors for the construction of the Nord Stream-2 and Turkish Stream pipelines. The US authorities explained their decision by saying that they “want to protect” Europe from Russian gas and the emergence of a monopoly position in Moscow. In fact, restrictive measures aim to increase the competitiveness of American LNG in the European market.


In Berlin, this “concern” for themselves was extremely disapproving: Germany intended to receive an additional 2 billion cubic meters of Russian gas annually through Nord Stream-55, which was supposed to be used to modernize the energy sector as part of the ongoing “green revolution”. German business elites directly say that without a gas pipeline, their competitive ability will decrease compared to the Americans. Chancellor Merkel insists that Nord Stream 2 be completed.

The key question is whether Gazprom can do it on its own, and if so, how long will the construction take in time? United States Secretary of Energy Dan Bruyett has recently been very skeptical about our options:

They cannot. This will be a very long delay, since Russia does not have the appropriate of technologies.
The American strike was very precise and precise: the construction got stuck in the Danish waters, which were the most problematic for Russia, and at that stage when only a few percent of the route remained to be completed. Due to the threat of US sanctions, a few foreign contractors are now close to the project.

President Vladimir Putin has announced a new deadline for putting Nord Stream-2 to a maximum in the first quarter of 2021. The head of the Russian gas monopoly, Alexey Miller, is beating himself in the chest, promising to complete the pipeline, for which he will attract all the necessary funds and equipment. Unfortunately, in many respects the US Secretary of Energy is right: Gazprom has no such experience of independent work, as well as specialized vessels corresponding to it. We’ll have to fill up the bumps, and the actual deadlines for the gas pipeline will most likely be more than declared.

Of the vessels that Gazprom has available, the most suitable for laying the Nord Stream-2 is Akademik Chersky, a crane-assembling pipe-laying vessel. At the time of laying in China, it was called Jascon-18, after which it was retrofitted in Singapore, bought by a subsidiary of Gazprom and renamed. It was assumed that it will be used in the development of the Kirinsky gas condensate field in the Sea of ​​Okhotsk. According to reports, the vessel is still not fully technically equipped, in addition, it requires an average repair of the propulsion system.

"Academician Chersky" was considered the number one candidate for the completion of Nord Stream-2 on its own. The problem is that it was located at the maximum distance from the place of work, in the Far Eastern port of Nakhodka. Some time ago, the ship attracted universal attention, starting to make curious movements. First, it moved to Singapore, where, as expected, it had to undergo appropriate modernization to work in the Baltic. But on the eve it made a strange maneuver, instead of Singapore, moving to the port of Colombo of Sri Lanka. What can be associated with a sharp change in course?

According to some reports, it follows from the Network that Akademik Chersky will go further to St. Petersburg, where one of the shipyards will be modernized and equipped with the necessary equipment, which has already been purchased from a European supplier. It can be assumed that for some reason Gazprom chose not to get involved with Singapore. It is possible that there were already some obstacles built up by him. Further, as expected, the ship will proceed through the Suez Canal.

But there are other opinions about its possible route. For example, Alexander Frolov, a representative of the Institute of National Energy, considers as follows:

On the one hand, the Northern Sea Route is shorter, and there are fewer risks associated with the possible intervention of certain third parties. On the other hand, there are problems associated with the ice situation on the route. Now it’s hard to drive the "Academician Chersky" along the Northern Sea Route.
If Gazprom chooses the Northern Sea Route, it means that it has real fears that another troubles and delays may await the Russian ship in Suez. It seems that Academician Chersky will have to make a real odyssey to get to Nord Stream 2.
Ctrl Enter
Noticed oshЫbku Highlight text and press. Ctrl + Enter
We are
Gazprom turns from a “national treasure” into a “national disaster”
Peace enforcement operation. Russia inflicts a preemptive strike on Kiev
Reporterin Yandex News
Read Reporterin Google News
6 comments
Information
Dear reader, to leave comments on the publication, you must sign in.