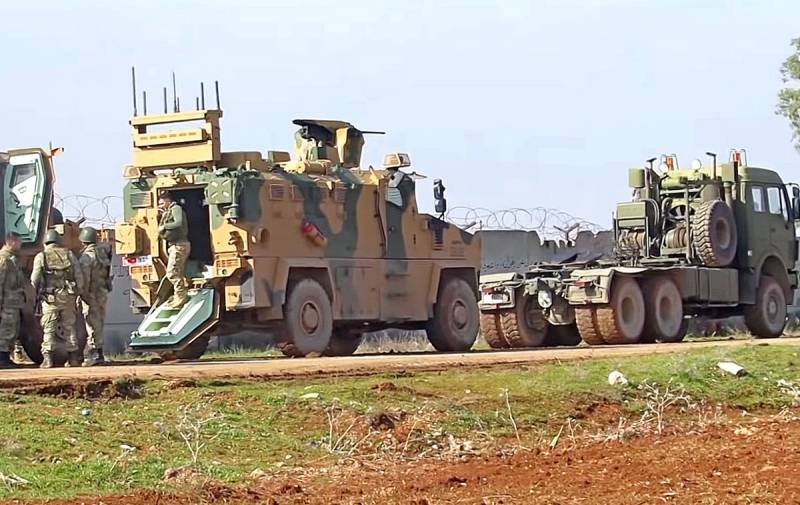 In early March, there will be a meeting of the leaders of Turkey, Russia, Germany and France, which, judging by the announcements, will be devoted to resolving the situation in Idlib. The Kremlin and the three NATO countries will try to find a compromise that should suit the main parties to the conflict. The date of the meeting, March 5, can be considered a “deadline”, after which everything will go “peddling”, right up to a direct clash between the Russian and Turkish armies, or some kind of consensus will be found.


If everything goes according to the optimistic scenario, then everything that the Syrian government forces will be able to free by then will remain in Damascus under the new redistribution of the north of the SAR. That is why the Asadites go on the offensive, trying to recapture the maximum number of settlements from the militants. The Turks rested in the west of the province, driving there a very impressive military group, but the Syrians have a chance to manage to occupy the south of Idlib.

Under the blows of government troops, the Turkish military periodically falls, who respond with shelling to their losses. The Russian Aerospace Forces actively support asadites, giving them superiority in the air. Ankara distributed MANPADS to militants and expects Patriot anti-aircraft missile systems from Washington, which we will discuss in detail told earlier. The risk of a direct clash between Russians and Turks is very high, so it’s very curious to see how high-ranking military and close circles evaluate this war and its prospects in Turkey itself.

As you know, in 2016 in Turkey there was an attempt of a military coup. She was unsuccessful, and President Erdogan remained in power, as reported, not without the help of Moscow. It's no secret that policy Islamization, carried out by a permanent leader, does not suit many in the country. The army was considered one of the foundations of “secularism” in Turkey, and after the defeat of the putsch it underwent a serious personnel cleaning.

Even Western diplomats note how the atmosphere in the Turkish army has changed dramatically after the suppression of the coup attempt. Last year, five generals involved in the Syrian direction immediately submitted their resignation, and only three of them were later recalled. President Erdogan then reassigned the six generals. Insiders call this "silent protest." But the retirees of the Turkish high command are much more harsh.

For example, ex-Admiral Turker Ertürk in an interview with a popular publication said:

It is unprofitable for our country to work against the Syrian central government and carry the burden of an imperialist indirect war. Of course, in foreign policy, you sometimes take actions that can be considered immoral, but with the expectation of profit.
The retired brigadier general Erdal Schener believes that Turkey today does not have a clearly formulated policy on Syria, and the “security zone” is an instrument of influence on the regional policy imposed by the USA. The former ex-admiral Ertürk is also inclined to consider Turkey a “proxy force” of Washington for conducting an indirect war against Russia. In his opinion, Erdogan drives Turkish soldiers to the slaughter for the interests of the United States and for the sake of increasing the popularity of his own party among the cheers-patriotic public. At the same time, the retired naval commander indicates that the Americans are actually betraying Ankara, since it cannot count on direct support from NATO if it starts a war against sovereign Syria.

Retired military leaders believe that it is in the interest of Turkey to withdraw its troops from Idlib. However, there is an internal conflict between the military and civil appointees of Erdogan, incompetent, but loyal to him personally. Among the Turkish command, dissatisfaction is ripening that civilians, who do not have a clear understanding of what exactly they want to achieve in Syria, and how exactly, impose their will on them and actually force them to cover international terrorists.

In general, from the “other side” everything is not easy either.
Ctrl Enter
Noticed oshЫbku Highlight text and press. Ctrl + Enter
We are
Why only Russian special forces will be able to liberate northern Syria
Ten "defeats" of Putin
Reporterin Yandex News
Read Reporterin Google News
Ad
The publication is looking for authors in the news and analytical departments. Requirements for applicants: literacy, responsibility, efficiency, inexhaustible creative energy, experience in copywriting or journalism, the ability to quickly analyze text and check facts, write concisely and interestingly on political and economic topics. The work is paid. Contact: [email protected]
17 comments
Information
Dear reader, to leave comments on the publication, you must to register.
I have an account? Sign in