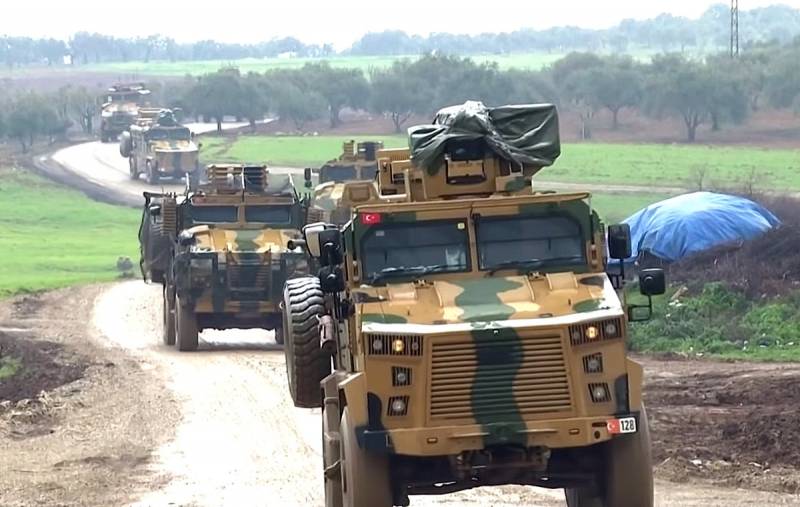 Last day the situation in Syria sharply worsened. President Erdogan switched from threats to their execution and actually launched an operation to “liberate” Idlib from the government forces of the SAR. However, the “blitzkrieg” was foiled, barely starting, with the help of the Russian Aerospace Forces. What will happen next: the real war of Ankara with Damascus and Moscow, or can the parties find a compromise?


The day before, with the support of Turkish artillery and special forces, the militants launched a counterattack on the Syrian army. The primary goal for them was the "liberation" of the village of Nairab, located near the capital of the province of Idlib. This locality was recently occupied by government forces of the SAR.

Initially, the actions of the militants were successful: they were able to knock out and capture several units of armored vehicles. However, then the "cavalry" appeared: the Russian Su-24 and Su-35S began to work, and the offensive choked. VKS of the Russian Federation destroyed machinery terrorists, and the Syrians were able to knock out several units of Turkish armored vehicles. After Moscow officially notified Ankara that the Turkish artillery was fixing fire by observers, it was discontinued.

So, an attempt to resolve the issue by force on the move in Turkey failed. What next: the parties will sit at the negotiating table, or will they begin to escalate the conflict further?

As we noted earlier, Ankara drove into Idlib a very serious seven thousandth group by local standards with two thousand units of armored vehicles. If this force instead of the “barmalei” goes on the offensive for real, then the result will be completely different. Turkey can dramatically reduce the combat capabilities of the Russian Aerospace Forces by cutting off its supply through its straits.

Yes, according to the Montreux Convention, this can be done only in the event of an officially declared war, but in reality, the Turks can create for the "Syrian express" going through the Bosphorus and Dardanelles the maximum unfavorable regime. As the saying goes, there would be a desire: it is possible to arrange queues in the straits, networks will be wound on ship propellers, ships can “accidentally” collide, etc. Turkey may also close its airspace for Russian aircraft. It’s necessary to fly bypassing through Iran, but with the help of air support alone you won’t be warring for a long time. In addition, the militants began to actively use MANPADS against Russian aviation in Idlib. Ankara very meaningly asked the United States for help in the supply of Patriot air defense systems. In general, ignoring Turkey’s interests in the region would be extremely imprudent.

On the other hand, the allies are also very belligerent. Damascus promises to completely clear Idlib and Aleppo. Syrian authorities warn that a direct operation by Turkish troops against government ATS will be regarded as a declaration of war. Note that neither the United States nor the NATO bloc are prepared in such circumstances to fight in Idlib. It is gratifying that the Russian Aerospace Forces did not sit back, quickly coming to the aid of the Syrians, turning the tide. And on February 19, strategic Tu-22M3 bombers escaped from Russia, accompanied by fighters, which for several hours defiantly flew over the Black Sea.

The question of the future north of the SAR is very difficult, since it calls into question all the previous achievements of President Erdogan. Initially, his ambitions seemed to extend to all of Syria. Then the “lip” had to be “rolled up” and confined to the province of Idlib. However, Turkey did not fulfill its obligations to demilitarize it, so the allies had to resolve the issue with terrorists by force. In fact, the Turks lost more than half of their "conquests" in Idlib.

Judging by the comments leaking into the press, Moscow suggested that Ankara limit itself to a small buffer strip along the border to protect against Kurdish armed groups and create something like a “ghetto” in the image and likeness of the Gaza Strip. President Erdogan was not enthusiastic about the idea, and he tried to turn the tide with the hands of the “barmaley”. Did not work out. Now everything will depend on whether Turkey is ready for a real war, having been officially declared an aggressor against a sovereign state?

Judging by the conciliatory statements, Ankara does not want to go so far. The Turkish Minister of Defense even outlined the conditions for the withdrawal of his troops from Syria:

There will be a constitution, legitimate elections will be held, a legitimate government will come, a democratic state will appear, then everyone will take all the places, and we will do it. When there is a democratic leadership, then Turkey will quit.

In some ways, it resembles the “Minsk format”, about which we wrote on the eve. Perhaps the parties can still come to some kind of consensus, without bringing the matter to great bloodshed.
Ctrl Enter
Noticed oshЫbku Highlight text and press. Ctrl + Enter
We are
Ukraine from the inside: traitors, curators and those who watch from the Kremlin
Ten "defeats" of Putin
Reporterin Yandex News
Read Reporterin Google News
14 comments
Information
Dear reader, to leave comments on the publication, you must sign in.