Check for lice: what Ukrainians showed in the face of coronavirus 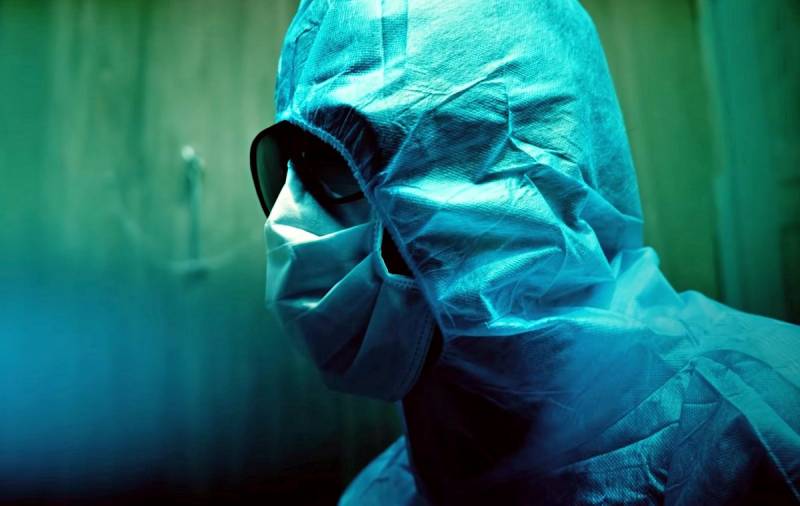 The 2019-nCoV Epidemic Not only Harvests Ruined Human Lives and Colossal Damages economies almost all countries of the world. In fact, the outbreak of this disease was for humanity a serious test of its ability to respond to truly global threats and challenges. And at the same time - a test for such things as humanity, unity, readiness for self-sacrifice and practical embodiment of all those high principles and values ​​that are so much loved today from various stands.


Already now it is safe to say that some countries cope with this test with dignity, while others failed it with a bang and universal shame.

The party said: “It is necessary!”, All of China replied: “Yes!”

If someone, deciding to inflict a Celestial Empire with the help of sabotage, the weapon of which was the coronavirus (and I continue to be fully confident that this was the case), expected not only to achieve maximum damage to the country's economy, but also to undermine it political foundations, then he miscalculated deeply. According to the estimates of the vast majority of international observers and experts, the people of China are simply demonstrating incredible cohesion, diligence and discipline, and its authorities are the highest pilots of what is commonly called “crisis management” in our time. All this allows us to make an unambiguous conclusion: Beijing made all the necessary conclusions from the events of a decade ago related to the onset and spread of the SARS epidemic in the country. Then many problems were caused by an attempt by the local authorities in Guangdong, which became a source of infection, to hush up what was happening or, at least, to present the SARS outbreak as a “shallow and local problem." Reliable information was not received in the capital for several months, and, by and large, the epidemic was talked loudly only when it broke out of China. Generally speaking, the extremely unsuccessful fight against “SARS” became a very painful blow to the pride of both the government of the Celestial Empire and the ruling Communist Party there. Not without “personnel organizational conclusions”, the most stringent and at fairly high levels. However, the main thing is that the appointment of the guilty and their approximate punishment did not end. Judging by what is happening this time, the deplorable situation of 2002-2003 was "disassembled", analyzed and became the basis for developing completely new approaches and strategies.

What do we see today? The next attempts by local reinsurers to "put a handkerchief on the human mouth" (on January 1 in Wuhan 8 bloggers were arrested at once, who began to sound the alarm about a new illness), were stopped "from above", and in a most cruel way. The whole world does not cease to be amazed at the unprecedented openness that China is currently showing in providing information about what is happening in the country (a policy for Beijing, you see, is unusual). Correspondents of the Wall Street Journal, who were thrown out of the country and wrote an article in their publication, in the title of which called China “a real Asian patient,” and even deigned to speak scornfully of his efforts to combat the epidemic - this is an exception, not the rule. As well as the strict suggestion made by the Foreign Ministry of the Celestial Danish edition of Jyllands-Posten, who decided to "fast" and printed a caricature on which the stars on the flag of China were replaced with 2019-nCoV molecules. Well, the Chinese comrades do not understand the “high standards” of Western journalism, which are increasingly coming closer to bestial humor a la Charlie Ebdo ... The rest is publicity, unprecedented for China. On the other hand, it is precisely Chinese discipline, the readiness with ant stubbornness to “collapse with the whole world” to make it seemingly completely impossible. To build a hospital in a week by the best international standards? No problem! Already done! To organize a quarantine such that with all the Chinese crowdedness, the mouse does not slip? Do not be so kind as to worry - not like a mouse, the fly will not slip! The point here is that literally from the very beginning, the entire leadership of the country, headed by Chairman Xi Jinping, took on the full coordination and organization of actions in the current emergency. No panic, no bedlam - everything is clear, everything is organized. Doctors, by the way, are sent to work in Wuhan, full of deadly virus, voluntarily. And it’s not at all behind the “long yuan,” but because the Motherland and compatriots need it so much. With such a people and government, China has a chance to survive even the Apocalypse.

At the same time, desperately boasting of its “patriotism” and commitment to “universal and European values,” our neighboring country was “uncumbent,” the chances of which are to face the 2019-nCoV epidemic are scanty due to its geographical remoteness from China and open provinciality, revealed to the world completely unprecedented examples ... In truth, it is extremely difficult to express what exactly, while adhering to censored vocabulary. This is not even breaking through the next level of the “bottom”, which some especially alternatively gifted individuals with Ukrainian citizenship have long surprised no one. This is generally some kind of Middle Ages! Not only that, Kiev deigned to take its compatriots out of Wuhan, which was gripped by the disease, almost the last of all the states whose citizens were there. The plane with these unfortunate people was forced to circle for hours over suddenly alien and inhospitable native land, since no local airport wanted to accept it! The first time it was possible to land only for refueling, since the liner tanks were already completely empty. For comparison, when the same flight landed in Kazakhstan in order to return one of the inhabitants of this country home, there were not the slightest excesses there. Flowers and orchestras, as far as is known, were not observed - but also crowds of brutal human-like, threatening to kill anyone who leaves the plane, too. It should be emphasized that among those who arrived there are not only infected, but even those against whom there is even the slightest suspicion of the presence of coronavirus! The only Ukrainian who caused concern, Chinese doctors immediately quarantined in Wuhan. And, nevertheless, all of Ukraine rose in a single rush, portraying the classics: “I won’t let it go!” Most clearly, as usual, “made” Lviv. The very one whose inhabitants, considering themselves to be a "moral elite" and "guardians of the foundations", undertake to teach compatriots for any reason and without it, especially regarding "fraternal unity." There, local patriots blocked the roads and blocked ready for arson tires, not only the road to the airport, but also the entrance to the local hospital building.


At the Vinnik hospital in the Lviv region, where the arrivals were supposed to be taken, the medical staff, who learned that they had "passed this cup," not only sobbed on each other's chest, but, in a fit of ecstasy, arranged a group performance of the Ukrainian anthem. Doctors ... "Shining to others, I burn myself ..." The oath of Hippocrates ... In Ternopol they prayed fervently, in Kiev and Poltava they were preparing to burn tires - in a word, Ukraine opened its arms for its sons and daughters, who escaped from the epicenter of the epidemic so widely as soon as I could. At the same time, again, one cannot fail to notice: the measles epidemic raging in the country, killing mainly children, as well as the news that most psychiatric and tuberculosis dispensaries will close in the country on April 1 this year, and their patients will simply be sent to eyes look, the inhabitants of the "uncovered" at a similar explosion of emotions and not nearly moved. But in the town of Novye Sanzhary, in the Poltava region, it came to a real battle. Buses with tow trucks threw stones at them, breaking half of the windows in them, and even tried to set fire to them, or to block the way of transport with a huge bonfire that was barely put out. It came to the use of a crowd of armored vehicles against the furious and lost human appearance - they managed to break into the sanatorium intended to accommodate Ukrainians taken out of China only under its cover and with the participation of dense columns of the National Guard. About a dozen police officers received injuries during the “communication” with the local population, and the “protesters” also suffered fairly. Some local media even wrote about the dead, but so far this information has not been confirmed. As of the current moment when this article is being written, the refugees seem to have been placed in a sanatorium, but the locals firmly promised to get there under cover of night and burn down the buildings with those who arrived from China. Those who evacuated from the first shock, evacuated little by little, share their impressions of the “cordial meeting” in social networks. One of the girls, who was in a bus smashed by stones, writes: “There is no thought: how to change nationality ?!”


The most remarkable thing is that there were already those who declared everything that was happening ... "part of the hybrid information war of Russia" in the "uncovered"! In particular, the Minister of Health, Zoryana Skaletskaya, said that the "spread of fakes about the coronavirus", which led to a cattle panic around the evacuees, is an "information attack on the Ukrainian Ministry of Health." Moreover, in the “aggressor country” everything turns out to be much worse, and medieval covens, such as those in Novy Sanzhary, were not in Tyumen due to the fact that “... only a suicide in Russia will protest in the city in which the troops are drawn, the Russian Guard and everyone else who wants to beat off the kidneys and break the bones according to the Constitution of the Russian Federation ... ”To discuss with such a useless. This must be treated ...

Regarding the real situation in our country, so far only one thing can be said: God has mercy. As of February 20, there are no cases in Russia, the border with China is closed tightly, test systems are available and are used wherever necessary. The only negative factor is the disappearance of medical masks in pharmacies in pharmacies and skyrocketing prices. Well, hopefully this will be sorted out. Undoubtedly, the operetta escape from the quarantine block of the Botkin hospital of St. Petersburg Anna Rybakova, who was placed there with suspected virus after returning from China, remains a bright moment. The fugitive with the help of the court was put in place, and even fined. In my opinion, a much smaller amount than it should. Here we can’t do without such wild antics! On the other hand, Russia against the general background of events in the world holds its “exam with coronavirus” so far with dignity.
Ctrl Enter
Noticed oshЫbku Highlight text and press. Ctrl + Enter
We are
“With Russians it’s worth playing fair or not playing at all”
Where is Russia going?
Reporterin Yandex News
Read Reporterin Google News
Ad
The publication is looking for authors in the news and analytical departments. Requirements for applicants: literacy, responsibility, efficiency, inexhaustible creative energy, experience in copywriting or journalism, the ability to quickly analyze text and check facts, write concisely and interestingly on political and economic topics. The work is paid. Contact: [email protected]
4 comments
Information
Dear reader, to leave comments on the publication, you must to register.
I have an account? Sign in