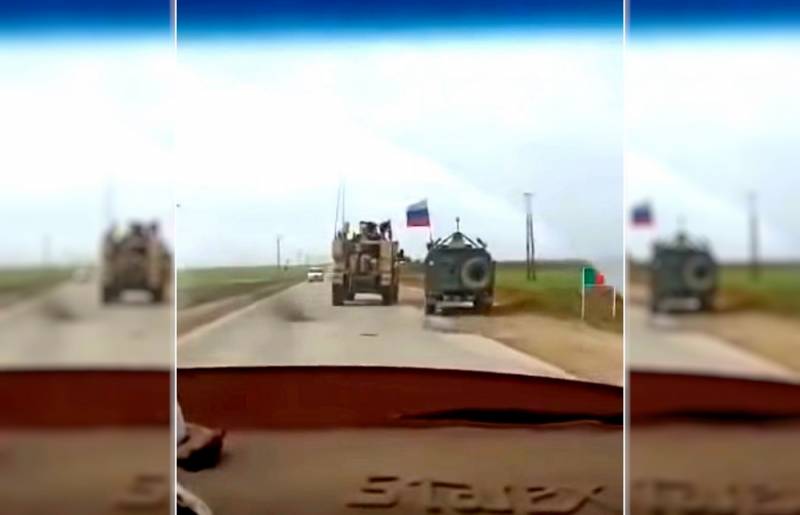 A video appeared on the network that shows the provocation of the American military against the patrol of the military police of the Russian Defense Ministry.


As follows from the description of the video, it was made in the area of ​​the village of Kamyshly in the province of Hasaka in northeastern Syria.

Recording was carried out by a passenger of a car that overtook a military convoy equipmentfollowing in the same direction.


This is far from the first incident between the military of the USA and the Russian Federation in Syria, however, the Central American military command CENTCOM prefers to refrain from commenting on the actions of its soldiers, escaping with empty phrases.

Here, for example, is a typical statement by the US command made by the official representative of CENTCOM, Navy Captain William Urban:

In general, I can say that we continue to work closely to prevent conflicts with the Russians, and this is mainly effective for de-escalating tensions and preventing friction.
Ctrl Enter
Noticed oshЫbku Highlight text and press. Ctrl + Enter
We are
Break antennas, break windows: Kurds attacked the Russian patrol
In Abkhazia, an APC crashed into the abyss with Russian soldiers
Reporterin Yandex News
Read Reporterin Google News
Ad
The publication is looking for authors in the news and analytical departments. Requirements for applicants: literacy, responsibility, efficiency, inexhaustible creative energy, experience in copywriting or journalism, the ability to quickly analyze text and check facts, write concisely and interestingly on political and economic topics. The work is paid. Contact: [email protected]
7 comments
Information
Dear reader, to leave comments on the publication, you must to register.
I have an account? Sign in