Yellowstone supervolcano reminds of itself again 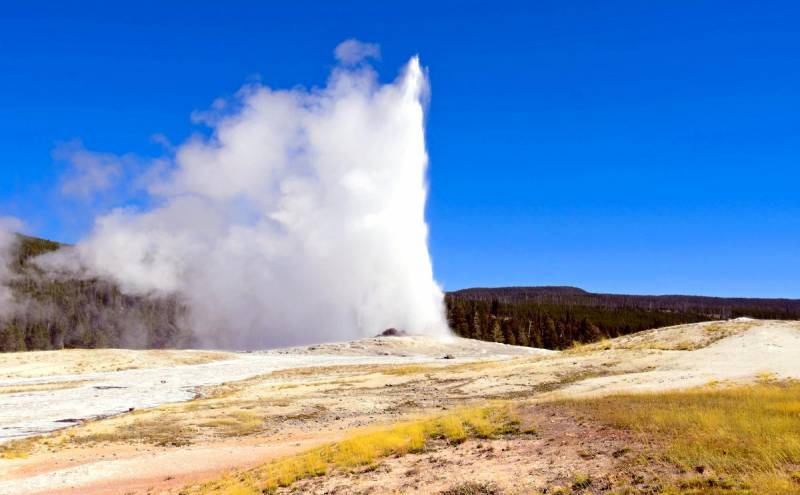 The Yellowstone Caldera is a North American volcano that poses a serious danger to the inhabitants of the entire planet, giving more and more reasons to talk about yourself. The super geyser under the speaking name “Steamboat”, located nearby, began to show abnormal activity, throwing a column of water to a height of 100 meters. Some experts attribute this to Yellowstone's awakening process.


What the world might face the eruption of a supervolcano, is widely known, thanks to scientific research and publications. It is a gigantic-sized caldera 55 by 72 kilometers, located in the northwestern United States of America. At a depth of many kilometers there is a huge chamber with a bubble of hot magma. Three eruptions of a supervolcano are known to science, and they passed with a certain frequency: approximately once every 600-700 thousand years.

About whether it is possible to expect another unpleasant surprise from Yellowstone, fierce discussions have been ongoing for many years. Optimistic forecasts estimate its probability at 0,00014% per year. However, there are other, more pessimistic opinions. For example, experts from the European Science Foundation called the figure large by several orders of magnitude - 10%. The objective reality is that 640 thousand years have passed since the last eruption, that is, we are located just in the middle of the time interval when peaks of volcanic activity occurred in previous times.

The United States, in whose territory the caldera is located, is continuously monitoring it. For obvious reasons, in the event of an eruption, they will get the first and most of all. In addition to a possible explosion of the crater itself, maximum damage should be expected from the waves of red-hot ash covering everything around the volcano. He is able to quickly reach the coast of the Atlantic Ocean, bombarding cities, roads and fields. In this case, American farmers should not count on the harvest.

But this will not only be their local problem: depending on the power of the explosion and the subsequent eruption of ash particles into the atmosphere, an analogue of the “nuclear winter” with a sharp cooling may occur on the whole planet. Subsequent conflicts between states over living space and resources then become almost inevitable. After Yellowstone, the world will never be the same.

There are other estimates, according to which the scale of the disaster will not be so all-consuming, but this, by and large, is fortunetelling on coffee grounds. For example, Michael Branny, a professor at the University of Leicester, says this:

Volcanoes do not erupt on a schedule or schedule, and the next major eruption may be far in the future, and the consequences will depend on the size of the explosion.

Now the process has become even more frequent, and over the past two years, “Steamboat” has already erupted 79 times. His strength also increased: the water fountain rises to 100 meters, that is, to the height of a 30-storey building. Some experts explain this with a large amount of meltwater in the soil, but others associate activation with an awakening caldera.

It is noteworthy that Yellowstone may well "bang" and from human hands. Some science enthusiasts suggest "cooling it" by pumping water into it through a pipe system. The project is estimated at 3,5 billion dollars. Skeptics point out that with such manipulations the supervolcano can explode even faster, like an overheated steam boiler.
Ctrl Enter
Noticed oshЫbku Highlight text and press. Ctrl + Enter
We are
Second Yellowstone: two supervolcanoes threaten to destroy the planet
Yellowstone Volcano Destroys Half America
Reporterin Yandex News
Read Reporterin Google News
7 comments
Information
Dear reader, to leave comments on the publication, you must sign in.