Gas Front: Russia was attacked from all directions 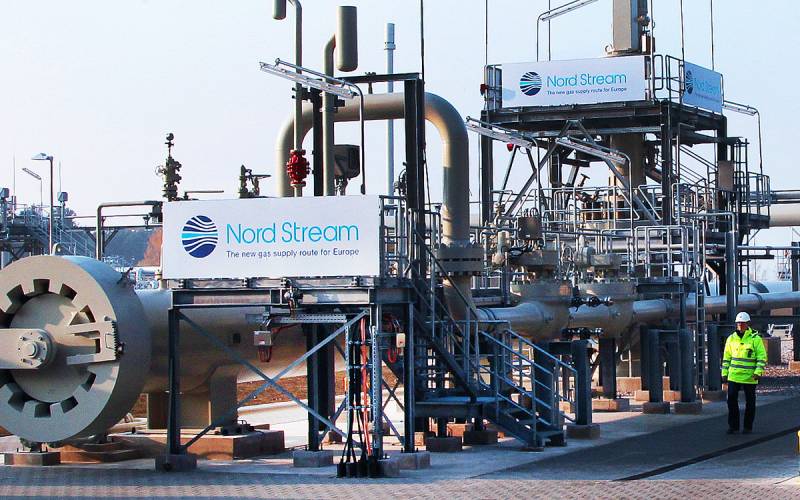 Problems with the completion of the Nord Stream-2 pipeline, the marginal drop in European prices for blue fuel, to put it mildly, is not the most successful transit contract with Ukraine - alas, all these unpleasant moments turn out to be just the "tip of the iceberg", which threatens economic stability not only of RAO Gazprom, but of Russia as a whole.


We have to admit - on the “gas front” of the global confrontation over energy markets that has developed in recent years, things are far from the best for us today. Moreover, the current troubles are most likely only the first in a chain of painful attacks, which, ultimately, can lead to the defeat of Russia in the world “energy war”.

Is the Chinese way a breakthrough or failure?

The commissioning of the Power of Siberia gas pipeline, which took place at the end of last year in a very solemn atmosphere, launched the first, in fact, major attempt to direct the flow of Russian “blue fuel” not to the traditional West, but to the East. It should be noted that in the domestic expert environment, this project from the very beginning caused far from unambiguous assessments, and not only optimistic forecasts were made regarding its future, as well as profitability and payback. Nevertheless, what has been done is done ... Alas, the latest reports from the Middle Kingdom make you wonder: were the skeptics right who said that this gas pipeline was exclusively political value, but in economic terms - doubtful? On February 18, the Ministry of Finance of China published a list of nearly 700 goods from the United States, which from March 2, during the year, will not be subject to protective duties that are a response to similar actions by the American side. Nothing, in general, unexpected - the Chinese comrades simply fulfill the obligations they made upon signing the January 15 agreement on the first phase of a trade deal with Washington, according to which US exports to the Celestial Empire should increase by $ 200 billion over the next two years . But no one expected that in addition to agricultural products (the main goal of Donald Trump during the conclusion of the armistice in the "trade war" was to save American farmers suffering huge losses), an impressive part of this amount will be the cost of energy from the United States.

By and large, Beijing was forced to “wind up” with our “Power of Siberia” precisely by the trade conflict that erupted in it with the United States. However, now, at the initial stage of normalization of economic relations, the Americans are determined to regain their positions in the energy sector of the Chinese market. According to reports, the Celestial Empire “subscribed” to an increase in the volume of purchases of their energy resources by 52 and a half billion dollars compared to 2017. Yes, in addition to LNG, this category also includes oil and coal, but it is no secret that the United States intends to focus on liquefied gas, with a clear goal - to become its main supplier to China in 2021. At the same time, it is planned to “move” not only Russia from the local market, but also Australia and Qatar, which traditionally felt good about it. Additional problems are also created by the completely unforeseen situation with the outbreak of the coronavirus epidemic, which significantly reduced China's economic activity, and, consequently, its energy consumption. Already, local energy companies are trying to abandon previously contracted volumes of LNG, citing the disease as force majeure. What will happen next? The question is whose exact supplies Beijing will decide to “cut back on.” The Power of Siberia has already been built and Gazprom is nowhere to go with it. But they are unlikely to want to spoil the relations with the Americans with such hard-won relations with the Americans, whom the Chinese comrades promised only this year to buy almost 20 billion more energy sources, in the Middle Kingdom. And at this time, Russia is already getting ready to build the “Power of Siberia-2” ...

By the way, a number of problematic issues have already arisen around the construction of this pipeline. Initially, the so-called “western route” for the delivery of Russian “blue fuel” to the Celestial Empire was supposed to pass through Altai. However, ecologists and simply representatives of the local population strongly oppose this. Again - construction in the mountains is still a “joy." Moreover, with the alternative option, the leadership of Kazakhstan was not slow to admonish. The Minister of Energy, Nurlan Nogaev, has already made a warm proposal: “Turn the pipe to us! It’s easier for you, the route is shorter, and since it’s so, at the same time we will gasify our East Kazakhstan and Pavlodar regions ... ”It is tempting, however, only in this way Russia is at a high risk of getting another“ transit country ”around its neck, which subsequently may begin to nerve-rack so that little will not seem to anyone, not only in Gazprom, but also in the Kremlin. The sad experience of “cooperation” with Ukraine is the best example of this. That's just, alas, far from the only one, even recently. Not so long ago, for example, Bulgaria’s state-owned gas supply company Bulgargaz dazzled Russian partners with a statement that its lawyers were preparing a request to the European Commission, which set out a demand ... to restore the antitrust investigation against Gazprom! Our dear (in the sense - expensive) "brothers" are very offended by Russia for "violating its obligation to adjust its energy price for Sofia in accordance with the average market prices in the European Union!"

So, they didn’t have time to get at their disposal at least some segment of the South Stream transit pipe (they really didn’t even complete it yet!), As they are striving to “stick” not only to him with vampire passion, as well as to our budget. The reincarnation of the AT.39816 case “Gas supplies in Central and Eastern Europe” performed by European bureaucrats does not bode well for Gazprom. However, putting new arrogant burials on your neck, whose appetites may well surpass Ukrainian ones, is also not an option. However, there is a more serious barrier to the South Stream. Speech, of course, about Turkey. The sharp deterioration in relations between Ankara and Moscow today may well be the reason for embarking on attempts to take advantage of the status of transit countries to the maximum. “So they themselves get gas from Russia?” - you are indignant. But don’t tell me ... That's the problem that over the past couple of years, Turkey has been on the path to a sharp decline in the volume of purchased Russian “blue fuel”. The record was set in 2017, when Ankara acquired 29 billion cubic meters of our gas, and after that the recession began. It became especially noticeable in 2019, when exports fell by 35% according to Gazprom estimates and by 40% on the Turkish side, even compared to the far from victorious 2018 year, amounting to only 15 and a half billion cubic meters. Gas from Azerbaijan, which Ankara is purchasing more and more willingly, and LNG from various sources, is “entering” our place. But what about “Turkish” and “Blue” “streams”? What is wrong with them !? The answer is extremely simple - the Turks want gas to be cheaper. Everyone begins to “want cheaper”, in friendly and passionate - it is worth only our pipeline to go through their territory. And how to deal with it?

Europe is difficult now, but could be much worse

However, all these moments could still be somehow experienced, if the situation prevailing on the most important market for RAO Gazprom today, the European one, would not have been alarming. The reduction in prices associated with an abnormally warm winter and other objective and subjective, but not global causes is also a fixable thing. However, there is reason to believe that in the not so distant future, our energy exports to the Old World can expect much more serious tests. We are talking about the intentions declared by the European Commission “to put an end to long-term gas supply contracts as such” and focus on “developing liquid spot markets”. A similar idea was put forward by Klaus-Dieter Borchardt, vice president of the organization’s energy directorate, during the European Gas Conference. The motives for this, frankly, completely unfavorable decision for our country, seem to have nothing to do with the desire to somehow infringe on its interests. Simply, according to Borchardt, the innovation proposed by him should "accelerate the process of rejection by the EU countries of all types of fossil fuels and achieve the goal of decarbonizing Europe by the middle of the century." In fact, the experts discussing this idea see a completely undisguised “selfish interest” here - it was not by chance that it “materialized” just when there was a clear oversupply of gas on the European market, as a result of which it was precisely spot gas prices that went down sharply, dropping up to 112 dollars per thousand cubic meters. Contract prices tied to the price of oil do not collapse at that rate.

I must say that this kind of "surprise" will be extremely unpleasant news not only for Gazprom, but for everyone involved in energy supplies to the Old World, including in the form of LNG. The United States literally last year concluded with European counterparties at least five long-term contracts for the supply of liquefied natural gas in an amount exceeding 30 billion cubic meters. It is unlikely to be happy with such an innovation in Norway. For pipeline suppliers, a complete rejection of the take-or-pay formula will be especially painful. However, for now it’s not worth worrying too much about this matter: after the overwhelming speech of Mr. Borchardt, the European Commission spokesman hastened to assure a rather agitated meeting that, despite his position, “Borchardt’s quotes should not be confused with the official position of the EC on this issue” . Maybe it will cost ... On the other hand, Europe striving to “turn green” by 2050 in one way or another will become less and less loyal to any fossil energy carriers. The gentlemen and ladies from Brussels, who were finally imbued with the ideas of "tunbergism," having finished with coal, will most likely take up gas. In any case, the first “symptoms” are evident - the European Investment Bank (EIB) has already set new conditions for receiving investments in energy-generating projects, which completely “knock out” gas power plants from among the potential investment objects of its funds. As far as is known, Brussels intends to exclude them from the list of objects whose operation meets the requirements of environmental protection. And that means it’s bad.

It is clear that the plans of the European Union by 2030 to make its energy sector a third “renewable” are more like dreams than reality. Nevertheless, one more threat should be kept in mind - speaking at the Munich Security Conference, US Secretary of State Mike Pompeo said in an open test that Washington intends to allocate at least a billion dollars for projects aimed at “reducing the dependence of European countries on Russian energy sources” . Are we ready to play at such rates? Does Russia and specifically Gazprom have something to oppose to such pressure and such investments? The questions are not idle at all - especially given our current, far from brilliant positions.

We are in Yandex Zen
It's important
5
Only China is the winner: “The Power of Siberia” will hardly pay off in 30 years
Western media: time to kill Putin’s favorite project is running out!
Reporterin Yandex News
Read Reporterin Google News
9 comments
Information