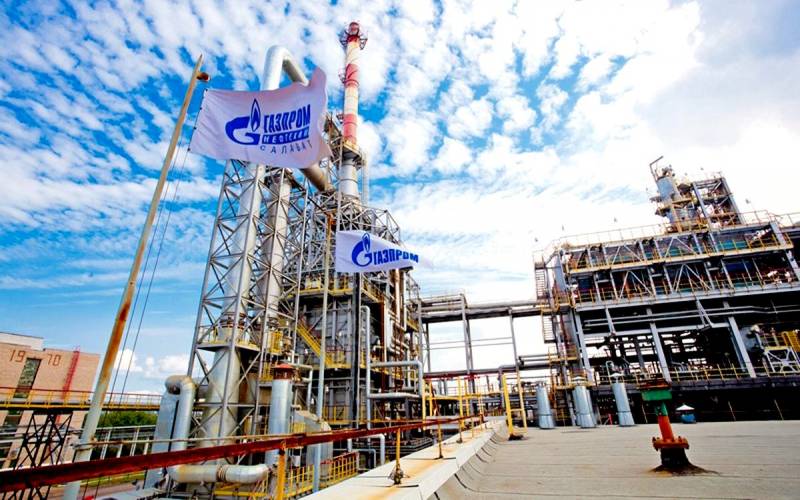 The “effectiveness” of Gazprom’s management is simply amazing. Having capitulated before the start of the “gas war” with Ukraine at the end of 2019, our “national treasure” came out of it not only with an enslaving contract, but also hung a debt of $ 8 billion to Russia as a state. A couple of months of dripping interest, and the "economic activity" of the top management of the state corporation will cost us all the cost of another Nord Stream-2, the payback prospects of which, by the way, are covered with fog.


We are talking about Ukraine’s claims for compensation for assets lost with Crimea. Naftogaz, along with the peninsula, lost 15 oil and gas fields, 3 promising areas, 1 underground gas storage facility, over 40 distribution stations and more than a thousand kilometers of the pipeline. After the referendum in 2014, all this property was nationalized and transferred to other owners.

In 2015, the value of the lost was estimated by Kiev at 1,15 billion dollars, but in 2017 it grew to 2,6 billion. Last year, when Russia and Ukraine were preparing for the “gas war”, Kiev’s losses increased to $ 5,9 billion. Toward the close of the outgoing year of 2019, Gazprom, which had pretty good positions, failed miserably to Naftogaz, falling into an extremely unprofitable bondage for the next five years. As a consolation to the cheer-patriotic public, it was reported that Gazprom had settled all legal claims against it.

As it turned out almost immediately, not all. The “ingenious” leaders of the state corporation preferred to take the issue of Crimean assets out of the picture so as not to hurt the subtle feelings of Ukrainian and European partners. Instead of solving at least one problem, they created a new one, where the Russian Federation will be responsible for them. And you’ll have to pay no matter what the “experts” say, who previously proved with foam in their mouths that Gazprom would freeze Ukraine, bring Europe to its knees and not pay a penny for the Stockholm arbitration penalty. Not frozen, not set, paid.

Now we are again comforted by stories that Russia will not have to execute the decision of the Hague Tribunal at all, since our country does not recognize its jurisdiction. Also, “experts” argue that if Ukraine did not recognize Crimea as Russian, then it does not have the right to demand protection of its investments. They ignore the fact that Kiev considers Crimea its "temporarily occupied" territory of Russia. They also like to give an example of a lawsuit in the case of the Yukos company, where the decision of the tribunal for a gigantic sum of $ 50 billion against our country was canceled.

In reality, everything looks much more pessimistic. The trial will be held in the West, the courts of which have already demonstrated in practice a clear bias in favor of Ukraine. Russia may not recognize the jurisdiction of the Hague Tribunal, but as they say, the sun rises in the east and sets in the west, regardless of our attitude to this. State assets abroad may become an object for the enforcement of the plaintiff's claim.

And do not forget who this plaintiff is. This is a Ukrainian company, and Gazprom’s pumping of gas to Europe directly under the new 5-year contract directly depends on Kiev’s services. For example, Nezalezhnaya can simply begin to take gas from a transit pipe for the appropriate amount of the tribunal's decision, and no one can do anything about it.

The reality is that the decision will be made with a high degree of probability in favor of Ukraine, and eventually you will have to pay in the end, as is the case with the fine of the Stockholm arbitration. All that remains is the question of the amount that our country will get due to the leadership of Gazprom. Apparently, understanding the objective situation, the RF Ministry of Justice announced its intention to challenge the size of Ukrainian claims for Crimean assets.

That is, we are talking only about some possible reduction in the obviously overestimated amount. But you still have to pay.
Ctrl Enter
Noticed oshЫbku Highlight text and press. Ctrl + Enter
We are
Gazprom turns from a “national treasure” into a “national disaster”
Kiev gas blackmail: brave Ukrainians did not take into account one moment
Reporterin Yandex News
Read Reporterin Google News
Ad
The publication is looking for authors in the news and analytical departments. Requirements for applicants: literacy, responsibility, efficiency, inexhaustible creative energy, experience in copywriting or journalism, the ability to quickly analyze text and check facts, write concisely and interestingly on political and economic topics. The work is paid. Contact: [email protected]
52 comments
Information
Dear reader, to leave comments on the publication, you must to register.
I have an account? Sign in