“Illegal state of the USSR”: why are Russia trying to “recapture memory”? 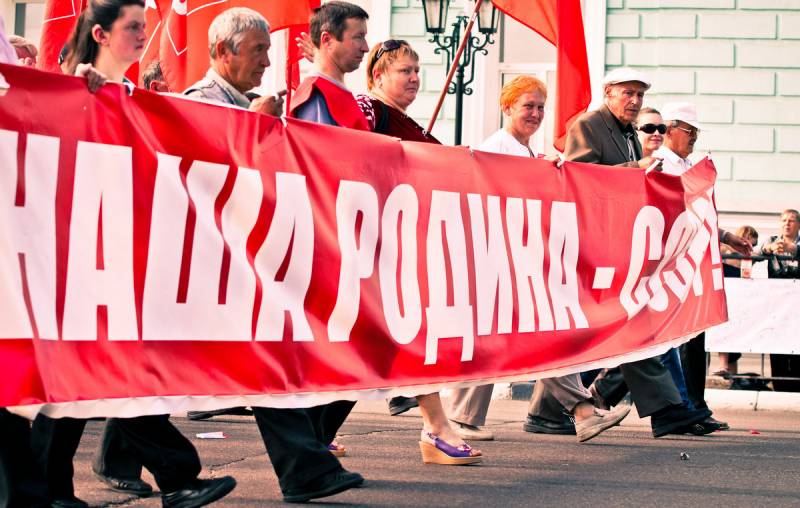 The flagrant demarche of the judge of the Constitutional Court, Konstantin Aranovsky, who allowed himself to express his dissenting opinion on one of the rulings of the Constitutional Court with rude attacks on the Soviet Union and declare that modern Russia should have nothing to do with this “illegally created country”, makes you think right away about a few very important things. First of all, about who and why it is so necessary today to turn us all into "Ivanov, who do not remember kinship," again injecting into the blood of the Russian people the poison of anti-Soviet condo?


It’s also the time to think about how long, in fact, the anti-state “fifth column” will feel completely safe and comfortable in our country. And, most importantly, until its representatives continue their stay in the most public positions, turning them into stands and horns for their own Russophobic rhetoric?

"Guardian of Russia?" No, her mortal enemy

It is entirely possible that it might seem to someone that Mr. Aranovsky, who pours out his bile and hatred on the USSR, which he calls “repressive-terrorist” and “illegal party-state power formation” only an anti-Soviet and anti-communist, but at the same time - an ardent patriot of today's Russia, today's Russia. This is by no means the case. What, if you think about it, does this figure, in my personal opinion, call upon his statements and actions to not only discredit, but completely discredit the high rank of judge? To ensure that our country does not consider and do not think of itself as "the successor of totalitarian power," that state that it "does not inherit, but only replaces with itself in its territory." In his conviction, the "guilt of the state of socialism" for its "unforgivable atrocities" is "immense and unbearable in the literal sense of the word." Moreover, he declares the Union of Soviet Socialist Republics not the state at all, but, as was said above, a kind of “power formation” created “completely illegally” ... According to Aranovsky, having renounced it, our country will not “bear the blame for Soviet repressions ", and (attention!)" to replace the Soviet state. " Well, well said a lot. An outstanding example of pseudo-legal casuistry. Why is it "pseudo"? Yes, because any true lawyer knows for sure: without duties there are no rights, without responsibility there is no inheritance. The Russian Federation does not and does not want to have anything in common with the USSR? Aranovsky, by the way, in all seriousness proposes to consolidate such a position legislatively and almost constitutionally, according to the experience of “civilized Germany and the Czech Republic”. Well, great - let's see what this could lead to.

If, God forbid, take for the program of action the appeals of a judge of the Constitutional Court who played an “accuser of totalitarianism”, then it should be considered that in 1945 the USSR “illegally formed” took and defeated Germany, which had absolutely legal and constitutional power. After all, the NSDAP and Adolf Hitler came to power not after an armed uprising, like the communists so hated by Aranovsky, but by the most legitimate means - as a result of the free and democratic expression of the will of the German people. Therefore, what? Please give Kaliningrad to Germany. With an apology and sharing, preferably. What's next for us? The legitimate authority of imperial Japan, rudely violated by the "red hordes"? Ay-yai-yay ... How bad it turns out! We take a saucer with a blue border and humbly bring Tokyo the Kuril Islands and what else did she manage to ... fool the Japanese in 1905-1907 the "legitimate authority" of the Russian Empire so adored by the judge judge. Well, we are their successors, it seems, according to Aranovsky it turns out? It is unlikely that it will be possible to return Finland and Poland “under the scepter” (especially with such “sovereign husbands” as our “hero”), but to pay reparations and indemnities to all kinds of petty trash screaming along our borders about “Soviet occupation” "Will have to be in full. In a queue to line up, with the same Warsaw at the head. And this is, literally offhand, the first thing that comes to mind. The fact that after listening to Aranovsky, it is necessary first of all to demolish the tomb of the Unknown Soldier and to erect monuments to the Vlasovites, I will not say anything - the language does not turn to develop this topic. Chur me, chur! And how to celebrate Victory Day now - after all, everything was illegal ?!

With whose voice is the “song”?

As is usually the case with our domestic liberal public (and Mr. Aranovsky to her after some sort of “coming out”, even write to the prophets!) So that she does not try to broadcast with pathos or without it, it will only be a repetition of “adult uncles” with Of the West. And there now sounds such a chorale on this particular topic - at least take out the saints. Here you are, The Economist:

Russia is trying to cling to a fake memory, since the present destroyed the USSR!

The author of the mentioned opus deals with a topic that would seem to be completely non-political - describes a sweet private museum in Novosibirsk, in which life and atmosphere of the very beginning of the twentieth century are recreated. However, the conclusions at the same time, the daredevil, makes simply furious:

The Communists, tearing to pieces the family history of Russia with their man-made disasters, destroyed so much in the country that even the imaginary past “catches” the Russians ...

Well, what is it for? And here's what:

Vladimir Putin is rehabilitating the USSR and Stalin, because he does not see the future of Russia!
- The Guardian already writes.

Everything is much simpler, more rude, more straightforward: “the evil and ugly dictator Putin” is engaged in the formation of a “new version of Russian patriotism based on the“ heroic ”and“ bright ”aspects of the Soviet past” solely to preserve its own eternal power! Didn't you know? So gentlemen the British will thoroughly explain everything to you! However, the pages of The Guardian completely pour out the soul and our, seemingly compatriot, Mrs. Irina Shcherbakova, presented as "co-founder of the organization" Memorial ". How this lady is nostalgic for the “holy 90s”! What hosanna sings to them! You can disobey ...

And about “millions of people who demanded freedom and democracy”, and then “every day they felt more and more alive and free”, recalls, and even about Tsoi with his “We are waiting for changes” ... Right now I’ll cry! True, the light-eyed Mrs. Shcherbakova did not stutter about what followed. About the destroyed and trampled country, about just these very millions of “living and free” people who later fought in a quagmire of poverty, hopelessness and horror of “perestroika”, about drug addiction, alcoholism, crime that soared dozens of times, it is silent. Well, as you can see, personally, so plebeian problems did not affect her in any way. But she deigns to argue that “terrible Putin” dares to call the collapse of the USSR “the biggest geopolitical catastrophe” of the 1989th century, flatly refusing to accept as the greatest achievements of mankind “the liberation of Eastern Europe, which took place in XNUMX, the fall of the Berlin Wall and the end of the Cold War ". What a nightmare - Russians today perceive these “great events” as “defeat”, “shame” and even betrayal! And all because “modern Russia has no concept regarding its future”, well, except for the conviction that we must stop repentingly crawling on our knees in front of the entire “civilized world”, but we should get up and go our own way, without looking at every minute him. This is horror, not a concept! Look what you’ve decided to get up ... Well, and so on and so forth. Bild:

Putin revives the cult of Stalin in Russia!

Chernobyl is a reminder to the whole world about how good it is that the USSR collapsed.

By the way, this familiar to us theatrical and life term literally translates as "the song of the goats." Well, this is so - by the way, I had to ... The goat’s chorus ..., excuse me, "denouncers of totalitarianism" does not cease, on the contrary - more and more voices are woven into it. Now - not just from Russia, but from the very tops of one of its authorities - the judiciary. Honestly, the fact that the Kremlin reacted to Mr. Aranovsky’s trick rather quickly, even surprised me somewhere. Could again "not notice." The reaction, however, is so-so - Dmitry Peskov declined to comment on this matter - they say the judge has every right to express his personal opinion. Well, at least he stated that Russia "is the legal successor of the Soviet Union, both de jure and de facto." Already bread. They didn’t keep silent - thanks for that. Although, in truth, venturing a constitutional reform of historical proportions, Vladimir Vladimirovich, right, might be worried about what “remarkable” cadres, it turns out, are in our Constitutional Court. On the other hand, it is quite possible that the whole reason for such a sharp speech by Aranovsky lies in the reform! According to the president’s proposals, as far as I remember, the number of judges in the Constitutional Court should be reduced, and decently - from 19 to 11. But are we really dealing with the most prosaic manifestation of a petty and selfish resentment against the government? Very, you know, maybe - our gentlemen are liberals, you just have to "take it for granted" - for a purse, for a post, for jamon with parmesan, they begin to roar so that any beluga will envy. Is it really ?!

However, be that as it may, the signal is more than characteristic. And he testifies that it is time for our authorities to finally decide. Moreover, in the style of the well-known not-so-decent joke about portals and a cross. Something needs to be worn, and something (or someone) should be removed hurriedly and categorically. A state that considers Victory Day its most important holiday, shrine and eternal pride cannot tolerate entities in the highest echelons of power that do not see anything in the past of our country but “unforgivable atrocities”, blackness and shame. Not categorically combined. Here it is - either one or the other. And the Kremlin seems to have less and less time for a final choice.
Ctrl Enter
Noticed oshЫbku Highlight text and press. Ctrl + Enter
We are
Ukraine from the inside: traitors, curators and those who watch from the Kremlin
Ten "defeats" of Putin
Reporterin Yandex News
Read Reporterin Google News
Ad
The publication is looking for authors in the news and analytical departments. Requirements for applicants: literacy, responsibility, efficiency, inexhaustible creative energy, experience in copywriting or journalism, the ability to quickly analyze text and check facts, write concisely and interestingly on political and economic topics. The work is paid. Contact: [email protected]
24 comments
Information
Dear reader, to leave comments on the publication, you must to register.
I have an account? Sign in