"12 steps in the Donbass": a plan that will lift European sanctions from Russia 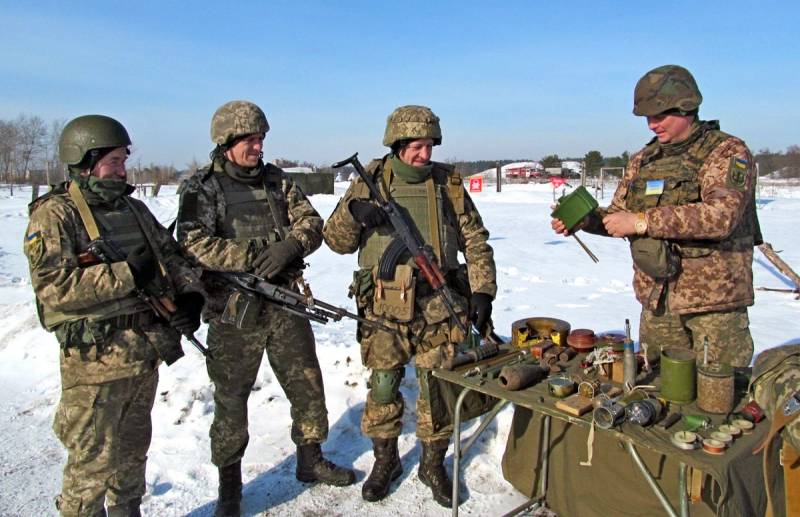 One of the main, perhaps, events of the 56th Munich Conference on Security, held last week in Germany, was the publication on the official website of the event a detailed plan before de-escalation of the situation in the East of Ukraine, which has already received the name "12 steps in the Donbass."


Its sudden disappearance literally a few hours after publication, and then a new appearance on the conference resource added even more intrigue around this document. What kind of plan is this that immediately provoked violent passions and intrigues, what is proposed in it and whom have these proposals brought to a state close to hysterical?

What is this actually about

The official title of the document, which we will discuss later, sounds something like: “Twelve steps to achieve greater security in Ukraine and the Euro-Atlantic region,” its authors are the so-called Euro-Atlantic Security Leadership Group , which includes dozens of experts from around the world. Including Wolfgang Ishinger, Chairman of the Munich International Security Conference, and Igor Ivanov, former Russian Foreign Minister. Characteristically, there are representatives of Kyiv among the developers of “12 Steps”: the former deputy foreign minister of Ukraine Oleksandr Chalyi, the former first deputy head of the OSCE SMM in Ukraine Oleksandr Khug and others. To assert that the question concerning her “national security” was resolved “behind her back” and without her participation, the “unfettered” one cannot in any case. By the way, in addition to the authors, more than 40 people who are considered recognized experts in international security issues - the heads and leading experts of various European think tanks, former diplomats and high-ranking military men - put their signatures on the document, expressing agreement with the provisions set forth therein. Some of the names on this list are, in truth, quite unexpected, such as, for example, an autograph of the former commander of the European Command of the United States Armed Forces and the Supreme Commander-in-Chief of the Allied Armed Forces of Europe in Europe (2013-2016) Philip Mark Breedlove. Now, actually, about the plan.

It consists, as you might guess, of exactly a dozen items, grouped into four blocks, concerning, respectively, security, humanitarian issues, economic и political topics. It should be noted that truly "breakthrough" ideas are contained in each of the blocks. So, as the first two steps, it is proposed not only the restoration of the Joint Center for Control and Coordination in Donbass, which at one time was so ineptly ditched by the Ukrainian side, but also the expansion of negotiations in the format of the Normandy Four by adding participants to military missions. Their goal should be not only to support the actions of the JCCC at the highest levels, but also to develop independent decisions on those issues that people in uniform should deal with. It is also proposed to significantly “expand and improve” the work of the OSCE Special Monitoring Mission (SMM), while simultaneously increasing the number of checkpoints on the demarcation line. The "humanitarian" section focuses on intensifying the search for missing persons in the conflict zone, as well as on reducing the number of tragedies associated with the use of antipersonnel mines by the parties. Kiev is ordered to finally develop a special program that includes a set of real measures to mine the Donbass. Also, the authors of the document, according to which there are a total of "more than 1200 radioactive sources" in the Donbas, pay special attention to ensuring the safe removal of those that have already become unusable and dangerous objects outside the region, as well as the organization of strict monitoring of the remaining ones.

However, the most significant points of the plan, which caused immediate hysteria in Kiev, and not only there (we will talk about this below), relate to the economic and, most importantly, political aspects of the settlement. At the Delphic Economic Forum, which is to be held in Greece on March 5-8, 2020, it is proposed to announce the launch of a global initiative to restore Donbass, and then organize an international donor conference, in which, as well as in the real revival of the region, it will take part Russia. Moreover, the authors of the plan believe that Donbass "should become part of a free trade zone with both the EU and Russia." However, even these unambiguously "seditious" thoughts for the Ukrainian side pale in comparison to other proposals contained in the plan. In short, we are talking about revising anti-Russian sanctions and lifting them as we move towards a real settlement in the region, about expanding cooperation between the European Union and our country in "areas of interaction" and "areas of mutual interest." If we ignore the casuistry, we are talking, again, about lifting restrictions on trade and joint projects. And also about the creation of a new "platform for substantive and permanent contacts of the foreign ministers of the" Euro-Atlantic states "and their departments" to resolve "key differences", of course - with the obligatory and full participation of Russia. Ukraine is invited to start no more, no less, as a "new dialogue on national identity." It should be held "taking into account the vision of the neighbors", and specifically - Poland, Hungary and Russia. The subject of discussion and "rethinking" should be "themes of history and national memory, language, identity and experience of minorities." Translating into human language - Kiev is ordered to appease the presumptuous ultranationalists and stop the policy of violent Ukrainization, as well as the glorification of Nazi criminals.

Who is for, who is against?

After such proposals, hindering the most tender and reverent feelings of the “patriots of Ukraine”, one could not expect anything but a scandal in their execution. This followed, and immediately. The first, quite naturally, the commotion was made unclear for what kind of a mug the ex-president of the “non-fallow” Petro Poroshenko who came to this event came to this event. Sensing an occasion for the next Russophobic demarche, he immediately began to assert that the plan was “written in the Kremlin” and “you can see what you see when you look into Putin’s eyes”! Yes ... But with the rich hallucinations, he gives the former head of Ukraine his favorite form of leisure. Right classic: "And the boys are bloody in the eyes!" Poroshenko immediately declared the “12 steps” as the plan of surrender of Ukraine, which “crosses the red lines”. The Ministry of Foreign Affairs of the Nezalezhnoy side joined him in a single impulse. There, however, they did not reach the analysis of the images in the eyes of Vladimir Vladimirovich, but simply stated that the theses contained in the document “did not correspond to the official position of the Ukrainian state”. At the same time, which is characteristic, both Poroshenko and the Foreign Ministry officials, while carrying out their attacks on the “12 steps”, tried in every possible way to emphasize that this was “an empty piece of paper” and not an official document reflecting the position of Europe or the West as a whole. So what are you so upset, heartfelt? As if with an awl you were poked into that unbelievable place with which you carry out “thought processes”? Well, a piece of paper, so a piece of paper - why break the spears ?! Nevertheless, as soon as the plan disappeared temporarily from the official website, the conference, Ukrainian diplomats began to trumpet about their "victory".

And Poroshenko did write all of Facebook with triumphant reports on how he heroically “thwarted in Munich a plan of attack on Ukraine developed by Russia”. We can say, prevented a new "Munich conspiracy"! This involuntarily self-righteous boast that makes us think about Delirium tremens sounds especially ridiculous against the background of the conference organizing committee's statement that the “12 steps” plan was hidden for some time due to “increased unhealthy attention and overly aggressive attitude” to it. Oh, people know how to beautifully express the meaning of the popular saying about a substance that should not be touched in order to avoid an unpleasant smell! That this is the case is fully confirmed by the appearance of the document on the same official resource and without any cuts, corrections and remarks. This was done immediately, as soon as the seething of "substance" somewhat subsided. A much more unpleasant moment in this situation is that almost immediately a “collective complaint” about the 12-step plan erupted in the odious American “analytical center” of the Atlantic Council. The statement, signed by former US diplomats and officials (in particular, former US ambassadors to Ukraine Stephen Pifer, William Taylor and Marie Yovanovitch), as well as experts from the “council”, is written in the “best traditions” of the old unkind Soviet propaganda, which, it seems that the public that eats up in this office so earnestly hates it. Noting "through the teeth" and clearly through force the "constructive nature of certain recommendations," signatories argue that at least two of them "completely repeat the Kremlin’s proposals for negotiations or the topic of misinformation." Yes, in my opinion, too - complete nonsense, but the quote is verbatim.

However, everything becomes clearer than clear, one only has to delve deeper into the text: “Russian troops captured and annexed Crimea” ... ”,“ Moscow launched a hybrid war in the Donbass ... ”,“ without the Kremlin leadership there would have been no conflict in and around Ukraine ... "Well, and so on, in the same very familiar to us all Russophobic spirit:" a conversation about the lifting of sanctions will be possible only after the implementation of the entire "Minsk" (that is, never). All this vicious hissing, and especially the speed with which they “gave birth” to Washington, irrefutably indicates that the United States does not take any steps - not a dozen, not a hundred, or a thousand dozen - to resolve the situation in the Donbass intend to. Equally, they do not intend to let anyone else take these steps - at least one of them. Consequently, there can be no question of any peaceful resolution of the conflict in the east of Ukraine, as long as this country remains a semi-colony of the USA. If only “semi” ... On the other hand, the best, perhaps, Moscow’s answer to all that’s happening can be considered the statement of the deputy head of the Russian Foreign Ministry, Alexander Grushko, made “on the sidelines” of the Munich Conference. One of its main meanings is the call for the European Union to abandon the counterproductive practice of obedient and non-rational following in the wake of Washington, or rather, its increasingly tightened anti-Russian policy. The “12 Steps” plan more than eloquently testifies that Europe is tired of the useless and, most importantly, completely useless in the foreign policy (and harmful in the economic) sense of confrontation with Russia. Her support for Kiev is far from being so unconditional and reckless as it was four or five years ago. Well, if Brussels, Paris, Berlin have enough political will to stop looking at Washington, the “12 steps” may well be the beginning of the road to Peace in the Donbass. Otherwise, they will turn into another set of good intentions, leading to all known addresses ...
Ctrl Enter
Noticed oshЫbku Highlight text and press. Ctrl + Enter
We are
Ukraine from the inside: traitors, curators and those who watch from the Kremlin
Ten "defeats" of Putin
Reporterin Yandex News
Read Reporterin Google News
Ad
The publication is looking for authors in the news and analytical departments. Requirements for applicants: literacy, responsibility, efficiency, inexhaustible creative energy, experience in copywriting or journalism, the ability to quickly analyze text and check facts, write concisely and interestingly on political and economic topics. The work is paid. Contact: [email protected]
14 comments
Information
Dear reader, to leave comments on the publication, you must to register.
I have an account? Sign in