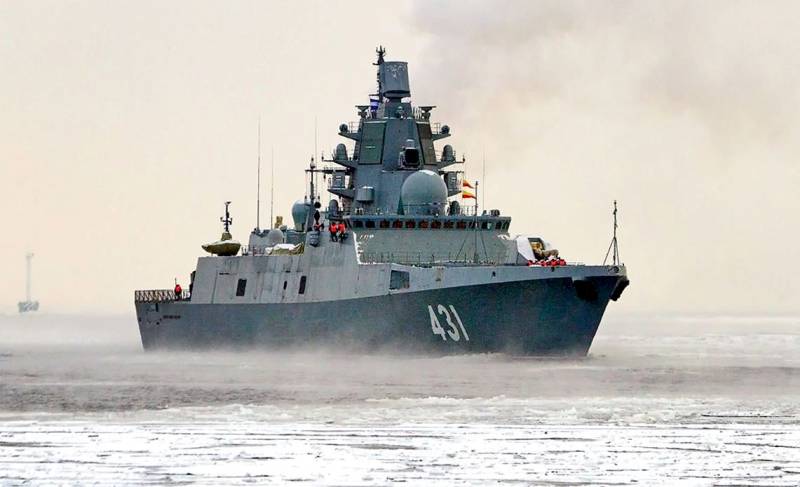 The other day, the Pentagon published a map of the increased military activity of Russia and the PRC, where our fleet was designated “blue” and Chinese — “red”. The study of this material leads to certain conclusions. If you carefully look at this document, it becomes obvious that we have a propaganda leaflet designed to knock out additional funds from the budget.


So let's get started. In their report to the U.S. Congress, the U.S. military issued a meaningful warning:

Our global competitors continue to build up their naval forces, and they expand their areas of operations and cooperation with each other. We just need to defend ourselves much more against increasingly capable naval adversaries who will challenge our economic security and even our lifestyle.

At first, The Pentagon notes the growth of military capabilities of the Russian Federation and China. And this is a fact: for example, the number of the Chinese fleet over the past decade has increased from 262 to 335 ships. Two aircraft carriers have already received the Celestial Navy, the third is being actively built, and new nuclear submarines are being added to the ranks. But there is one important nuance: all this power is mainly intended for actions in the native Asia-Pacific region, where China intends to defend its own national interests.

Judging by the picture of the Pentagon, Russia should be wary of it soon, because the Okhotsk, Chukchi and Bering Seas “reddened” on it. Regarding the activity of the Russian Navy, it also increased around our own shores, plus in the Mediterranean, where the allied debt led to support the Syrian Defense Ministry. The “attacks” towards the US east coast of domestic nuclear submarines can be considered rather a demonstrative gesture. Most of the “blue” in the Arctic region, where Russia intends to maintain its dominance on the Northern Sea Route. 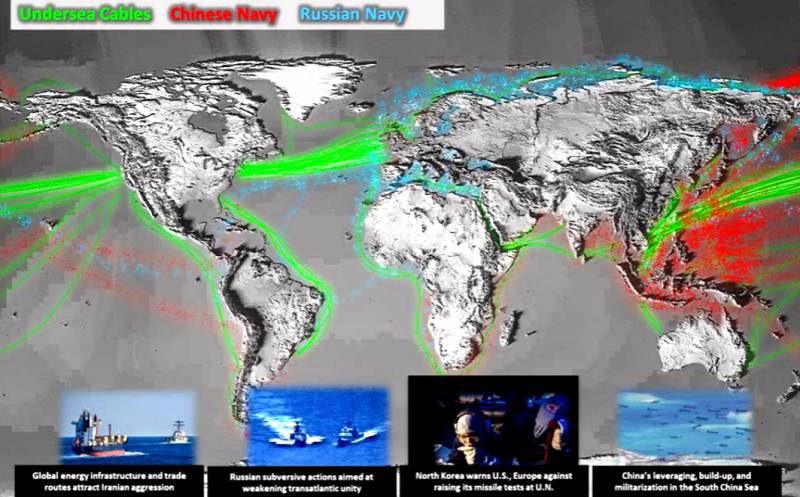 Map showing the revitalization of the fleets of Russia and China

Secondly, the report hints at some “joint operations and cooperation” between the Russian Federation and China. It sounds great to us, but the reality is that Beijing will hardly ever enter into a military alliance with Moscow, confining itself to a demonstration. But in the Pentagon's view, the truth does look meaningful and menacing.

Thirdly, both lousy about the bath, and the Pentagon is actually self-revealing, attributing to the Russian Federation and the PRC their own evil intentions:

Nearly all of the Internet and trillions of dollars in trade are made today through a largely unsafe submarine cable network.

The picture “green” shows underwater cables to which it is considered normal for American intelligence agencies to connect and remove all information from them. Now it is attributed to Russian and Chinese. As they say, on the thief and the hat burns.

However, not only trade through the Internet is so important for the United States, but also marine trade, as well as the possibility of its interruption by military means. However, the truth is that China holds 40% of all shipping, and 8 of the 10 largest container ports in the world are located in China. And this is the United States with its allies in the forces to block the main trade routes for the PRC, which forces Beijing to build up its Navy. In general, everything is turned upside down.

Finally, the thesis that Russia and China posed a threat to the American way of life was somewhat touched. It is as if taken from old propaganda leaflets. The times when the "evil communists" wanted to take everything from the bourgeoisie and distribute in fairness to the poor, are long gone. Today, both Russia and China are the same capitalist countries as the USA itself, and therefore do not constitute any threat to their way of life. But for the sake of a red word in the Pentagon, this formulation was nevertheless screwed.

The question is, why all this demagogy?

The answer is simple and simple: for the sake of money. The US military budget is already the largest in the world, and these are orders for corporations, payment for lobbying services, and a bunch of other "goodies" all involved in the exciting development process. Now, instead of one, two threats appeared at once - Russian and Chinese. The Pentagon’s defense budget has also grown naturally: from $ 738 billion to $ 740,5 billion.
Ctrl Enter
Noticed oshЫbku Highlight text and press. Ctrl + Enter
We are
Putin and Lavrov have done their job. General Shoigu, your way out!
Ten "defeats" of Putin
Reporterin Yandex News
Read Reporterin Google News
Information
Dear reader, to leave comments on the publication, you must sign in.