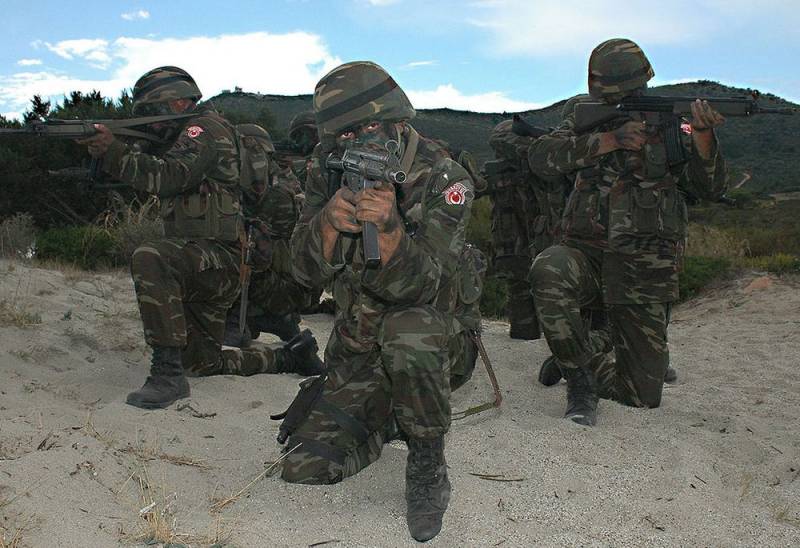 The Turkish Anadolu news agency is sounding the alarm that the Syrian Arab Army (SAA), after reaching the Astana and Sochi accords between Russia and Turkey, “captured” almost half of the Idlib “de-escalation” zone. The agency even burst into spectacular infographics, which it posted on its Twitter account to demonstrate the extent of the “Syrian occupation”.


According to infographics, over the past nine months, Syrian troops have been able to achieve serious success. They liberated significant territories from the militants, occupying a number of large cities, including Sarakib, and achieved almost complete control over the M5 strategic highway, which runs across the country from south to north.

Anadolu clarifies that as a result of the advance of the SAA and their pro-Iranian allies, 5 of the 12 observation posts of the Turkish army (provided for in the Sochi accords of 2018) in the Idlib de-escalation zone were inside Syrian-controlled territories. At the same time, part of the Turkish military “observation posts” that the Turks established without any coordination with Russia turned out to be blocked. 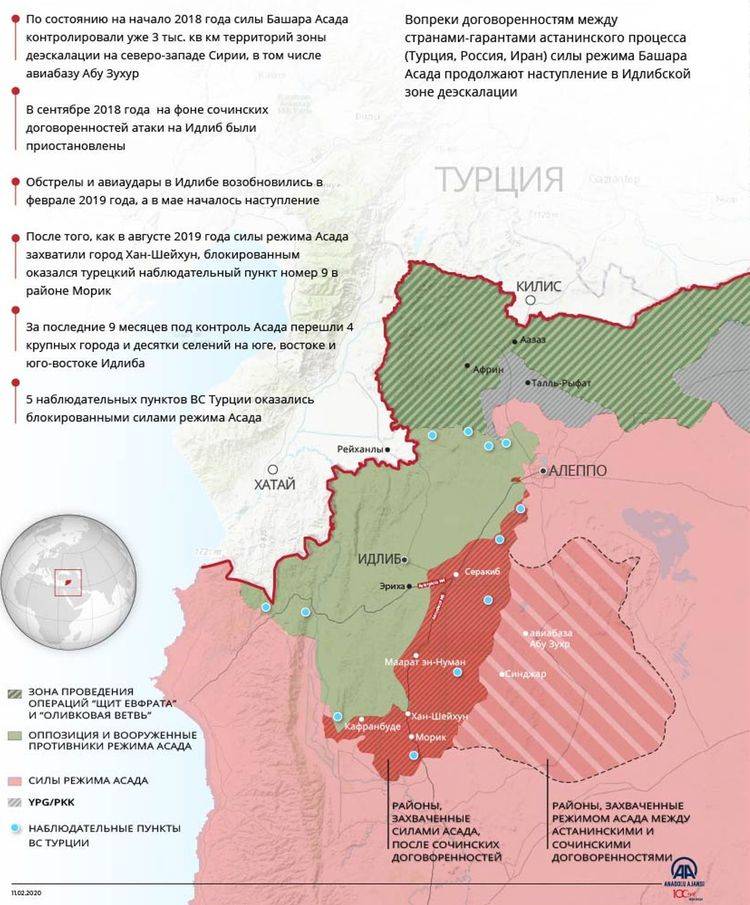 It should be noted that the infographics from Anadolu are already out of date. Since the SSA has already completely liberated a piece of the M5 highway on the Hama-Aleppo section and the adjacent territories from the pro-Turkish “barmalei” -wahhabis and “moderate” “opposition” terrorists.

The Syrian regime can really pay attention to Afrin (the western part of the "Syrian Kurdistan", which since 2018 has been controlled by pro-Turkish militants and the Turkish army - ed.) After taking the center of Idlib
- Gurjan worries.

Turkey is trying to force Moscow to organize new armistice talks in Idlib. Once this is done, she plans to ask Russia for guarantees that the Syrian regime will allow Turkey to maintain its military presence in Afrin, as well as in the area of ​​Jerablus, Al-Rai and Al-Bab
Gurjan added.

Turkey has no choice but to increase its military presence in Idlib in order to put pressure on Moscow to threaten the lives of Turkish soldiers
Gürjan summed up.

By the way, according to information from London from the local NGO puppet Syrian Observatory for Human Rights (Syrian Observatory for Human Rights), at present Turkey has transferred 1,5 trucks and tractors to the Idlib de-escalation zone technique, personnel and various property. There are already about 9 thousand Turkish military men with tanks, armored vehicles, artillery and MLRS.

It should be added that on February 8, 2020, negotiations began on Ankara to de-escalate the above conflict. However, the Turks thwarted the negotiation process. They accused the SAA of shelling and began to attack the Syrian government forces, allegedly in response. Although it is obvious that their own Turkish fighters were engaged in "timely" shelling of the Turkish military. The Turks really do not want the SSA to liberate the Syrian city of Idlib from the militants in the province of the same name. Therefore, it is not surprising that Recep Tayyip Erdogan regularly announces yet another threat to Damascus.

At the same time, according to Sky News Arabia (UAE), on February 12, 2020, regular Turkish reinforcements crossed the Syrian state border and went to the western regions of the Syrian province of Aleppo. They are going to organize another group of "observation posts" to impede the advancement of the SSA and the liberation of territories from militants. One of these “observation posts” will be located on the road between the settlements of Atarib and Al-Jin.

At the same time, the head of the Turkish Ministry of National Defense, Hulusi Akar, said that the Turks would not leave the “observation posts” that were in the territory controlled by the SAA.

We have said many times that we will not withdraw our personnel, soldiers, from there. They will continue their mission
he said in an interview with the Associated Press.

In the event of any action against them, they were instructed to respond even harder
- emphasized Akar.

At the same time, Turkish President Erdogan has already threatened that in the event of new attacks on the Turkish military, he could violate the agreements reached with Russian President Vladimir Putin on Idlib. After which the Turkish army will launch a full-scale attack on the SAA.

We will shoot everywhere, without being connected by the borders of the Idlib and Sochi memoranda if our army is damaged
- assured Erdogan.

In addition, according to Erdogan, most of the attacks by the SAA and Russia in Idlib were directed against civilians, and not against terrorists. So Turkey "is determined to drive out Assad’s troops outside the de-escalation zone."

In turn, the Russian Foreign Ministry has already stated that all strikes are carried out exclusively against terrorists. At the same time, Russia considers the actions of the Syrians in Idlib to be absolutely legitimate.

Syrians are fighting terrorism in their territory, in their country
- emphasized in the Russian Foreign Ministry.
Ctrl Enter
Noticed oshЫbku Highlight text and press. Ctrl + Enter
We are
Syrian troops show militants in Idlib ultimatum
“Now we are on our own”: Erdogan accused Russia of violating the agreement on Syria
Reporterin Yandex News
Read Reporterin Google News
4 comments
Information
Dear reader, to leave comments on the publication, you must sign in.