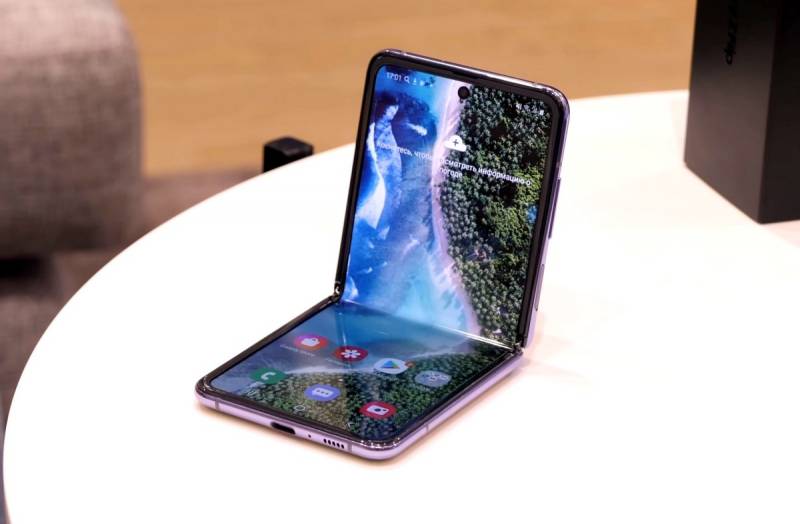 The South Korean brand Samsung on the eve showed another model of a flexible smartphone called Galaxy Z Flip. Unlike last year Galaxy fold, the new device is not folding vertically, but horizontally, resembling an old-school “cot”.


In order not to repeat the opportunity that happened with the first version of the “butterfly”, the Z Flip screen was equipped with an ultra-thin protective glass instead of a plastic film. At the same time, the 6,8-inch Dynamic AMOLED display received all the characteristics of modern flagships, with the exception of the 120 Hz update.

On the back of the top flap of the smartphone there is a miniature screen that allows you to receive notifications when the device is folded, and even take a selfie. The fingerprint sensor is located on the side frame.


Still new and expensive technology manufacturing flexible displays made the manufacturer to be more modest in terms of characteristics in order to somehow squeeze their brainchild into an “acceptable” price category. As a result, a unique clamshell was equipped with last year's Snapdragon 855+, 8 GB of RAM and 256 GB of physical memory. The main camera received 2 modules of 12 megapixels, the front - 10 megapixels. The battery capacity is only 3300 mAh.

However, no matter how hard they tried to “save” at Samsung, the price of the Galaxy Z Flip was not available. You can buy a smartphone for about $ 1380, which is comparable to the iPhone 11 Pro Max. However, if you compare the new product with a similar Motorola RAZR gadget, which is significantly inferior in characteristics, the latter will cost you 100 more.
Ctrl Enter
Noticed oshЫbku Highlight text and press. Ctrl + Enter
We are
Samsung will have a 13-inch flexible tablet
Samsung presented a revolutionary bendable Galaxy Fold
Reporterin Yandex News
Read Reporterin Google News
Ad
The publication is looking for authors in the news and analytical departments. Requirements for applicants: literacy, responsibility, efficiency, inexhaustible creative energy, experience in copywriting or journalism, the ability to quickly analyze text and check facts, write concisely and interestingly on political and economic topics. The work is paid. Contact: [email protected]
Information
Dear reader, to leave comments on the publication, you must to register.
I have an account? Sign in