"Moscow is the main enemy": the United States will not spare forces and funds to fight Russia 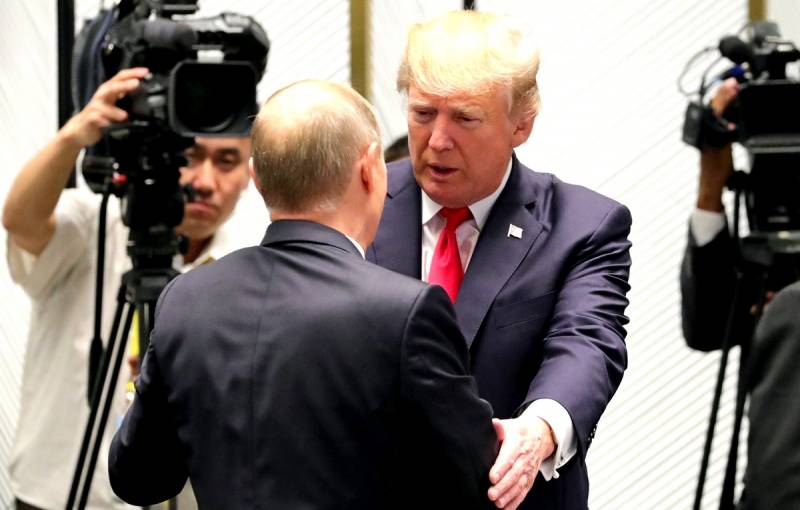 In a budget request for 2021 published on the White House's official website, the US president proposes to allocate more than $ 700 million to the United States “allies” to confront Russia. China is also mentioned in this document - as one of the "resurgent competing countries that challenge American values." But our country is still the main enemy. Washington has absolutely no intention of curtailing its efforts to remain the only “leading and guiding" force both in the present world and in the world of the future, which should be built solely on its patterns.


We could again repeat the erased thesis that “an undeclared war” is being waged against our country, if not for one completely obvious thing: this war was declared openly and loudly! No one in the West has long been trying to hide either the very fact of its conduct, or the methods and techniques that are being used. Do you still not believe? But they still come to you ...

"Petrel" from the State Department

In the financial project I mentioned above, hundreds of millions of dollars are planned to be allocated specifically to “the countries of Europe, Eurasia and Central Asia.” These funds should go, first of all, to "strengthening their territorial integrity, common security." A separate line is the cost of supporting the efforts of the "US partners" in the noble cause of "completely abandoning Russian-made military equipment." And also - help in overcoming their "dependence on energy supplies and in the trade sector." Dependencies, of course, on our country, although China is certainly implied with regard to trade. By the way, does this list cause any associations? In fact, this is simply a complete listing of the regions where the head of the US Department of State Mike Pompeo visited not so long ago. With very fruitful visits, it should be noted ... That Minsk showed commendable prudence, and not only in the process of the arrival of the "distinguished guests", before whom the head of state personally did not get tired of crumbling in praises and expressions of warmest feelings. For the United States, a much more important indicator that Belarus is ready to follow the “right” course is the actions of Alexander Lukashenko during the negotiations in Sochi, which seem to be another nail in the coffin of the Union State. Well, of course, the ongoing anti-Russian demarches of Alexander Grigoryevich, from which it will soon be possible to compose a whole quote. There, on the eve, during a meeting with representatives of state-owned media, he again reproached certain "representatives of the Russian government" for "fierce hatred" for his country.

Lukashenka’s rhetoric and actions towards Moscow are getting tougher, and therefore the State Department’s statements for Minsk are still entitled to “gingerbread”. Well, that is, the lack of a whip. The local "opposition", which the overseas visitor did not fail to meet, somehow immediately quieted down and today is conducting its traditional attacks on the "father" without enthusiasm, without a spark. This is understandable - there is no corresponding command yet. But in Central Asia, Mr. Pompeo, it seems, was not understood. But how the Secretary of State tried in the same Tashkent! And he lavished praise on Uzbekistan for "significant success in reforming civil society, protecting freedom of religion, human rights and freedom of speech." And "the country's great efforts to achieve peace in Afghanistan" appreciated ... In an open text he promised to throw a million on "development economic ties "with Kabul, and even promised to help" reform the tax and financial sector "in accordance with American requirements. Well, downright an attraction of unheard of generosity! And in return, he asked for "sheer trifle": to join the anti-Chinese coalition, which Washington hastily cobbled together in Central Asia. Mountain to stand up for the "oppressed Uyghurs" and all the others whom the Americans recorded as "Chinese victims of repression". They didn't understand ... They didn't appreciate the generosity of the offers made from overseas, didn't think about the possible consequences. Minister of Foreign Affairs of Uzbekistan Abdulaziz Kamilov responded to the guest's hot appeals in an oriental calm but adamant manner, saying that Tashkent wants to see its region exclusively as a territory of "stable development, prosperity and cooperation." And they do not at all want to “feel unfavorable political the consequences of rivalry, "which may unfold in it" between major powers. " In a word, he made it clear that Uzbekistan does not intend to participate categorically in games against the Middle Kingdom.

All the same methods for the rebellious

Presumably, Pompeo faced about the same reaction in other Central Asian capitals he visited. They argue there with the utmost pragmatism inherent in people of the East: the Americans with their big money is, of course, good. But it’s too far away. But China is nearby. And, by the way, he has practically no less money. And so much of it has been invested in the economies of Central Asian countries that now it can be very fraught with the local elites to start making some movements directed against Beijing. As usual, no one is going to take all these arguments seriously in Washington. Literally a few days after Mr. Pompeo left Kazakhstan, clearly not receiving everything he hoped for, riots broke out in the country. And you can say as much as you like that what happened in Masanchi was simply an abscess of long-standing contradictions and problems that broke through with blood, but due to the fact that one of the sides of the confrontation, which had a completely clear interethnic character, was just the descendants of immigrants from China who retained ties with historical homeland, not to go anywhere. As a matter of fact, no one is trying to remove the blame from the local authorities or law enforcement officers, who "slammed" the escalation of everyday, seemingly, scuffles into a general massacre and to attribute all the blame for the tragedy to some "CIA agents" or the same State Department, who personally incited and kindling. However, it is hardly reasonable to declare the incident in Kazakhstan, which led to human casualties and the mass exodus of some of the local residents beyond the cordon, only as local social troubles or, even more so, as a fatal coincidence.

Too quickly and unanimously picked up the topic of what happened, it was not just the Western media, but those that had not even been trying to conceal their own belonging to the number of weapons of the information war for a long time - like Radio Liberty or Voice of America. And they at once spread what happened on the shelves and conveyed to their listeners, viewers and readers "the only correct interpretation": the authorities "brought the people to the handle", the national policy of Nur-Sultan "proved its absolute failure", the country "accumulated a huge conflict potential ”in the interethnic sphere, which will inevitably lead to new clashes, which the local authorities will not be able to resolve. Well, and so on, in the same vein. The excellent coordination and a little more than 100% assessment, the opinions and forecasts expressed in well-defined media, no longer look like an attempt to minimize the state of Kazakhstan and those who manage it today in the eyes of the whole world. This, perhaps, looks like a very frank warning, and addressed in no case to more than just Nur-Sultan: “It only seems to you that we are far away and everything is under control in your countries! We will want it - and it will break out so that we put out the stew ... "I will allow myself to repeat once again what was said at the very beginning: in the United States recently they have ceased even pretending to have nothing to do with" color revolutions "and other, no less fun measures to overthrow legitimate governments. In Venezuela, for example, they did not initially bother with this, on the contrary, strongly emphasized the status of Guaido as his own protege.

In the USA, it’s now being demonstrated film with an extremely intriguing title: Impeachment. Biden's money. Mass killings. " In this documentary tape, where a lot of attention has been paid to the Ukrainian “Euromaidan”, all those versions of the events of 2014 that Kiev repeatedly declared “Kremlin propaganda” with voices in the mouth are voiced. No propaganda - solid American freedom of speech. And all the same irrefutable facts about the Georgian and other foreign snipers, the choice of shooting demonstrators, who were later declared "heroes" and police officers, later called criminals. And the recognition of the shooters that they did this at the request of those who subsequently seized power in the country as a result of a coup. The author of the film draws a parallel between the Euromaidan and the attempts to impeach Trump, speaking about the "machinations of Soros and Biden", thereby completely signing the main thing: American money and American politicians stood behind the "revolution of guides". Well, the truth is, those of them who are now defeated in a fight for power in their homeland and are recognized as "wrong." The most respectable American public, the fact that as a result the whole country was plunged into the hell of a fratricidal war and the horror of a completely colonial existence, is not shocking at all.

Some readers in their comments regularly undertake to reproach me with the fact that I see “American machinations” in any problems of our country, which, you see, are “catching my ears”. Well, why in any? Only somewhere around 90% about ... Over the ears, speak? The United States quite openly pursues a policy of “containing” Russia, “opposing” it, they are ready to support any country, nationalist movement, leader or statesman, if only he professes Russophobia and seeks to confirm his convictions with deeds. They will not leave our country alone for as long as it exists. Washington needs peace without the slightest influence of Moscow and Beijing, he does not agree to less. But for those who continue to believe in a good, generous, generous and peace-loving America, who don’t have a soul in Russia and its people, just waiting for it to be completely blessed, I can say: live on in this faith. What do you personally pay for it - in general, your problems. The trouble is that usually for such illusions, if they cover too many citizens, the whole country has to pay.
Ctrl Enter
Noticed oshЫbku Highlight text and press. Ctrl + Enter
We are
Putin's phenomenon is Russia's main problem
Ten "defeats" of Putin
Reporterin Yandex News
Read Reporterin Google News
Ad
The publication is looking for authors in the news and analytical departments. Requirements for applicants: literacy, responsibility, efficiency, inexhaustible creative energy, experience in copywriting or journalism, the ability to quickly analyze text and check facts, write concisely and interestingly on political and economic topics. The work is paid. Contact: [email protected]
5 comments
Information
Dear reader, to leave comments on the publication, you must to register.
I have an account? Sign in