“The Battle of Svalbard”: has Norway overestimated its strength? 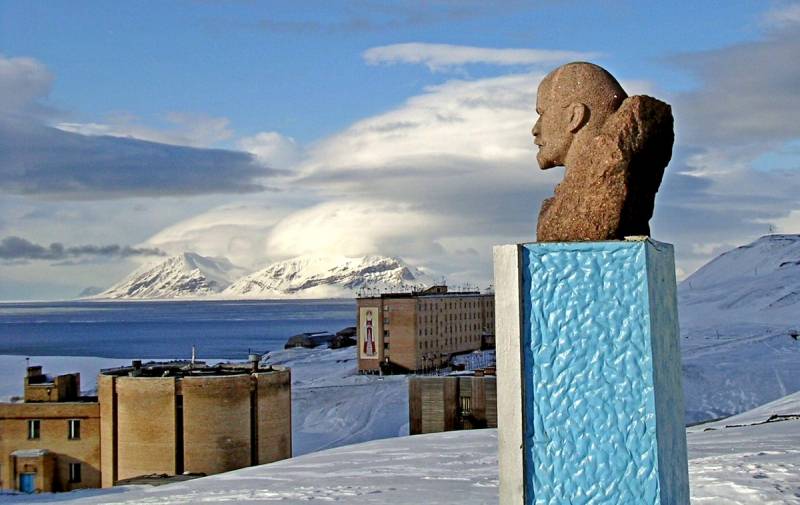 The recent statement by the Russian Embassy in Norway regarding Oslo’s increasingly unacceptable actions against our citizens and companies located and operating in Svalbard, in fact, did not reveal anything new to the world.


For several years now, our country has been trying, not by washing, to survive from this territory, to exploit which it has absolutely the same rights as the descendants of the Vikings, who for some time suffered from very selective "sclerosis" - moreover, in accordance with international law, and under Norwegian law. Why would Oslo abruptly step up actions aimed at “squeezing out” Russians from Svalbard? How far can this process go and how to end for its initiators?

As a matter of fact, before the beginning of the twentieth century, sharp rocks sticking out from the icy sea (namely, by the way, the name of the island is translated into Russian), among which white bears wandered sadly, did not cause any interest in principle. There were more attractive lands, as well as problems with their division. And only barely "fledged" in this difficult time as an independent state, Norway decided to suddenly declare them their own, and it is not very clear on what grounds. Well, there were no other territories in mind, we decided to take something closer. However, the "big" powers immediately aroused themselves, rightly estimating that with a reasonable location of naval bases and serious fortifications on it, Svalbard could turn into a major problem for local navigation. They convened a conference in Paris at that time in fashion, and decided to consider the island a kind of Norwegian territory, but with the preservation of the corresponding treatise for all signatory countries to conduct business there. The main thing for everyone was article 9 of the treaty, according to which the creation of any military facilities: naval bases, forts, batteries and other things, on Svalbard is not allowed for anyone and under any circumstances. Oslo was assigned to be the guarantor. Representatives of Soviet Russia also participated in the conference - then, in truth, few people paid attention to them. Well, they put autographs under tricky paper, got, it seems, equal rights with all - and so what ?! This is the Bolsheviks! Everything will fall apart tomorrow! Well, not tomorrow, so the day after tomorrow. Where else should they climb to the North? As it turned out, gentlemen Europeans thought so in vain.

Our traders and miners appeared on Svalbard already in the 30s. Moreover, back in 1925, the impudence of Norway reached the point that it declared the island an integral part of its territory, but did not dare to completely violate the Paris Treaty in Oslo. In the end, everything came to the conclusion that, in addition to the Norwegians themselves, only Russians began to develop the coal deposits found on Spitsbergen and to extract the abundant fish in the vicinity. Then the war broke out ... Now in the Norwegian media discussing the escalation of the conflict between our countries, one can come across allegations that "we never fought directly." A wonderful interpretation of history - in the best traditions of the samples accepted now in the West! What about the fact that in August 1943 the government of the Nazi protege Quisling officially declared war on the USSR? What of the SS legion that was found there in a fairly large number of volunteers, whose members subsequently became the backbone of the SS divisions Viking and Nordland? How about the fact that these, so that they were empty, the descendants of the Vikings were completely “marked” both under the besieged Leningrad, and near Murmansk, in the Baltic and other places? These berserkers are unfinished and have not stood up for a month, but they shed Russian and Soviet blood. In truth, after that, the USSR had every right to knock them out of Spitsbergen to hell. Nevertheless, the USSR repeatedly, for the last time in 1947, seems to have sent polite requests to the parliament there, wishing to obtain permission to establish its military base on the island. And he received a constant refusal, which ended with Norway joining NATO in 1949.

Alas, the incompletely resolved issue with Spitsbergen is one of the consequences of Comrade Stalin’s post-war attempts to "agree in a good way" with the West and establish good-neighborly relations with him based on mutual respect. Our peacefulness was not appreciated then and is not appreciated now. By escalating the situation around the island, carrying out consistent and systematic actions aimed at restricting the activities of Russia on it, Norway, in fact, is openly violating the provisions of the Paris Treaty, which was concluded with an infringement of the rights of our country, which at that time was not in a position to actively to defend them. In fact, there is a conscious escalation of confrontation, which, albeit purely theoretically, can lead to open clashes. What is Oslo counting on? It is decidedly impossible to take seriously the “power” of the armed forces there, including the navy. A very significant moment: in December last year, the Norwegian certification organization DNV GL banned the use of the latest and largest ship there, the Navy, as "representing a danger to its own crew." The KMN Maud integrated supply ship with a displacement of 27 and a half thousand tons, capable of transporting about 10 thousand tons of fuel and 400 tons of cargo, including ammunition, equipped with its own workshops, a hangar for helicopters and even a hospital, was to become the pride of the Norwegian navy. And it became a shame. 10 years of the shipbuilders' labors and $ 250 million were wasted on its creation - he could not get into working condition for half a year.

The experts who inspected the ship stated “unsatisfactory condition of materialtechnical base and lack of proper maintenance. " They ruined the boat, in a word. Against the background of another recent ridiculous loss of the Norwegian Navy, the frigate Helge Ingstad, which, after a collision with a tanker, is suited solely and exclusively for scrap, Oslo is extremely worried that now they "can not follow what the Russians are doing." In recent years, they have generally begun, to put it mildly, to be extremely nervous about the appearance on the horizon of any ship under the Andreevsky flag. Our sailors conduct maneuvers “not where needed”, too close to the precious Norwegian drilling rigs, although the combat training of the Russian Navy is carried out in strict accordance with international standards, in neutral waters and with notification to the Norwegian side. Something else is not being done - what is the story of “Russian jamming GPS during the Trident Juncture exercises in 2018”, which was seen by NATO fighters and was heavily exaggerated by the Norwegian side. What can I say - the other day, the head of the Norwegian Foreign Intelligence Service Morten Haga Lunne made a very concrete statement that "Russia is the main military danger" for his country. The main intelligence officer’s concern is, first of all, that our country “strengthens the basic structure on the Kola Peninsula and in the northern part of the Barents Sea, conducts frequent and large-scale military exercises, and also tests new types of weapons”. Well, what else remains for us - with such neighbors ?! Wait until they put us out of Spitsbergen altogether, and then, as in ancient times, will they arrange a dashing raid on our land?

Far to NATO, to Valhalla - high

What does he hope for when he appoints himself a “main enemy” of Russia for a country that has been compelled since 2014 to introduce (the fourth in the whole world!) A mandatory call for women in the actual military service? Even 12 years ago, the inspector general of the army there with a wonderful notch Robert Mood publicly stated that these "armed forces", which at that time consisted of less than 10 thousand people, "in which case" will be able to provide defense unless the territories between the two central metro stations in Oslo. In principle, nothing has changed dramatically since then. Oh yes ... Norway is a member of NATO and, in accordance with the most remarkable, fifth article of its charter, can sleep peacefully. Or can not? Something there, I remember, was organized in the structure of the North Atlantic Alliance - a force of terribly quick reaction with the ear of amusement for the Varangian descendants called Spearhead (Spike). This is the Norwegian warriors with the Germans and the Dutch “muddied”. Here are just more or less sane military experts in Oslo, almost unanimously agree that while these or any other comrades in the bloc get to the rocky Norwegian shores, local combatants will remain wet. So why provoke ?! There is no doubt - the main incentive for those who today in Norway is fomenting a conflict with Moscow is the hope that they will be able to hide behind the wide aircraft carrier "back" of the newly recreated 2nd fleet of the US Navy, the main task of which is precisely confrontation of Russia in the harsh latitudes of the North.

Moreover, according to the vice-admiral of the USA, who is leading the formation, Andrew Lewis, the forces and equipment entrusted to his command since the end of last year have “reached full operational readiness” and are just waiting for orders to show these Russians, who have become extremely brazen, where polar bears winter . Most likely, Oslo’s increased activity in creating the most uncomfortable conditions for the representatives of our country on Spitsbergen is precisely connected with Washington’s desire to get it at its disposal precisely to create its own 2nd fleet base there. It sounds more than logical and ideally fits into the intentions proclaimed by the United States to “ensure freedom of navigation” at all costs on the waves of the Northern Sea Route. If we take into account the words repeatedly heard from Moscow, including from representatives of the General Staff of the Armed Forces of Russia that foreign warships should not be there and will not be, then the reason for the conflict looms more than obvious. In this regard, in no case should Russia retreat from Svalbard, even if coal deposits were depleted there long ago and only the arrival of tourists brings profit. Once we succumb to the pressure exerted by the Norwegian side at the suggestion of NATO and, above all, the United States, to leave these places, “tourists” will immediately settle down there under the star-striped flag, who will have to be kicked out by “Caliber”. At least ... Moreover, using the centennial of the signing of the Paris Treaty as an occasion, Moscow itself needs to intensify the onslaught on its opponents, urging them to implement this agreement and making it clear about all the possible consequences of its violation, especially in terms of the demilitarization of Spitsbergen. We have no other way to defend our interests extremely strictly, neither in the North, nor in the South. Not anywhere else.
Ctrl Enter
Noticed oshЫbku Highlight text and press. Ctrl + Enter
We are
Putin's phenomenon is Russia's main problem
Ten "defeats" of Putin
Reporterin Yandex News
Read Reporterin Google News
Ad
We are open to cooperation with authors in the news and analytical departments. A prerequisite is the ability to quickly analyze the text and check the facts, to write concisely and interestingly on political and economic topics. We offer flexible working hours and regular payments. Please send your responses with examples of work to [email protected]
9 comments
Information
Dear reader, to leave comments on the publication, you must sign in.